These stocks all have the ability to make money -- even in bad economies.

Thus far in 2016, the stock market's performance hasn't been pretty. As of this writing, the Dow Jones Industrial Average and S&P 500 are both down by more than 8.5% since Jan. 1, and the NASDAQ has performed even worse with a 10.2% decline. During volatile times like these, there are certain stocks that you want to have in your portfolio.

Recession-resistant retail
Granted, there are many retailers that are struggling or even going bankrupt due to increased competition from online retailers. However, retail REIT Realty Income's properties are different. Specifically, the majority of the nearly 4,500 properties the company owns can be classified into one or more of three types of retail:

This business model does seem to be rather recession-proof. Realty Income's occupancy rate has never fallen below 96%, and the company has been able to increase its dividend for 73 consecutive quarters.

Strong trends, even in a bad economy
Welltower is a REIT that specializes in healthcare properties, particularly senior housing and long-term care facilities. Not only does Welltower have a proven track record of smart investments, but there is good reason to believe that demand for these types of properties will grow rapidly in the coming years, regardless of what the economy does.

Specifically, the populations of Welltower's markets (U.S., U.K., and Canada) are aging rapidly. In the U.S., the 85-and-over population is expected to triple between now and 2050. Canada's 75-plus population is growing at seven times the overall population's growth rate. 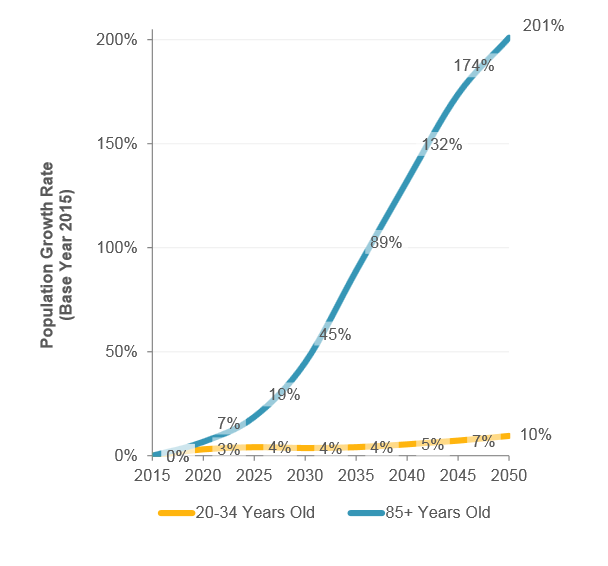 All of this translates into a need for housing and medical facilities that will need to be fulfilled, even if the market crashes or the economy is bad for some time. Welltower has been in business since 1970 and has delivered consistent, market-beating returns and dividend growth over the past 45 years.

A low breakeven point gives a lot of breathing room
One of my personal favorite REITs is Public Storage, which is the strongest brand name of these three REITs thanks to its widespread network of orange-colored storage facilities.

I'm a big fan of Public Storage for two main reasons. First, it has been successful at delivering outstanding shareholder returns without using much debt. In fact, the company carries virtually no debt, although it has stated that this may change while rates remain low.

Second, I love the self-storage business itself. It has much lower expenses than most other forms of real estate -- for instance, self-storage facilities don't need to be renovated or reconditioned nearly as often as apartments or offices. This means that the business doesn't need to make as much money to cover its expenses and turn a profit.

In fact, Public Storage stated in its most recent annual report that it only needs a 30% occupancy rate in order to break even. Currently, its storage facilities are more than 90% occupied, meaning that it could absorb a loss of more than half of its tenants and still remain profitable.

Just a starting point
All three of these REITs are excellent investments to buy if you are worried about a market correction or crash, and I've included links to more in-depth discussions of each one. Keep in mind, however, that there are plenty of other recession-resistant stocks out there in addition to these. By applying the principles mentioned here -- products people need, low debt, favorable demographics -- you can construct a stock portfolio that can withstand any economic environment.

Matthew Frankel owns shares of Realty Income and Welltower. The Motley Fool recommends CVS Health and Welltower. Try any of our Foolish newsletter services free for 30 days. We Fools may not all hold the same opinions, but we all believe that considering a diverse range of insights makes us better investors. The Motley Fool has a disclosure policy.