Please ensure Javascript is enabled for purposes of website accessibility
Log In Help Join The Motley Fool
Free Article Join Over 1 Million Premium Members And Get More In-Depth Stock Guidance and Research
By Tyler Crowe, Jason Hall, and Matthew DiLallo - Jan 16, 2016 at 9:20AM

It may not be time to buy oil stocks indiscriminately, but Conoco Phillips, Helmerich & Payne, Inc., and Phillips 66 look like pretty compelling investments for 2016.

The oil market's long slide has been going on for long enough now that you can start to see value investors kicking the tires on the energy sector. There is still a chance there is more pain ahead, but at today's depressed prices, there's also a very good chance that picking up shares in 2016 could turn into some very impressive returns over the coming years.

We asked three of our energy contributors to highlight a company in the oil and gas sector they think has a good chance of performing well in the future and is worth buying in 2016. Here's what they had to say.

Matt DiLallo: The oil market is notoriously cyclical, and it's currently in the midst of its most bearish down cycle in decades. That said, while times are clearly tough right now, there do appear to be better days ahead. That's because the current oil price is way too low to sustain production, let alone grow it to meet growing demand. While there's no telling when the next up cycle will occur, ConocoPhillips (COP 0.49%) is one of the top oil stocks to own through the recovery.

ConocoPhillips has two key ingredients that are crucial at this point in the cycle. First, it has an A-rated balance sheet, which gives it nearly unparalleled financial flexibility. That strength provides the company with the ability to continue to fund long-term investments at a time when a lot of its peers are only focusing on the short term. Further, its financial strength virtually assures it will be around when the up cycle finally arrives.

The other key factor is the company's diversified low-cost global resource base. This portfolio of resources consists of two key components: low-decline cash flowing assets such as oil sands and LNG as well as high-return short-cycle assets such as shale. This diversification does two things for the company. First, it provides it with a stable base of production that produces cash flow during the downturn, while also providing strong upside potential to be captured when conditions improve.

Overall, ConocoPhillips offers a great blend of stability and upside, making it one of the best oil stocks to buy for what could a very unpredictable year.

Tyler Crowe: Here's one of the things about investing in oil stocks in 2016. It's entirely possible that we don't see a recovery in oil prices this year. Since there is so much uncertainty in what oil prices will do and the potential ramifications on the balance sheets of oil stocks, investors are best off investing and building their positions in the highest-quality companies in the space. One company that fits this description is Helmerich & Payne (HP 0.48%).

Helmerich & Payne has been around a long time and is one of the premiere land rig owners in the oil patch, but what makes it so compelling right now is that it was one of the companies that had the foresight to convert its fleet of rigs to handle the complex drilling used in hydraulic fracturing. This newer, more capable fleet has helped it almost double its market share, mostly at the expense of its larger competitors. 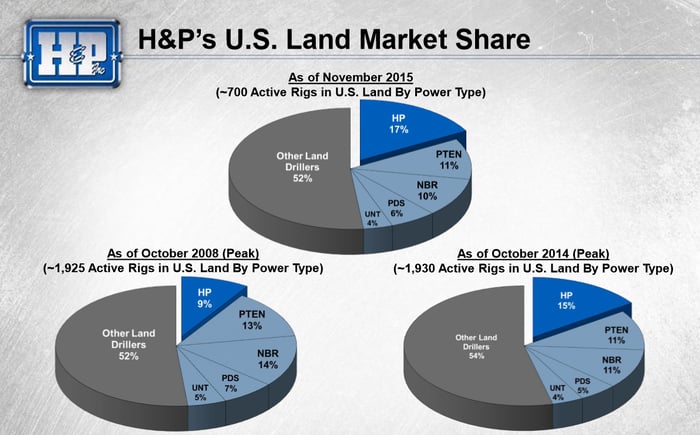 What is even more impressive about this fleet conversion is that the company has been able to keep a very tidy balance sheet the entire time. In fact, even after 18 months of slumping oil prices, Helmerich & Payne still has more cash on the balance sheet -- about $750 million -- than total debt. This, in large part, has to do with the company's management taking a very prudent approach to capital allocation over the years and the acknowledgement that this is a very cyclical business that can go through these very rough patches.

Helmerich & Payne won't see any large uptick in earnings until drilling activity increases again, and that will require higher oil prices. In the meantime, though, investors can build a position in this high-quality company and let this dividend aristocrat pay you a strong yield while you wait for the oil industry's turnaround.

Jason Hall: One of the world's biggest oil refiners, Phillips 66 (PSX 0.12%) is a lot more. Oil refining is incredibly expensive, and not much of a growth business, but it's very lucrative and has been the company's cash cow since it went public as a spinoff of ConocoPhillips in 2012.

But instead of investing huge capital to grow refining with limited potential returns, management is investing in growth segments including natural gas pipelines, export facilities for NGLs like propane, and its petrochemicals business.

Furthermore, the company is largely insulated from the falling prices of oil and gas. Yes, cheap oil will mean lower revenues, and the narrowing spread between Brent crude and lower-cost North American crudes that Phillips 66 can buy will have some impact on profits, but since the company is a buyer, not a producer, it benefits from lower manufacturing costs when feedstocks fall.

Looking long term, demand for things like fertilizer, car tires, fabrics, and plastics is only increasing with a growing global population, and natural gas is a major ingredient in their manufacture. Phillips 66 is positioning itself to be a major player in both distributing natural gas and using it in manufacturing.

Don't just take my word for it. Over the past year, Warren Buffett has invested almost $5 billion in it, making it one of Berkshire Hathaway's largest holdings, and giving the company an 11% stake in Phillips 66. With shares down 5% this year and 18% from their all-time high in November, Phillips 66 should be high on your list of top oil stocks for 2016.