Biotech stocks are undoubtedly fertile ground for market-beating returns. After all, the performance of the industry as a whole has far outpaced the broader markets over the past five years running: 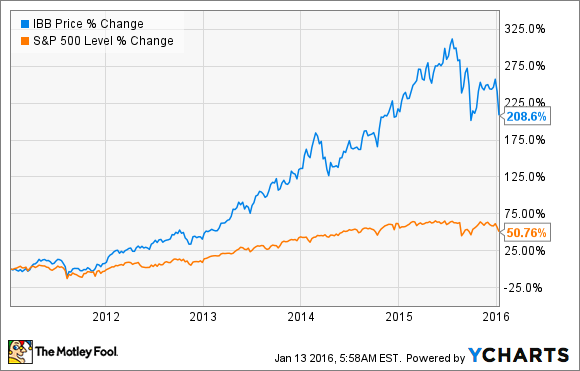 Despite this impressive track record, though, biotech has certainly had more than its fair share of outright duds during this five-year span. The common theme that ties most of the biggest losers in biotech together is an over-reliance on a single keystone product candidate, and perhaps an overzealous shareholder base as well.

Armed with this insight, I think Celldex Therapeutics (NASDAQ:CLDX), Inovio Pharmaceuticals (NASDAQ:INO), and Novavax (NASDAQ:NVAX) are three clinical-stage biotech stocks that could produce monster returns for investors this year with limited downside risk. Here's why.

Celldex is a well-diversified immuno-oncology developer nearing a pivotal data readout
Although Celldex's EGFRvIII-positive glioblastoma vaccine candidate Rintega has grabbed most of the headlines because of its recent success in the second-line setting and the fact that it's approaching another data readout in the front-line setting, investors would be wise to dig deeper into the company's broad portfolio of oncology product candidates.

Even so, the stock market hasn't been kind to this clinical-stage oncology company lately, sending its shares lower by more than 22% in the first two weeks of January: 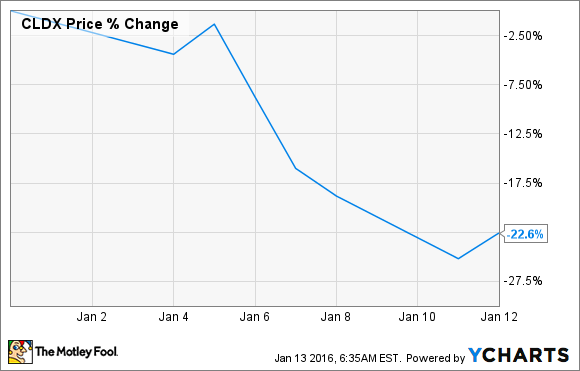 Despite this horrendous start to 2016, the average 18-month price target for Celldex stands at a whopping 206% higher than current levels, according to analysts polled by S&P Capital IQ. While that may seem far-fetched, such astronomical price swings are not uncommon in biotech, especially among stocks with potentially game-changing products under development such as Celldex's Rintega.

If Rintega turns out to be an effective treatment for this particularly aggressive form of brain cancer in the front-line setting, I'd personally be surprised if this stock didn't make such a quantum leap. Having said that, I think the market has already priced in a late-stage flame-out for Rintega after this pullback, and it doesn't appear to be putting much faith in the company's remaining immuno-oncology assets as well.

Inovio is a novel vaccine maker to watch in 2016
Vaccine specialists tend to get bought out immediately after posting promising midstage results because these kinds of products often have long shelf lives and reasonable profit margins. Inovio seems to be taking a different path, however.

Despite posting strong midstage study results for its experimental cervical dysplasia vaccine candidate, VGX-3100, the company remains an independent entity, although it has partnered with several big pharmas to build out its DNA-based vaccine portfolio.

Looking ahead, Inovio is expected to initiate a late-stage trial for VGX-3100 this year, putting the company one step closer to becoming a commercial operation. After that, there's a good chance that some of the company's collaborative studies with its big pharma partners will generate preliminary data readouts over the course of 2016. 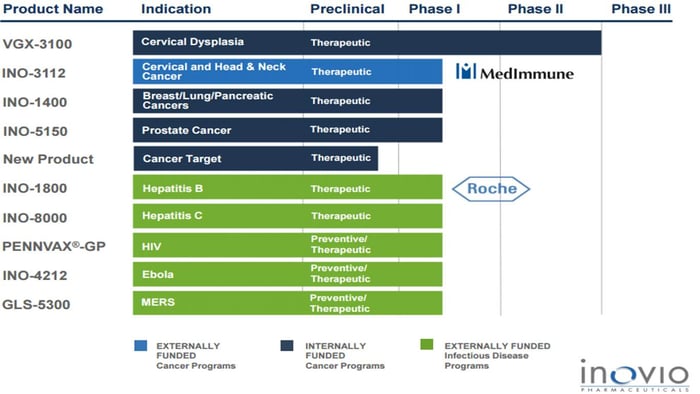 If Inovio is able to hit on some or all of these collaborative studies with its big-pharma partners, it stands to reason that the company's share price will benefit in a big way. In fact, the Street thinks that Inovio's stock could appreciate by a stunning 277% over the next year and change, presumably based solely on the progress of the company's clinical pipeline.

Novavax is nearing an inflection point
Novavax is another clinical-stage vaccine maker that has taken a go-it-alone approach for the most part, and that's been extremely beneficial to its shareholders over the last few years.

Because of the rapid progress of its experimental respiratory syncytial virus (RSV) vaccine, Novavax's shares have risen by more than 230% in the past three years alone: 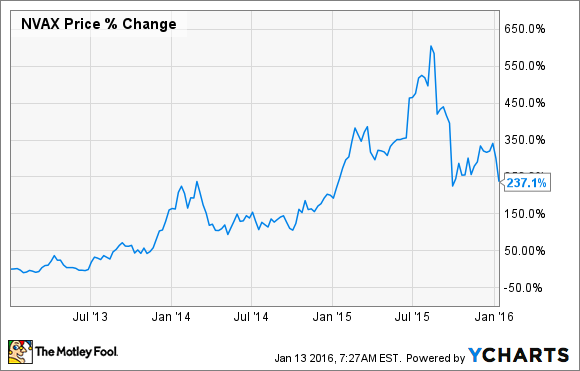 With the vaccine now in a pivotal stage 3 study for elderly patients and about to start another one in pregnant women, analysts seem to think Novavax will continue this upward trend. The average price target for this stock sits at a noteworthy 150% higher than current levels.

Breaking this price target down a bit, the core issue is that this vaccine is believed to have blockbuster potential because of the enormous size of the RSV market and the dire need for new treatments in at-risk populations.

According to the CDC, for example, over 14,000 elderly individuals die from RSV in the U.S. every year. So, we're talking about a vaccine, if approved, that would probably be recommended for every person aged 65 and older.

Are these stocks compelling buys right now?
After starting the year off on the wrong foot, these three speculative stocks now appear to be particularly compelling bargains. While I wouldn't exactly recommend backing the truck up so to speak, these stocks do offer risk-tolerant investors enormous upside potential, along with the added benefit of well-diversified clinical platforms that should soften the blow in case their lead product candidates turn into pumpkins.