Quarterly earnings reports from two of the market's best-performing stocks are on tap for the trading week of Jan. 18 to Jan. 22.

Despite a solid jump on Thursday, stocks posted significant losses last week. The Dow Jones Industrial Average (^DJI 1.27%) and the S&P 500 (^GSPC 1.73%) both fell by 2%, bringing their year-to-date declines to a brutal 8%: 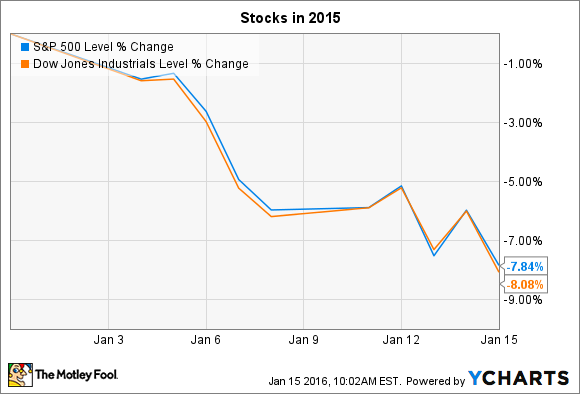 The shortened trading week ahead (markets are closed on Monday) kicks fourth-quarter earnings season into high gear. In fact, two of the 10 best-performing stocks of 2015, streaming-video titan Netflix (NFLX 2.72%) and coffee giant Starbucks (SBUX 1.19%), will post their Q4 results over the next few days. Meanwhile, Bank of America (BAC 1.09%) is on deck to update investors on its lending operations.

Tuesday, Jan. 19: Netflix's subscriber growth
Grab some popcorn and get comfortable, because last year's best stock is due to post its first quarterly report of 2016 after the closing bell on Tuesday. Streaming-video giant Netflix is riding high after owning the spotlight at this year's Consumer Electronics Show. In his keynote address to the crowd, CEO Reed Hastings dramatically flipped the switch and pushed Netflix's service into 130 additional countries -- a year ahead of schedule.

Yet the stock is down headed into this week's report. Investors are nervous that Hastings might miss his U.S. subscriber growth target. That's possible. After all, management provides their best guess for growth each quarter and they expect to be wrong on the high side roughly as often as they're wrong on the low side.

Their latest outlook calls for 5.15 million new members in Q4, 70% of which should come from outside of the U.S. Beyond domestic and international subscriber growth, executives will likely discuss original content strategy, debt plans, and possible pricing changes. Investors can watch a live discussion of the earnings results on Netflix's YouTube channel starting at 5 p.m. ET.

Tuesday, Jan. 19: Bank of America's profitability
Also on Tuesday, Bank of America is due to post fourth-quarter earnings results before the market opens. Consensus estimates peg revenue as rising by 5% to $19.9 billion as earnings tick up to $0.26 per share from $0.25 per share a year ago.

Beyond those headline figures, the number to watch will be profitability. Specifically, keep an eye on return on assets. The lender last posted a sequential decline in ROA, yet Q3 marked an important milestone: It was the first time since the financial crisis that Bank of America managed four straight quarters of steady profits.

CEO Brian Moynihan and his executive team still have work to do in order to reach their profitability goal of consistently booking above 1% ROA (Q3's figure was 0.82%, down from 0.99% in Q2). But rising interest rates from the Federal Reserve might spur positive comments from Moynihan on the lender's operating prospects over the coming year.

Thursday, Jan. 21: Starbucks' customer traffic
After a record fiscal 2015, Starbucks is looking to start its new fiscal year on a strong note. CEO Howard Schultz and his team believe they can produce double-digit revenue growth in 2016 by opening 1,800 new stores (including 900 in its China region) and by posting global comparable-store sales growth near last quarter's fantastic 8% gain.

Within that comps figure, investors will be watching to see if customer traffic trends remain robust. Starbucks booked a 3% transaction improvement over the past 12 months, making its biggest problem about satisfying demand, rather than generating it. In response, management is using strategies like mobile ordering, smaller stores, and even delivery to keep those coffee lines moving as quickly as possible.

Are We In A Recession? How It Could Affect Your Stocks