It was a volatile day on Wall Street. Indexes dove by as much as 3.5% before recovering to end the trading session with far less dramatic losses. By the closing bell, the Dow Jones Industrial Average (DJINDICES: ^DJI) had lost 250 points, or 1.6%, and the S&P 500 (SNPINDEX: ^GSPC) shed 22 points, or 1.2%. 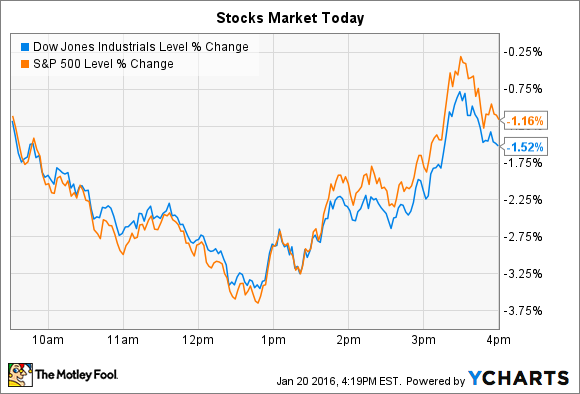 Sales of $22.06 billion amounted to a 2% drop after accounting for currency fluctuations. On that basis, IBM saw revenue growth in its global tech services and its hardware divisions, while it's software segment showed the biggest contraction. Still, management stressed the fact that IBM booked faster gains (up 16% this quarter) in its strategic priorities of cloud, analytics, and mobile. "We strengthened our existing portfolio while investing aggressively in new opportunities," CEO Ginni Rometty said in a press release .

Net income of $4.5 billion was flat against the prior year period, but only after adjusting for a gain that the company logged last year through the sale of its System x business. Including that prior-year boost, reported earnings per share fell 17% to $4.84, or just above consensus estimates.

In a conference call with investors, IBM provided an initial profit outlook for 2016 that calls for operating earnings to slump to $13.50, which would mark a second straight year of double-digit EPS declines. Most of that decline will be courtesy of foreign currency swings, which don't reflect any underlying weakness in the business. Yet investors likely aren't excited about the prospect of back-to-back 10% annual profit drops for this tech giant .

Bank of America targets a more profitable 2016
Bank of America's stock fell 4% a day after the finance titan posted its fourth-quarter results. Shares are now down 18% since the start of 2016, compared to a 9% drop for the broader market.

The bank's Q4 figures showed huge improvements in the business, yet they also made it clear that CEO Brian Moynihan and his executive team have significant operating challenges ahead of them. On the plus side, Bank of America wrapped up its most profitable year in almost a decade. Fourth-quarter earnings were $3.3 billion, or 10% higher than the prior year period. "Continuing the trend from last quarter, we saw core loan and deposit growth, higher mortgage originations, and increased wealth management client balances," Moynihan said in a press release.

But return on assets remained far below the company's long-run target of at least 1%. ROA came in at 0.64%, up only slightly from the 0.57% it managed a year ago. If the company can't push that efficiency higher, then its profit production will continue to trail rivals. But, if Bank of America can hit its ROA goal, then today's prices could mark a cheap entry point for long term investors.

Demitrios Kalogeropoulos has no position in any stocks mentioned. The Motley Fool recommends Bank of America. Try any of our Foolish newsletter services free for 30 days. We Fools may not all hold the same opinions, but we all believe that considering a diverse range of insights makes us better investors. The Motley Fool has a disclosure policy.