Last year was an exceptional year for Valero Energy (VLO 0.57%), evidenced by its stock surging 40%. Unfortunately, the company hasn't been able to maintain that momentum in 2016 and is already down double digits since the start of the year. Here are three reasons it could continue to fall.

1. Gasoline supplies keep growing
Aside from the dour mood of the market, one of the weights pulling Valero's stock down in 2016 has been surging gasoline supplies, which have grown far above expectations:

Due to a combination of strong supplies from refiners and weaker-than-expected demand from consumers, gasoline inventories are well above the upper limit of the average range for this time of year, according to the EIA. If this keeps up, it could eventually squeeze refining margins, which would put pressure on Valero's earnings and its stock price.

2. Oil prices unexpected rally sharply
One of the reasons surging gasoline supplies are a bit of a surprise is because oil prices have continued to come down, which is pushing gasoline prices lower. That typically fuels a demand response from consumers, which was evidenced by a 2.6% increase in gasoline demand last year. In 2016, however, gasoline demand is only expected to grow by 0.8%, assuming oil prices remain in their weakened state, which would keep a lid on gas prices.

If oil prices, on the other hand, rebound sharply in 2016, it could put the brakes on gasoline demand growth. That, likewise, could also put a damper on Valero's margins and hit its stock.

3. Unexpected refinery outages
Finally, and more specific to Valero, is the potential for an unplanned outage at one or more of its refineries. While the company routinely shuts down its refineries for scheduled maintenance, unplanned outages can have a big impact. For example, one of the more extreme unplanned outages in recent years was when an explosion rocked ExxonMobil's (XOM 0.29%) Torrance, Calif., refinery on Feb. 18, 2015. That incident had an immediate impact on ExxonMobil's stock price, which fell sharply after news hit the market: 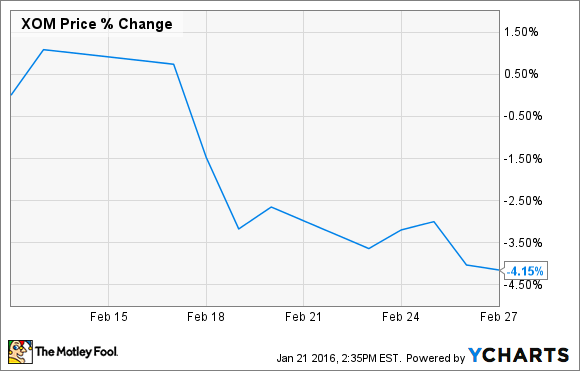 This is despite the fact that ExxonMobil is the largest integrated oil company in the country, and this refinery's operations were just a small part of the company's overall operations. In fact, in a sign of just how insignificant this refinery is to the company, Exxon has already agreed to sell it to another refiner once repairs are complete. Still, if something like this can move Exxon's stock, imaging what it could do to Valero's.

Another more recent example of an unplanned outage happened at BP's (BP 1.70%) refinery in Whiting, Ind., last August. Due to leaking pipes, BP shut down three distillation units, which cut its capacity by 50%. That capacity was down for a while so BP could fix the problem.

If a similar unplanned outage were to happen at one or more of Valero's refineries, it could have a noticeable impact on the company's performance. That's because such an outage would not only cost money for the repairs, but it would cost the company lost volumes during the downtime.

Investor takeaway
A number of factors, both internal and external, could cause Valero's stock to fall. That's not to say the stock will fall, but it is a reminder that the company has a unique set of risks investors need to monitor.

Matt DiLallo has no position in any stocks mentioned. The Motley Fool owns shares of ExxonMobil. Try any of our Foolish newsletter services free for 30 days. We Fools may not all hold the same opinions, but we all believe that considering a diverse range of insights makes us better investors. The Motley Fool has a disclosure policy.