Over the past 18 months, the graphics card market has experienced a dramatic shift. The fortunes of the two major players, NVIDIA (NASDAQ:NVDA) and Advanced Micro Devices (NASDAQ:AMD), have diverged, and NVIDIA now claims a unit market share in excess of 80%. This is up from about 60% during the second quarter of 2014.

The shift began in late 2014, when NVIDIA launched two graphics cards based on its Maxwell architecture. The GTX 970 and GTX 980, initially priced at $329 and $549, respectively, proved to be disruptive, forcing AMD to slash prices on its latest line of graphics cards, the 200 series. The GTX 970 offered roughly the same performance as AMD's high-end 290X, which was priced at $499 at the time, while consuming significantly less power.

It took until June 2015 for AMD to respond. The company launched brand-new high-end graphics cards, the Fury and Fury X, which only served to catch up to NVIDIA in terms of performance, while its 200 series was rebranded as the 300 series, bringing minor performance gains. By this time, NVIDIA's market share had reached a dominant level, and while the lackluster launch stanched the bleeding for AMD and stabilized its market share, the new status quo heavily favored NVIDIA.

If there's one chart that demonstrates NVIDIA's dominance, as well as the predicament that AMD finds itself in, it's this one: 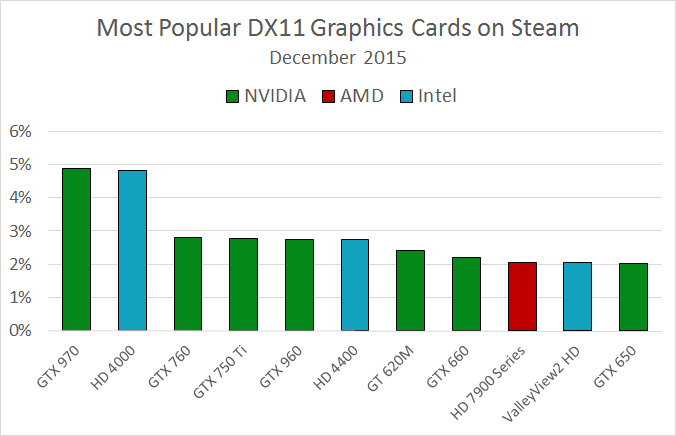 The chart above shows all of the DirectX 11 graphics cards that registered at least a 2% share of Steam users during December 2015. NVIDIA's GTX 970 is at the top of the heap, and it's only been getting more popular, rising nearly one percentage point since August despite the card being well over a year old. Intel's integrated graphics also have a strong presence, a testament to the improvements Intel has made in the area of graphics over the past few years.

Meanwhile, only the 7900 series from AMD, which includes three different cards launched in 2012, managed to make it on the graph. The entire 200 series from AMD had a share of just 1.57%. AMD's 300 series doesn't make an appearance at all -- it may be rolled into the 200 series' numbers, since they're essentially the same cards, but either way, it's clear that the launch has had little effect on NVIDIA's dominance.

It wasn't always like this. Here's the same chart for December 2011: In late 2011, DirectX 11 graphics cards were the minority on Steam, but this data gives us a good idea of what PC gamers were buying at the time. As you can see, AMD had a much stronger presence, claiming the top spot along with eight of the 15 most popular graphics cards.

The popularity of AMD graphics cards among Steam users has slumped by nearly one-third over the past four years. From December 2011 to December 2015, AMD's total share on Steam fell from 38.86% to 26.63%, holding up better than its share of the graphics card market only because of the continued use of its legacy products, many of which the company no longer supports with driver updates.

The situation is dire for AMD, but a comeback isn't out of the question. Both AMD and NVIDIA plan to launch new lines of graphics cards this year, and both are promising big gains in performance and efficiency. Both NVIDIA's Pascal and AMD's Polaris GPUs will be built on newer nodes, with NVIDIA reportedly using Taiwan Semiconductor Manufacturing's 16-nanometer process, and AMD using both Taiwan Semi's 16-nanometer process and GlobalFoundries' 14-nanometer process. Both companies have been stuck at 28 nanometers for years, so this change alone should help boost efficiency.

Both NVIDIA and AMD will also be using the second generation of high-bandwidth memory, which promises dramatic improvements in memory bandwidth. This will be important as virtual reality and 4K displays become more common, as the number of pixels per second needing to be processed, as well as the amount of data in general, will be substantially higher.

For AMD, 2016 will be a big year for its graphic business. The company will need to launch Polaris on time, and its graphics cards will need to at least match NVIDIA's efforts in order for the company to gain back any market share. Another disappointing launch, like the one we saw in 2015, could be catastrophic for AMD.