Perhaps you have built a large nest egg over time, or perhaps you've stumbled into a lot of money lately (I'm talking to you, Powerball winners). Either way, investors out there with pretty sizable portfolios still have to put that pile of money to work somehow, otherwise it will slowly dwindle away until there's little left. If you have a considerable amount of wealth already, letting that money go to work and collecting dividend checks can be a great way to preserve that capital while being up close and personal with Robin Leach.

So, we asked three of our contributors to highlight a company that would fit well in a portfolio that's looking to generate high yield through dividends for those high-net-worth investors.

Todd Campbell
If you're sitting on a portfolio large enough to handle a bit of risk but are still eager to reap the benefit of a healthy dividend, you might want to consider adding AbbVie (NYSE:ABBV) to your holdings.

Despite it paying a market-trouncing dividend yield of 5.7%, investors have shied away from AbbVie over concerns that biosimilar generic alternatives to its top-selling Humira will derail sales and profit.

The risk of biosimilars to Humira is real and shouldn't be ignored, but investors may want to temper their bets that Humira's sales will plummet. Recently, AbbVie's management outlined its guidance for the next five years, and included in it was a prediction that, despite the generic threat, Humira's sales will grow to more than $18 billion in 2018 from about $14 billion in 2015.

If Humira can keep biosimilars somewhat at bay, then AbbVie's top line should benefit from a flurry of R&D and its recent acquisition of fast-growing cancer drug Imbruvica. The company thinks it could launch 20 new drugs by 2020, and that Imbruvica's annual sales could climb to $5 billion from their current $1.2 billion pace.

Overall, AbbVie is projecting revenue of $37 billion in 2020, and that's far higher than the roughly $24 billion it's bringing in now. If management can deliver on that forecast, you can bet there will be plenty of dividend increases coming over the next few years!

Andres Cardenal
Wealthy investors typically own a relatively large portfolio, which means they can assume above-average risk in the hunt for undervalued opportunities, since a bigger portfolio in relationship to your financial needs means higher risk tolerance. With this in mind, Las Vegas Sands (NYSE:LVS) looks like a remarkably attractive choice for dividend investors looking for huge yields and compelling upside potential.

Las Vegas Sands is being hurt by weak gaming demand in Macau, which is a major headwind for all casino operators in the region. Problems in Macau should be transitory by nature, though: Once the economy in China turns for the better, Las Vegas Sands should profit from booming demand due to the rise of the Chinese middle class in the decades ahead.

Gaming is a remarkably profitable industry, and the business generates healthy profitability through both good and bad economic times. Las Vegas Sands reported an adjusted EBITDA -- earnings before interest, taxes, depreciation, and amortization -- margin of around 36.4% of revenue during the third quarter of 2015. This means financial strength is no big reason for concern at this stage.

Las Vegas Sands has a rock-solid track record of dividend payments: It has increased dividends from $1 annually in 2012 to $2.88 in 2016. This represents an annual growth rate in dividends of over 30% through this period. At current prices, Las Vegas Sands stock is paying a big dividend yield of nearly 7.5%.

Tyler Crowe
Whether you're wealthy or not, investing in strong dividend-paying stocks will always help give your portfolio a certain level of stability. For those with larger portfolios, hefty dividend payments can be used to make new additions to the portfolio, similar to how the Berkshire Hathaway empire was built. Typically, high yield and stability don't go together often, because companies overpromise on their dividends and ultimately need to cut them. However, one company that can provide some sizable dividends without adding unnecessary risk to one's portfolio is Holly Energy Partners (NYSE: HEP).

Holly Energy Partners is a oil and gas midstream and transportation company that is a subsidiary partnership of independent refiner HollyFrontier (NYSE:HFC). The company operates a system of petroleum product and crude pipelines, storage tanks, and distribution terminals that mostly support HollyFrontier's refining business.

What really separates Holly Energy Partners from many of its master limited partnership peers that have been in trouble lately is that the management team has a much more conservative approach to growth and payouts to shareholders. This has allowed the company to avoid many of the pitfalls that have led to dividend and distribution cuts for other players in the space. 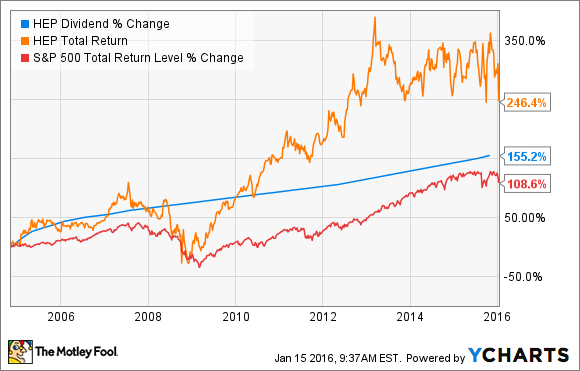