The markets ended the week better than it started, which is a welcome sign given the rough start to 2016.

Hooray! Oil prices managed to rally higher for a second day, to finish Friday at roughly $32 a barrel. However, Robbie Fraser, commodity analyst at Schneider Electric, essentially says to take it with a grain of salt, according to MarketWatch.

"There is really no fundamental change that can justify this two-day surge in prices," Fraser told MarketWatch, "More than anything, I think we're seeing a short-covering rally and the impact of unusually high volatility throughout global markets this year."

In other news, existing-home sales rose 14.7% in December from the previous month, beating estimates and rising to a seasonally adjusted annual rate of more than 5.4 million, according to the National Association of Realtors.

It was a volatile week for the cybersecurity company FireEye, (MNDT). The company was down early in the week before a couple of positive developments lifted the stock and fueled a rebound on Friday. 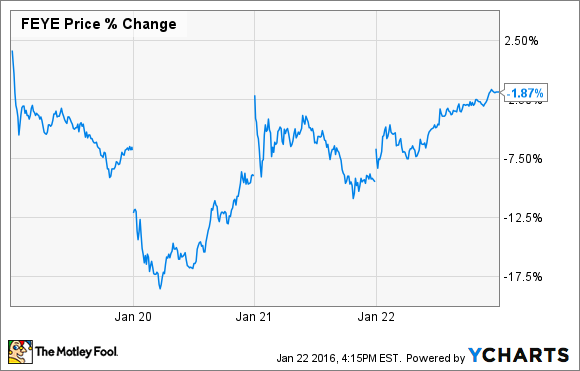 FireEye jumped almost 10% mid-week after it pre-announced fourth-quarter results. While the company announced that revenue would end up below analyst expectations, checking in between $184 million to $185 million, it also expects positive operating cash flow of between $7 million to $9 million where analysts had expected a loss. FireEye CEO Dave DeWalt went as far as to say billings could increase "organically by 20% and achieve positive free cash flow for 2016."

FireEye also announced a $200 million purchase of privately held iSight Partners. The deal calls for FireEye to pay an additional $75 million in cash and stock to iSight shareholders if the business meets specific targets through mid-2018. However, even at the potential $275 million price, it's still a fraction of the $1 billion valuation that iSight CEO John Watters hoped to get in a potential IPO that had been previously discussed.

As a business, iSight fits well, as the company is dedicated to predicting potential attacks, and has a network of 250 agents across 17 countries that keep an eye on, and gather information regarding, potential cybersecurity threats.

Verizon Communications (VZ -2.08%) added 1.5 million new wireless customers during the fourth quarter, which helped the company generate an adjusted earnings per share of $0.89 cents, $0.01 above analyst estimates. Verizon's revenue during the fourth-quarter rose 3.2% compared to the prior year, to $34.25 billion, again slightly ahead of analyst estimates of $34.1 billion.

Verizon is the strongest wireless carrier in the U.S. thanks to its high-quality network, and strong consumer loyalty. That's amplified by the fact Verizon has made a habit of adding dissatisfied subscribers from other service providers.

Arguably the best thing from Verizon's fourth-quarter results was its monthly postpaid customer churn, or cancellation rate, which declined from 1.14% during the prior year's fourth quarter to 0.96%. Despite a good, but not great, fourth quarter, management has already expressed that 2016 is likely to be a tougher year, and that its earnings would plateau.

Checking in with the industrials sector, General Electric (GE -2.86%) managed to report growth in its core earnings and revenue during the fourth quarter. However, as many expected with plunging oil prices, its industrials business slid because of its power and oil-and-gas segments.

Excluding GE's finance business, which is winding down, the company reported a profit of $0.52 cents per share, with revenue checking in at $33.8 billion. General Electric's report topped earnings per share estimates of $0.49 per share, but missed revenue estimates of $35.96 billion.

"We are reaffirming the goals we have laid out for 2016: operating EPS of $1.45-1.55, 2%-4% organic growth, core margin expansion, cash generation of $30-$32 billion, and $26 billion returned to investors." said General Electric Chairman and CEO Jeff Immelt, in a press release.