Please ensure Javascript is enabled for purposes of website accessibility
Log In Help Join The Motley Fool
Free Article Join Over 1 Million Premium Members And Get More In-Depth Stock Guidance and Research
By George Budwell, Tyler Crowe, and Steve Symington - Jan 26, 2016 at 8:20AM

Our Foolish contributors think Enterprise Products Partners, Nike, and Pfizer are three stocks investors in their 60s should consider adding to their portfolios right now.

Investing in later life can be tricky business. After all, it's not the time to start taking on undue amounts of risk. Moreover, your portfolio should start to produce at least a portion of your annual income at this stage in life, placing a heavier emphasis on stocks that pay a dividend that's sustainable for the long term.

Armed with these insights, our Foolish contributors think Enterprise Products Partners (EPD 1.35%), Nike (NKE -1.13%), and Pfizer (PFE -0.50%) are three choice stocks for investors in their 60s. Here's why.

Tyler Crowe: I'm not in my 60s, but I'm going to go out on a limb and say people that age are probably looking for some income investments so they don't have to work as much. If that's the case, then one stock to consider is Enterprise Products Partners. Yes, the company is in the energy sector, and watching stock prices decline 40% in a year can cause some people to make some pretty irrational decisions, but if you look at it purely as an income investment, you'll see something very different.

Enterprise Products is a transportation and logistics specialist for the oil and gas industry. It owns one of the largest networks of pipelines in the nation as well as a loads of storage terminals and gas processing facilities. What makes this network so effective as a profit generator is that the company's management team looks to lock in commitments from its customers to fixed fees and minimum volumes. This, combined with a steady stream of new assets coming online, or timely acquisitions, has generated a relatively stable and modestly growing cash flow stream that supports its payout to investors.

What also makes Enterprise Products Partners compelling for income investors is that unlike other pipeline companies that have pushed payouts and growth plans to unsustainable rates, Enterprise's management has taken a much more conservative approach. This has given the company the ability to raise its dividend like clockwork for almost 20 years. 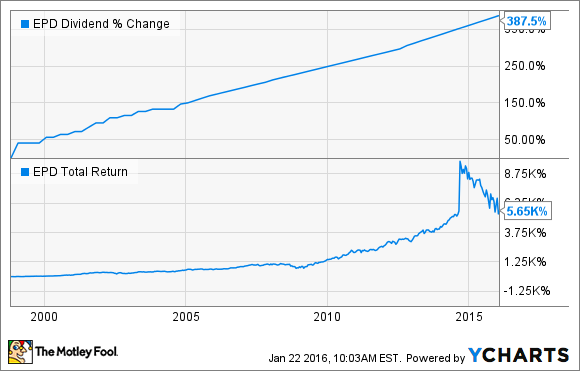 For those investors in their 60s who can look beyond the volatile stock price lately, they will find a great income investment in Enterprise Products Partners.

Steve Symington: I think Nike is a perfect option for investors in their 60s for two big reasons. First, Nike is still enjoying healthy growth despite its juggernaut status in the sportswear and footwear industries. In October, for example, Nike announced a new target to achieve $50 billion in annual revenue by the end of its fiscal year 2020, representing 63% growth from the $30.6 billion in revenue Nike achieved in fiscal 2015.

To be sure, CEO Mark Parker regularly insists during the company's quarterly conference calls that "NIKE is built for growth," as it works to both further penetrate existing core markets like the U.S., while at the same time capitalizing on emerging geographic opportunities like China. Over the longer term, Nike is aiming to sustain single-digit to low double-digit revenue growth, and mid-teens growth in earnings per share, all while continuously expanding returns on invested capital.

Second, Nike has a long history of healthy cash generation and maintaining a healthy balance sheet, which has enabled it to return an incredible $23 billion to shareholders in the form of dividends and repurchases over the past 14 years. Most recently, in November, Nike not only increased its quarterly dividend by 14% (giving it an annual yield of 1.7% as of this writing), it also approved a new four-year, $12 billion share repurchase program. That program will serve to replace Nike's current $8 billion authorization, which is expected to conclude before the end of fiscal 2016.

In the end, I think investors in their 60s -- or any other group of investors, for that matter -- will be hard pressed to find a business with a more attractive balance than Nike between potential stock price appreciation and a proven history of returning capital to shareholders.

George Budwell: I think investors in their 60s need reliability and sustainability to be two key features of any equities in their portfolio. That's why I think pharma giant Pfizer is a particularly good name for older individuals to consider right now.

On the reliability side of the equation, Pfizer's management has proven to be committed to creating shareholder value, while keeping the long view firmly in mind. Despite facing serious threats to its top line from the ongoing patent cliff, for example, Pfizer's stock has performed admirably over the last five years -- mainly because of management's massive investment in share buybacks, as well as ensuring that the company's dividend yield remains in the upper echelons of the healthcare sector.

Since 2010, Pfizer's share buyback efforts have helped to reduce the company's average number of outstanding shares by over 18%, according to data provided by S&P Capital IQ. In turn, this huge share buyback program has shored up the drugmaker's bottom line during an era of eroding sales for former top-selling drugs like Celebrex and Zyvox. 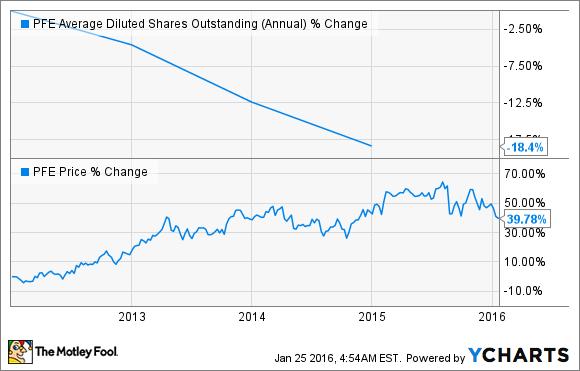 And since buying Wyeth in 2009, Pfizer has now raised its dividend a noteworthy seven times. After its latest 7% hike announced last December, the drugmaker currently sports a yield of almost 4%, giving it one of the highest yields in the entire pharma industry.

Regarding the sustainability of Pfizer's business and, most importantly, its growing free cash flows, the Street thinks the drugmaker can grow its top line by a healthy 8.6% this year, fueled mainly by the strong commercial launch of breast cancer drug Ibrance. While Ibrance has quickly turned into one of Pfizer's star drugs, the company's immense clinical pipeline also speaks volumes about the sustainability of its business moving forward:

All told, I think Pfizer is a compelling buy for investors in their 60s because of management's dedication to shareholder rewards and the drugmaker's exciting mix of new blockbuster products along with its stellar clinical pipeline.