Management's decision to buy back $10 billion in shares helped investors keep down the news that 2016 will likely be another tough one for the oil services provider.

When Schlumberger (SLB -0.51%) reported earnings late last week, it would have not been surprising to see the company produce a weak quarter as  oil prices continue to plunge. There were certainly some aspects of its earnings that left something to be desired, but there were also some other elements that should give investors hope that Schlumberger's management is working in their best interest. Let's take a quick look at the numbers for Schlumberger's most recent quarter as well as the sweet & sour notes it left on investors' palates.

By the numbers
It's a pretty safe assumption that when oil prices decline, the drilling activity and services intensity that Schlumberger makes it hay on will dry up. This quarter was no exception. Revenue for the fourth quarter was $7.7 billion, a decline of 39% from the same quarter last year. Net income for the quarter fell into the red with a net loss of $1.01 billion or ($0.81) per share, but in that net loss was $2.1 billion in asset impairments and restructuring charges related to reducing its workforce. So don't get caught up too much in the headline per share loss because it isn't completely reflexive of the underlying strength in the business.

Looking at the geographic breakdown, we can also see that the trends over the last year have remained rather steady: North America is taking it on the chin particularly hard while other parts of the world such as the Middle East are faring much better. 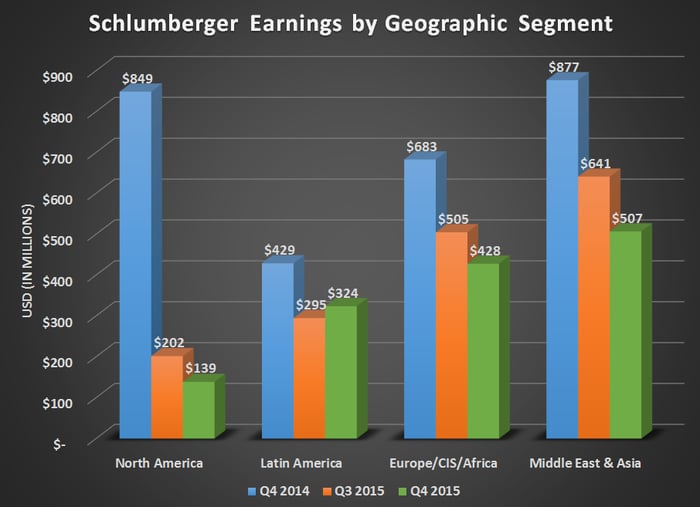 Schlumberger ended the quarter with a pre-tax operating margin of 16.4%. Yeah, that sounds pretty rough compared to last years pre-tax marign of 22%, but let's keep this in perspective. When compared to its peers, Schlumberger's decline to 16.4% margins would be a pretty robust quarter for the others.

The sweet
Despite the earnings numbers that don't look so great, there is one aspect that Schlumberger still does well: Generate cash. As management has been able to wind down its spending levels, the company was able to generate close to $5 billion in free cash flow in all of 2015. Even this past quarter, which was the weakest of the year, free cash flow came in at $800 million.

With the business churning out this much cash on a regular basis, Schlumberger's board approved another $10 billion in stock repurchases after its most recent stock repurchase program was wrapping up. Over the past 5 years, that previous $10 billion repurchase plan helped to reduce share count by more than 7%.

With shares prices down 45% from their highs back in 2014, that $10 billion program will help in keeping share counts down a little after the company completes its acquisition of Cameron International (CAM.DL). The deal will result in an additional 136 million shares of Schlumberger.

The sour
While the company's results have been able to weather the storm rather well, Schlumberger's management still remains rather pessimistic about the market in the coming year. According to CEO Paal Kibsgaard, North America will continue to be the region of greatest weakness:

With the year-end US land rig count 68% lower than the 2014 peak, at less than 700 rigs, the massive over-capacity in the land services market offers no signs of pricing recovery in the short to medium term.

This highlights an impact that will affect oil services providers beyond the initial uptick in oil prices. With so much idle equipment out there, it will take a long time before producers have enough appetite for drilling to put all of this equipment to work. This equipment will be a drab on profitability for quite a while. Of that $2.1 billion in non-cash impairments the company took this past quarter, $1.05 billion of it was related to the impairing the value of its equipment and inventories in North America that aren't likely to be utilized.

What a Fool Believes
The pain of declining oil prices continues to be felt by Schlumberger and others, but the company has done a commendable job of controling its costs to maintain a decent level of proftiability and generate enough cash to keep its shareholder incentives in tact. We're still waiting to see what kind of impact Cameron's results will have on the business, but Schlumberger's ability to maintain its profitability does bode well when the company does come into the fold.

The Motley Fool owns shares of and recommends Halliburton. Try any of our Foolish newsletter services free for 30 days. We Fools may not all hold the same opinions, but we all believe that considering a diverse range of insights makes us better investors. The Motley Fool has a disclosure policy.