As far as biotech goes in 2016, there are probably no safe bets. The upcoming U.S. presidential election could create huge headwinds for the industry, and all sorts of important players are pushing for major reform on drug pricing.

That's why I think if you're going to brave this turbulent environment to buy individual names in biotech right now, you have to be willing to keep the long-view firmly in mind. After all, the closely watched iShares Nasdaq Biotechnology ETF (NASDAQ:IBB) is already off to a horrendous start this year, falling by around 15% in just the first three weeks of the year, according to S&P Capital IQ: 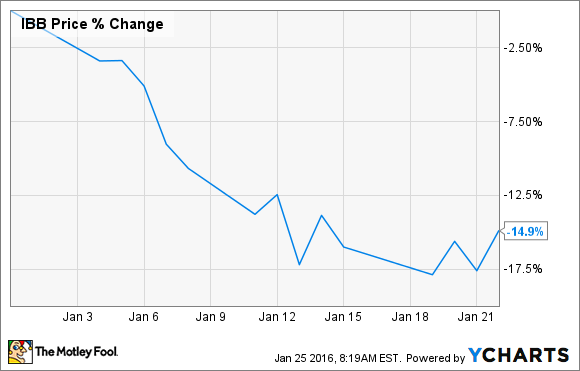 Put simply, I think investors are going to want to double down on quality in 2016 when it comes to biotech, and on that front, there aren't many names higher on the totem pole than Celgene Corp. (NASDAQ:CELG).

Celgene's stumble out of the gate in 2016 should benefit patient shareholders
Although Celgene itself has gotten off to a poor start for the year -- contributing to the weakness in the iShares Nasdaq Biotechnology ETF in the process -- I think this pullback will turn out to be temporary in nature, and investors would be wise to pick up some shares at current levels. Here's why. 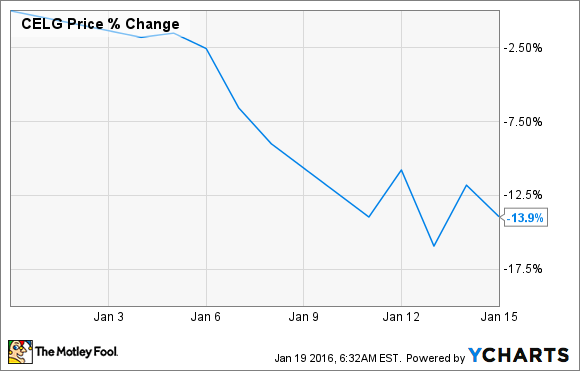 First off, Celgene's fall is partly the result of a weaker-than-expected financial outlook for 2016, provided at the recent J.P Morgan Healthcare Conference. If you've owned Celgene for a while now, though, you're probably well aware that the company always provides conservative guidance -- compared to Wall Street's rosy figures -- to kick off the new year, which it then tends to beat, at least on the lower end.

In 2015, for example, Celgene estimated that total revenue for 2015 would come in at between $9 to $9.5 billion. Per the company's preliminary figures released last week, Celgene's full-year 2015 revenue should end up coming in at around $9.16 billion, giving it a healthy 19.4% growth rate, year over year.

The point is, Celgene's double-digit drop on this news probably isn't warranted, or at least is overdone at this stage. In fact, I think a deeper look at the biotech's core value drivers shows that it offers tremendous value for patient shareholders.

Celgene's three key value drivers
At its heart, Celgene is an immuno-oncology and inflammatory disease specialist. These two areas also just happen to be two of the largest and fastest-growing drug markets in existence. To this end, the biotech has built an impressive core product portfolio consisting of the cancer drugs Revlimid, Abraxane, and Pomalyst, and it recently added the anti-inflammatory drug Otezla to its stable.

These four products are a big reason the company is confidently projecting a CAGR for its total revenue of 19%, and for its adjusted EPS growth of 23% for the period covering 2014 to 2020:

This amazing sales growth of its core product portfolio has given the company a substantial cash cushion of late, helping to build out its second key value driver: its monstrous external clinical pipeline. Celgene has a mind-bogglingly large network of active collaborations across a wide range of disease conditions: 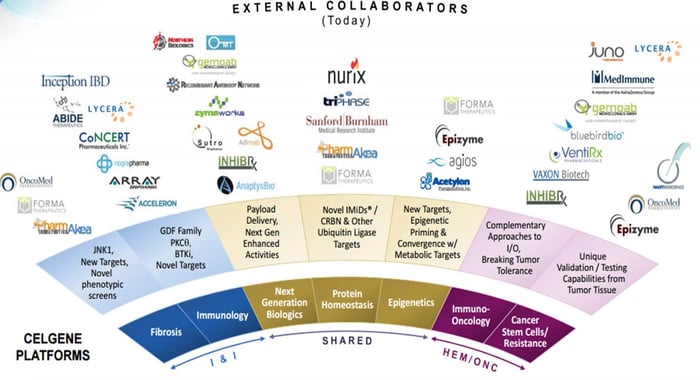 Not surprisingly, though, investors have tended to focus on Celgene's emerging immuno-oncology partnerships with heavyweights in the field, such as AstraZeneca (NASDAQ:AZN) and Juno Therapeutics (NASDAQ:JUNO), especially as they pertain to developing novel (and likely expensive) therapies to treat blood-based malignancies.

After all, Celgene and AstraZeneca teamed up to explore the use of durvalumab -- AstraZeneca's lead immuno-oncology product candidate -- across a host of hematological disorders with multi-billion dollar market sizes, such as non-Hodgkin's lymphoma and multiple myeloma.

Celgene's collaboration with Juno has also grabbed headlines because the two companies are planning on developing several modified T-cell product candidates that could turn out to be a major step forward in terms of how many blood-based malignancies are treated.

The sheer breadth of the biotech's external pipeline shouldn't be overlooked by shareholders. After all, there's no telling how well many of these experimental immuno-oncology therapies being pioneered with AstraZeneca and Juno will ultimately turn out to have intolerable side effects, limiting their commercial potential. Celgene's broad approach to developing a host of therapies with numerous collaborators gives the biotech multiple shots on goal in terms of bringing major new medicines to market.

Celgene's third -- but perhaps most important -- value driver is its $7.2 billion acquisition of Receptos last year, giving the company access to the highly coveted immune-inflammatory drug candidate Ozanimod. Ozanimod is in late-stage testing as a treatment for relapsing multiple sclerosis (RMS), as well as moderate to severe ulcerative colitis (UC). If things go as planned, Celgene thinks Ozanimod could be on the market as a best-in-class treatment for RMS by 2018, and for UC by 2019. According to analysts polled by S&P Capital IQ, these first indications are expected to give the drug megablockbuster potential (>$6 billion in peak sales), and put it on a path to becoming the company's flagship product in the next decade.

Foolish bottom line
Celgene is a great long-term buy because of its stellar product portfolio, robust external pipeline that sports headline-grabbing partnerships with AstraZeneca and Juno Therapeutics, and last year's acquisition of Receptos for what looks like a rock-bottom price. To be honest, there is so much going on within each of these three core value drivers that investors would be wise to dig much deeper to fully appreciate their potential as long-term catalysts for the biotech.

While I've simply tried to hit the high notes, here, the market has seemingly turned a blind eye toward them altogether out of fear. But I think this downturn only creates an opportunity for patient investors willing to wait out the short-term volatility.