What: Shares of Weight Watchers (NASDAQ:WW) soared on Tuesday after Oprah Winfrey, who has a major stake in the company, posted a video disclosing that she lost 26 pounds using the new Weight Watchers program. At 3:30 p.m. ET, the stock was up about 19%.

So what: Back in October, Weight Watchers announced that Winfrey had taken a 10% stake in the struggling company, in addition to joining the board of directors and acting as an advisor. Following that announcement, the stock exploded higher, only to eventually fall back down to earth. Weight Watchers announced a revamped program in December, Beyond the Scale, intended to stop the exodus of members. 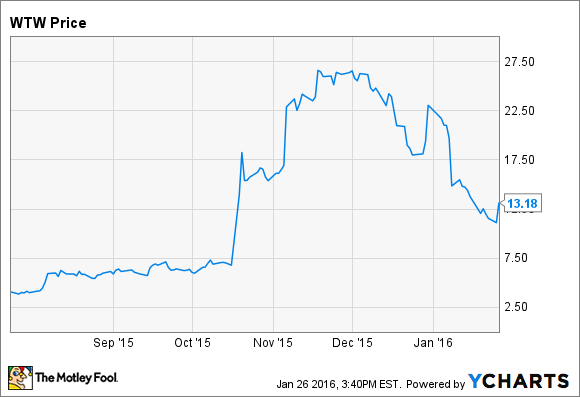 The latest news that Winfrey successfully lost 26 pounds on the new program, all while eating bread every day, according to the media mogul's Twitter video, seems to have renewed investor optimism that Beyond the Scale will have a major impact on Weight Watchers results. During the company's latest quarter, the total number of subscribers declined by a double-digit percentage year over year, continuing a trend that has plagued the company for the past couple of years.

Now what: Ultimately, the new Weight Watchers program will need to produce results and reverse the declining membership for any of the gains in the stock price to be sustainable. As far as celebrity endorsements go, Weight Watchers seems to have hit it out of the park, but only time will tell whether the financial performance of the company will improve.