CN beat analyst estimates for profits and continues to prove its operations are more efficient than any competitor's.

Plunging oil prices have certainly stirred up multiple industries in different ways. The automotive industry, for instance, has indirectly benefited as cheap gasoline has helped fuel sales of much more profitable SUVs and full-size trucks. Cheap oil prices have also been a huge boost to airliners' profitability thanks to plunging fuel prices. Meanwhile, the energy sector has been ransacked with investors running for the hills thanks to cheap oil.

Railroads, though, are somewhat in between. On one hand, railroads do indeed benefit from cheaper fuel costs; on the other hand, fewer carloads filled with commodities such as oil or fracking sands hurt the business. Fortunately, Canadian National Railway (NYSE: CNI) managed to post a more profitable quarter than expected thanks to lower operating expenses. Let's take a look at some of the highlights.

Q4 highlights
CN's carloadings declined 8% during the fourth quarter, which drove revenues 1% lower year over year to 3.16 billion Canadian dollars. A closer look reveals fourth-quarter revenues from automotive, forest products, and intermodal increased by 13%, 12%, and 5%, respectively, compared to the prior year. On the flip side, revenues declined for metals and materials by 21%, coal by 16%, and petroleum and chemicals by 4%.

CN's decrease in revenues was mostly attributable to reduced shipments of energy-related commodities because of the reduced activity within the oil and gas industry, and continued weak demand for coal.

Despite the decline in revenue thanks to weakness in commodities, CN managed to post a 7% increase in operating income to CA$1.35 billion and a 11% increase in net income to CA$941 million during the fourth quarter, compared to last year. Even better yet, CN's earnings per share increased 15% to CA$1.18 -- ahead of analysts' expectations of CA$1.11 per share, according to Thomson Reuters.

While revenues were hindered by shipping weakness in the oil industry thanks to lower prices, those lower prices were a large benefit to CN's fuel costs -- accounting for nearly all of the 7% decline in total operating expenses.

In addition to lower fuel costs, one of the biggest takeaways for investors is that CN remains an industry leader in running its operations incredibly efficiently. 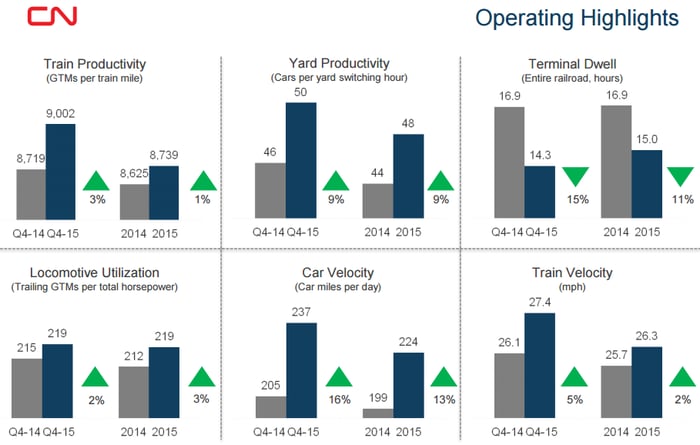 All of those factors culminated in an extremely strong operating ratio -- a very important measure of railroad efficiency that compares expenses to revenue -- which dropped a favorable 350 basis points to 57.2% during the fourth quarter. Furthermore, that helped drive CN's full-year operating ratio down to 58.2%, which was a 370-basis-point improvement over 2014's operating ratio of 61.9%.

Cherry on top
CN of course held to its historic tradition of returning value to shareholders by announcing a 20% dividend hike to CA$0.375 per share. If you're keeping track, that means CN has declared annual dividend increases 20 consecutive times, averaging a 17% increase per year, dating all the way back to its IPO in 1995. CEO Claude Mongeau said, "We are pleased to uphold our track record of consistently returning cash to shareholders. This dividend increase is testimony to our confidence in the strong cash flow generation capacity of CN throughout business cycles, and reaffirms our objective of gradually increasing the dividend payout ratio toward 35 per cent."

Going forward, despite the challenging economic environment for many commodities, CN will continue to deliver mid-single-digit earnings-per-share growth and continue investing for the long term with a 2016 capital investment program of roughly CA$2.9 billion. All in all, CN remains an intriguing railroad investment option as the company's margins remain the envy of the industry, and that won't change anytime soon.

Daniel Miller has no position in any stocks mentioned. The Motley Fool owns shares of and recommends Canadian National Railway. Try any of our Foolish newsletter services free for 30 days. We Fools may not all hold the same opinions, but we all believe that considering a diverse range of insights makes us better investors. The Motley Fool has a disclosure policy.