Despite a great fourth-quarter and full-year financial performance, the market isn't buying Ford. What will it take?

We knew Ford Motor Company (F -5.71%) was going to report an excellent fourth-quarter to put the finishing touches on what was a strong year, despite its strong full-year performance not being reflected in its stock price – though, that was more to do with peak auto industry sales worries and global economic concerns than it was to do with Ford's performance.

There was hardly anything negative to comment on during Ford's fourth-quarter, save for maybe operations in South America dealing with tough market conditions. With that said, let's dig into the highlights.

Q4 and full-year highlights
Investors know it's a good quarter when an entire page of the press release can be devoted to the company's financial highlights. Here are some of the more impressive ones Ford and its team achieved during the fourth-quarter and full-year.

Another highlight from Ford's strong 2015 performance can be found from its global operating margin. (Also, keep in mind these pre-tax figures don't match the record figures because Ford Credit is not included in the automotive sector results shown below). 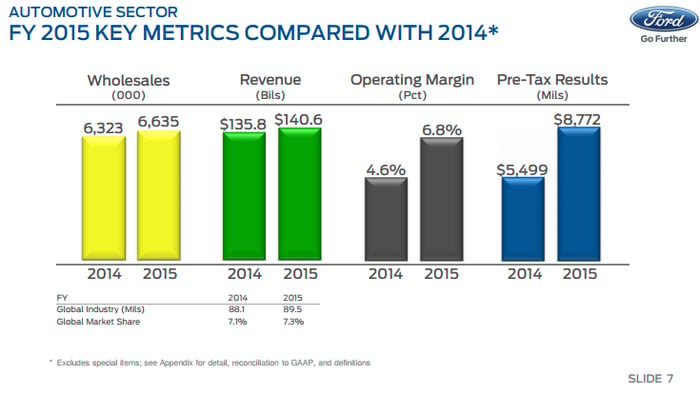 While the increase in wholesales speaks more to the decline suffered last year due to the slow ramp of F-150 production, and the revenue was strong in 2015, but the jump in pre-tax profits was largely due to the 220 basis point bounce in operating margin – a great sign for investors. A good chunk of that strong margin performance was, of course, driven by North America where the fourth-quarter generated 8.2% operating margin and the full year operating margin was 10.2%.

Lastly, while investors knew Ford was going to post a solid fourth-quarter, I previously wrote for it to be a great fourth-quarter there would have to be some pleasant surprises from Europe and Asia Pacific, the latter being mainly driven by Ford's operations in China. Fortunately, those two markets performed very well last quarter.

Also overseas, looking at the graph below you can see which factors helped drive Ford's results in Europe higher. 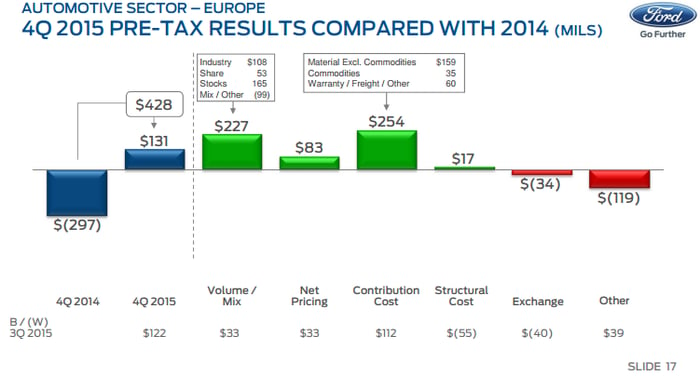 It's no secret that smaller cars sell better in Europe than larger SUVs. Despite that truth, Ford's SUV sales increased 31% in Europe during 2015 and that helped drive a favorable volume/mix as well as pricing. That combined with lower commodity pricing and material costs helped Europe improve its fourth-quarter results by a large $428 million. It should also be noted that the accounting change in Ford's pension plan positively affected results, though it's unclear by how much, but that management also believes it's a more fair comparison to its competitors now.

What's it going to take?
Ultimately, Ford's fourth-quarter was a solid performance with record pre-tax profits, increasing margins, increasing global market share and, best of all, a strong result from Ford's two most important markets outside of the U.S.: Europe and China. The annoying part about this entire development for investors is after the results were released Ford's stock price declined 3%, before slightly recovering by the time of this writing. Despite the market acknowledging it was a strong performance from Ford and its team, the market is reluctant to buy into Ford. Sadly, perhaps the only thing that will convince investors Ford and other automakers can be a legitimate long-term buy is a scenario when the U.S. auto sales begin to decline and the company proves it can still be a big winner. That's really all Ford has left to prove, after delivering big in every other way since the great recession.