In a stock market that's been shaky from the outset this year, what's boring might be interesting as we move further into 2016.

So what: Each company is a constituent of the S&P Consumer Staples Index, a subset of the S&P 500 Index. That is to say, each is a large-capitalization company with storied brands, selling everyday consumer items at global scale. Often forgotten by investors seeking growth, stocks with similar characteristics to these three multinationals seem to come into vogue when fear creeps into the markets, as it did increasingly as 2015 progressed: 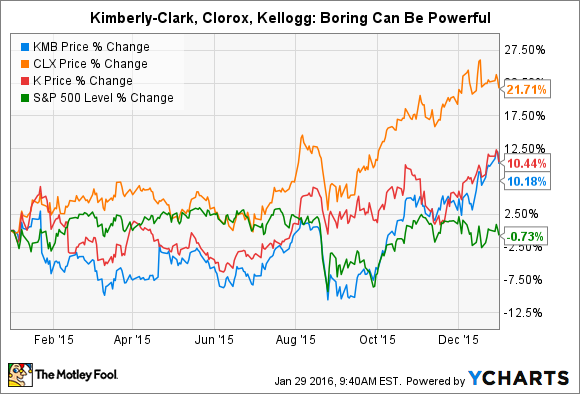 Take Clorox, for example. The company grew revenue at a rate of only 3% last quarter. But it sports a beta of 0.50, meaning that it's only one-half as volatile as the broader market. And Clorox pays a rich dividend of nearly 2.5% -- factoring this in, the company provided a total return to shareholders last year of more than 25%. Compare this to the overall market's total return, as represented by the S&P 500 Total Return Index's gain of just 1.4% during 2015.

Clorox is attractive to investors at the moment because it sells manufactured items such as its namesake bleach, or Glad brand trash bags for example, at volume levels which don't fluctuate markedly from quarter to quarter. The potential rewards of investing in a disruptive business from say, the healthcare or technology industries, may not be present in a Clorox stock position, yet in compensation, investors believe that downside price risk is substantially reduced.

This isn't to imply that globalized-consumer staples companies seemingly entrenched in their market share aren't capable of innovation and somewhat faster growth. For Clorox and its peers, however, innovation is often incremental and entails changes in product formulation or packaging.

For example, in a recent earnings call with analysts, Clorox CEO Benno Dorer cited new ranch salad dressing flavors within the organization's food business as an important innovation currently aiding sales of a significant customer, Wal-Mart. This is a prime example of graduated product improvement -- boring, perhaps, but as the chart above demonstrates, in the current market, boring can be quite powerful.

Strategies for muted revenue expansion
As with other multinationals, U.S. dollar strength has recently dampened the performance of mammoth consumer-oriented conglomerates. To illustrate, Kimberly-Clark's top line revenue was subject to significant currency depreciation in 2015, and thus declined 5.7% for the year. But the company managed organic revenue growth of 5% during the period, on the strength of marketing investments in its brands.

Because of their tendency toward incremental top-line growth, and especially during this period of greenback strength, consumer-goods conglomerates have zeroed in on continual productivity improvement and cost reduction as a way to boost earnings per share. And because of a perception that economies worldwide may be slowing, investors have recently placed a premium on this type of operational discipline.

Kimberly-Clark uses an annual framework called "FORCE," or "Focused on Reducing Costs Everywhere," to methodically wring efficiencies out of its system. During 2015, the company achieved FORCE savings of $365 million. This is roughly equal to 2% of the organization's $18.6 billion in annual sales, and helped propel an operating margin improvement of 120 basis points for the year.

Kellogg's savings strategy is quite similar to Kimberly-Clark's. In the first three reported quarters of 2015, Kellogg's revenue trailed the prior year by 6.2%. Yet even with a projected revenue increase of only 1%-3% next year, Kellogg's management team is confident that it can increase operating profit by 4%-6% on a currency-neutral basis.

It will do so partly through Kellogg's own cost and efficiency initiative, a four-year project that was launched in late 2013. Reminiscent of one of the company's cereals, the initiative is known as "Project K." Kellogg expects to take total cumulative before-tax charges against its income statements of approximately $1.2 billion to $1.4 billion during the life of Project K. But the effort should result in tangible improvements in operating margin, and consequently, future earnings per share.

Now what: Many of us have undoubtedly been taken by surprise by the depth of equity selling which has characterized this first trading month of 2016. Continuing a trend from last year, however, you can see that some market participants believe the annuity-like income stream from recurring sales of household goods creates a safe haven for their capital: 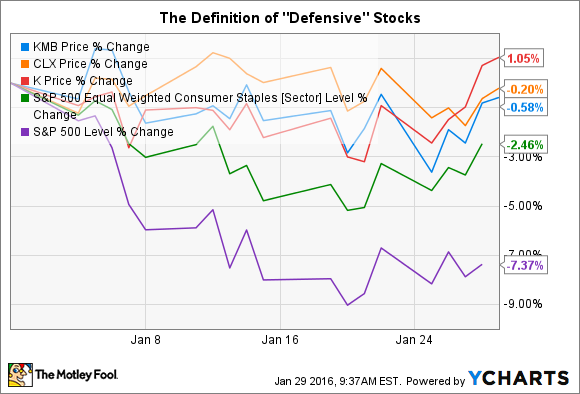 Of course, the market is in one of those liminal stages where it could continue to retrace, or resume its former ascent soon. It's very possible that the S&P 500 could rekindle the positive price trend which has been prevalent for most of the past six years, should corporate earnings hold up and uncertainty over the global economy settle down a bit. But if the broader indices remain flat or decline this year, these three stocks are likely to find their way into many a prudent investor's portfolio.

Asit Sharma has no position in any stocks mentioned. The Motley Fool recommends Kimberly-Clark. Try any of our Foolish newsletter services free for 30 days. We Fools may not all hold the same opinions, but we all believe that considering a diverse range of insights makes us better investors. The Motley Fool has a disclosure policy.