Exelixis' fundamental thesis gets a lift in January, but that doesn't matter to skittish investors. 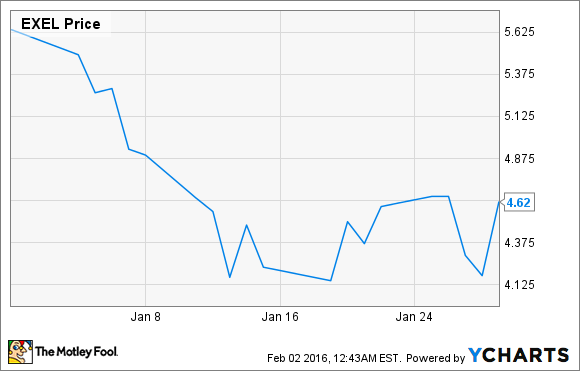 What: Shares of Exelixis (EXEL -0.72%), a small-cap biotech company focused on developing novel therapies for the treatment of cancer, tumbled 18% in January, based on data from S&P Capital IQ, largely due to market weakness and the skittishness associated with emotional investors.

So what: The Nasdaq Biotechnology Index actually suffered through its third-worst month ever in January, so it's not surprising to see shares of Exelixis lost value. When the broader market heads lower, investors tend to move their money out of higher growth/ riskier investments. Exelixis is a company that offers ample growth prospects with Cometriq and Cotellic, but it's also losing money, with its cash burn being a potential liability if the stock market continues to fall.

Adding to the concerns has been the strong performance of Bristol-Myers Squibb's (BMY -0.53%) cancer immunotherapy Opdivo, which competes in the same space as Cometriq. Bristol's Opdivo had its label expanded in November by the Food and Drug Administration for the treatment of second-line renal cell carcinoma. Considering Opdivo's high response rates, it's possible that even if the FDA approved Cometriq as a second-line RCC treatment, Opdivo wouldn't relinquish market share.

Now what: It may not have been the best month for Exelixis, but the long-term thesis for owning the company remains well intact. Mind you, this is coming from someone who currently owns shares of Exelixis, so keep that bias in mind.

In early January, we received a more encompassing update from the METEOR trial that examined Cometriq in second-line RCC. Previously reported data of the first 375 patients to hit the primary analysis showed a median progression-free survival of 7.4 months compared to 3.8 months for the Afinitor arm, as well as a 42% rate of reduction in terms of disease progression or death compared to Afinitor. A more in-depth analysis was released of all 658 patients, which showed a statistically significant improvement in PFS of 7.4 months versus 3.9 months in the Afinitor arm and an even more impressive 48% reduction in the rate of disease progression or death relative to Afinitor. On Feb. 1, Exelixis also announced improved overall survival relative to Afinitor as well.

Marketing authorization applications have been filed in the U.S. and Europe for Cometriq, with the FDA granting Cometriq a priority review. The company's PDUFA action date is therefore moved forward a bit to June 22, 2016.

Even if Exelixis only manages to secure 10% of the second-line RCC market share, that could be huge. Combine this with expansion opportunities in liver cancer, as well as growth opportunities for Cotellic in combination with Roche's Zelboraf, as well as with Roche's immunotherapy atezolizumab for solid tumors, and there's plenty of reason to believe Exelixis' valuation could jump dramatically in the coming years.