Bellicum Pharmaceuticals and Geron Corp. are intriguing speculative buys after getting trounced in January.

January was anything but kind to biotech stocks. According to S&P Capital IQ, nearly a quarter of all publicly traded biotechs lost more than 30% of their value last month.

This trend was especially pronounced among clinical-stage companies, where the market seemingly lost its appetite for risk altogether in January. While developmental-stage entities never come with a guaranteed return on your investment, they can generate jaw-dropping gains in short periods of time, implying that this steep sell-off may have created some compelling buying opportunities for risk-tolerant investors.

Among this sea of red, I personally think that best of these beaten-down biotech stocks are Bellicum Pharmaceuticals (BLCM 0.00%) and Geron Corp. (GERN -7.59%). Here's why.

Bellicum is an under-the-radar name in the high profile immuno-oncology space
Despite Bellicum making steady progress with its lead clinical candidate, BPX-501, for a host of rare blood disorders and hematological malignancies, the company's stock has failed to capture Wall Street's imagination. 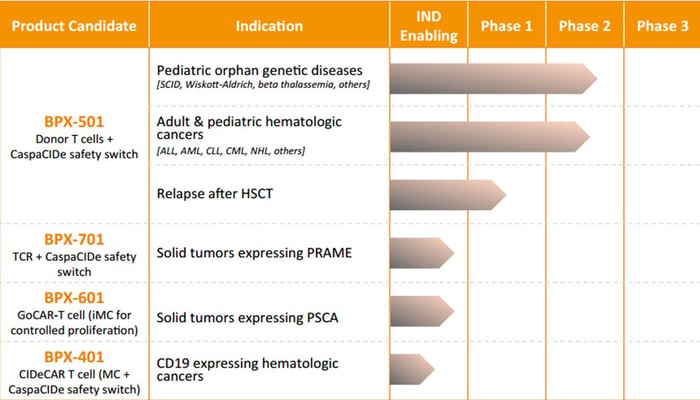 In January, for instance, the biotech's stock lost a whopping 40% of its value: 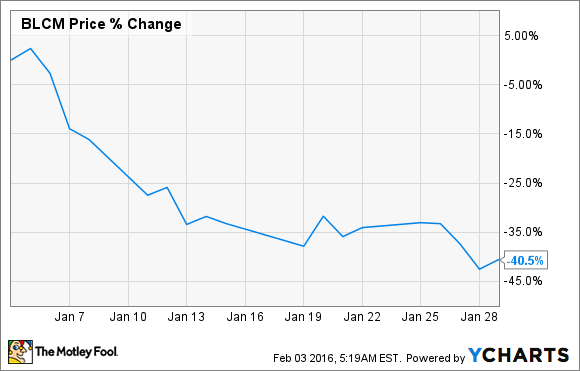 Bellicum nevertheless remains an intriguing play in the immuno-oncology space because of its molecular switching platform designed to make modified T-cell therapies safer and more effective.

For those new to this story, novel cellular therapies like chimeric antigen receptor (CAR) T cells are proving to be highly potent treatments for some hematological malignancies. However, they have also been plagued by serious safety concerns such as cytokine release syndrome.

Bellicum hopes to solve this problem using its molecular switch platform. The basic idea is to enable clinicians to "turn off" these modified T-cells in case a patient reacts adversely to the treatment.

Although some of the biotech's chief rivals are working on somewhat similar technologies (at least in principle), Bellicum's approach looks like a strong candidate to become a best-in-class platform based on the clinical data released so far. That means the company should be able to carve out a profitable niche in this red-hot area of immuno-oncology -- regardless of whether it end ups being the first or last to market.

Geron's experimental blood cancer drug has blockbuster potential
Geron's story is long, complicated, and full of disappointment for investors. However, the tiny biotech's investing thesis radically changed when CEO John Scarlett restructured the company to focus exclusively on the development of the telomerase-inhibitor imetelstat as a treatment for blood-based disorders such as myelofibrosis, myelodysplastic syndrome, and essential thrombocythemia.

Scarlett is known in the biotech industry for striking favorable buyout deals for his former companies. In 2009, for instance, Scarlett helped engineer an $850 million buyout of Proteolix while carfilzomib (Kyprolis) was still in midstage testing. Since then, Kyprolis has gone on to become an important growth driver at Amgen.

After inking a development deal for imetelstat with Johnson & Johnson's (JNJ 0.34%) subsidiary Janssen Biotech and dramatically slashing the company's workforce by 46% in 2015, Scarlett seems intent on selling Geron as well. Adding fuel to the fire, J&J itself sports a lengthy track record of acquiring promising experimental cancer treatments from clinical-stage companies.

Looking ahead, Geron's fate appears to depend on imetelstat's studies for myelodysplastic syndrome and myelofibrosis. If the drug doesn't get derailed in these studies by its known safety and tolerability issues, Geron could either sell itself or use the money from imetelstat's milestone payments from J&J to reconstitute its clinical pipeline.

The downside risk -- and it's significant -- is that imetelstat flames out in one or more of its ongoing clinical studies. After all, Geron does seem to be structured for a quick sale if imetelstat hits pay dirt, meaning that the biotech has little to fall back on if the things don't go as planned.

Are Bellicum and Geron compelling buys right now?
There's no doubt that both of these stocks are on the spicy side of things. Even so, Bellicum is working in a field that has been largely validated on the efficacy end of the spectrum, but there's a clear need to improve the safety of CAR Ts. Given Bellicum's emphasis on safety, the biotech appears like a compelling way to gain exposure to this novel approach to treating cancer.

Geron, for its part, is probably even riskier than Bellicum. While J&J has already identified imetelstat as one of its potential blockbuster candidates, there's no sure thing when it comes to experimental-stage cancer drugs. Having said that, Geron's current CEO and J&J have both shown themselves to have a keen eye for spotting important new cancer treatments early in their development. Risk-tolerant investors might want to consider opening a position in this all-or-nothing biotech.

George Budwell has no position in any stocks mentioned. The Motley Fool recommends Johnson & Johnson. Try any of our Foolish newsletter services free for 30 days. We Fools may not all hold the same opinions, but we all believe that considering a diverse range of insights makes us better investors. The Motley Fool has a disclosure policy.