Please ensure Javascript is enabled for purposes of website accessibility
Log In Help Join The Motley Fool
Free Article Join Over 1 Million Premium Members And Get More In-Depth Stock Guidance and Research
By Jeremy Bowman - Feb 6, 2016 at 11:01AM

2016 hasn't been any kinder to the DIY soda-maker.

What: Shares of SodaStream International (SODA) slipped 15% last month as the company continued to struggle to rebrand itself and grow again. As the chart below shows, the bulk of the sell-off came in a brief three-day period early in the month. 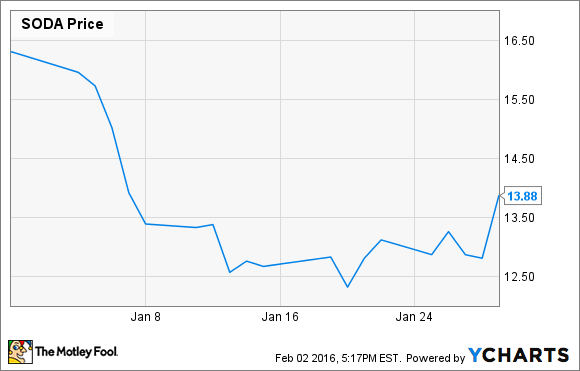 So what: SodaStream had been battered over the last two years, and the recent sell-off seemed to carry over into the beginning of the year. There was no major news pushing the stock down, but it seemed to be a natural reaction to a run-up in the prior month as rival Keurig Green Mountain was taken private in December.

In the beginning of the month, Susquehanna downgraded SodaStream to neutral and lowered its price target from $27 to $16. The move echoed Wall Street's increasingly negative view on the stock; nearly 20% of the stock is sold short.

SodaStream has been in the process of rebranding itself from a soda brand to a sparkling water one, but thus far, the company has struggled to gain traction with the rebranding effort. Sales of starter kits and flavor packs have fallen, though CO2 sales continue to rise.

Now what: Analysts expect 2015 revenue to decline 19%, and the outlook doesn't look much better for the current year as EPS is expected to fall from $0.96 to $0.90.  However, some catalysts working in its favor include new machine launches in 2016, such as the Mix and Ultimate. Mix could find an audience with at-home bartenders and mixologists as the device can carbonate any kind of liquid, including alcohol, while the Ultimate will be able to dispense both hot and cold beverages similar to the Keurig Kold.

A buyout remains a possibility, as SodaStream has already formed a partnership with PepsiCo and earlier rumors swirled around a deal with Starbucks.  Without an acquisition bailing out the stock, however, 2016 is likely to be another tough year. At this point, shares seem to be at a bottom, but without sustained sales and profit growth, the stock can easily go lower.