Please ensure Javascript is enabled for purposes of website accessibility
Log In Help Join The Motley Fool
Free Article Join Over 1 Million Premium Members And Get More In-Depth Stock Guidance and Research
By Daniel Miller – Feb 8, 2016 at 8:28AM

Here are three stocks making big moves thanks to earnings and other news. 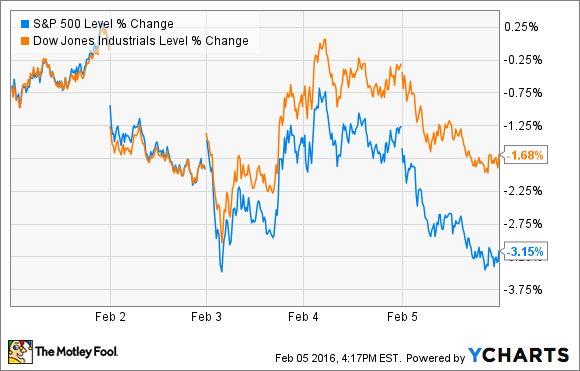 On one hand, the nation's trade deficit rose 2.7% in December, as exports fell because a weak global economy mixed with a strong dollar makes American-made goods and services more expensive. It was the first year since 2009 that U.S. exports declined. On the other hand, the unemployment rate fell to 4.9% last month, and while nonfarm payrolls increased less than expected at a seasonally adjusted 151,000 in January, investors should keep in mind that the past three months average 231,000.

The mixed bag of economic data leaves the Fed's near-term interest-rate decisions largely up in the air, and that means more volatility for stocks as more economic data is released in the near term. In other news, there were some stocks making major moves this week. 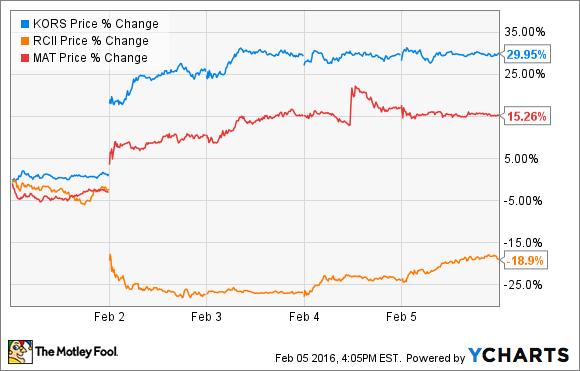 In an interesting twist of events this week that could bring the DC and Marvel universes to the same side, Bloomberg announced that Mattel (MAT 1.01%) and Hasbro, two of the largest toy companies on the planet, have discussed the possibility of merging.

Though Mattel and Hasbro have so far declined to comment on the matter, Bloomberg reports that Hasbro approached Mattel regarding a potential transaction late in 2015. The talks may not result in a deal, but that potential development, in addition to Mattel's posting a better-than-expected fourth quarter, was enough to send the stock price soaring this week.

Excluding one-time items, Mattel's profit during the quarter was $0.63 per share, which was a couple of pennies above the consensus estimates polled by Bloomberg. For investors, it signaled that progress was being made in its turnaround efforts for its lineup of struggling toy brands -- including its highly important Barbie business.

Shares of Michael Kors Holdings Limited (CPRI -1.94%) soared almost 24% on Tuesday alone, after crushing views for the quarter. Starting from the top, Michael Kors' revenue moved 6.3% higher to $1.40 billionm which was ahead of analysts' estimates, polled by Bloomberg, of $1.36 billion. Kors' earnings also climbed to $1.59 per share in the fiscal third quarter, which was ahead of analysts' estimates of $1.46 per share.

The revenue and earnings beat was attributed to stronger e-commerce sales, a new lineup of accessories, and footwear. Further, Kors' move to sell smaller and less expensive cross-body bags appears to be helping the company defy what was a slower holiday sales for many retailers.

It was a strong enough quarter that investors even brushed off the company's guidance for the fiscal fourth quarter, which was a little weaker than analysts had anticipated. Kors predicts its earnings to check in between $0.93 to $0.97 per share, slightly lower than analysts' estimates of $1, and its revenue to check in at $1.15 billion, just slightly below analysts' estimates of $1.16 billion.

While Michael Kors had a great week, Rent-A-Center (RCII -21.59%) stock performed just about the opposite, as its share price plunged after an unusual and mixed financial performance during its fourth quarter. The company's top-line revenue edged 0.3% lower, compared with the prior year's quarter, to $793.8 million -- below analyst estimates of $807 million.

Rent-A-Center's profit in the fourth quarter was unusual because of a large $1.17 billion goodwill impairment charge. Thanks to that huge charge the company's earnings swung to a loss, but excluding the charge, the company's adjusted earnings were $0.54 per share, which was an increase from the prior year's $0.51 and also above analysts polled by Thomson Reuters, which expected $0.52.

With a mixed bag of financial results and a huge goodwill impairment charge, investors weren't thrilled with the company's forward guidance. Rent-A-Center noted that it expects core U.S. revenue to drop 4% to 6% during fiscal 2016.

"Our results are not where we want them to be; however, the Rent-A-Center team has made significant progress on a number of fronts. We are now two years into our multi-year transformation, and we are making the necessary changes to improve our profitability to drive the long-term success of Rent-A-Center." said Robert D. Davis, Rent-A-Center's CEO.

Daniel Miller has no position in any stocks mentioned. The Motley Fool owns shares of Michael Kors Holdings. Try any of our Foolish newsletter services free for 30 days. We Fools may not all hold the same opinions, but we all believe that considering a diverse range of insights makes us better investors. The Motley Fool has a disclosure policy.