Please ensure Javascript is enabled for purposes of website accessibility
Log In Help Join The Motley Fool
Free Article Join Over 1 Million Premium Members And Get More In-Depth Stock Guidance and Research
By Adam Levine-Weinberg - Feb 8, 2016 at 11:30AM

Investors are worried about economic slowdowns in developing countries.

Investors were rattled by the sharp sell-off in the Chinese stock market during January. Boeing's (BA 1.26%) decision to cut production of its 747 and 777 models didn't help to reassure investors about airplane demand. The result was a mass exodus from aircraft leasing stocks. 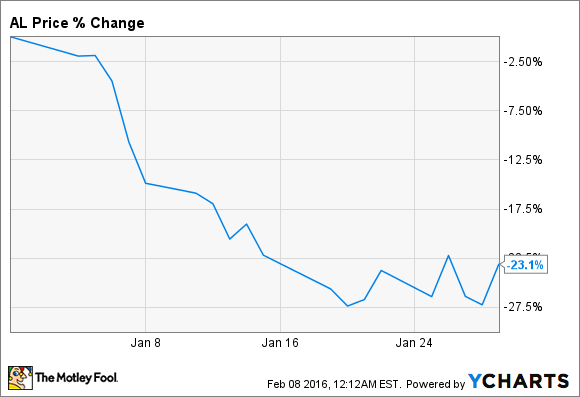 So what: China has been a key driver of air travel growth in recent years. Yet economic growth is slowing in China, which was highlighted by a 23% plunge in the Shanghai Composite Index during January. This naturally raises the question of whether the air travel sector there will also face a downturn.

Not surprisingly, China is a major market for aircraft leasing companies like Air Lease. In 2014, Air Lease got 22.1% of its revenue from China, up from 15.5% a year earlier.

Boeing's production cuts also potentially bode ill for aircraft leasing firms. While Boeing and Airbus are suppliers to aircraft leasing companies, they are also competitors in a sense. Airlines can either buy directly from the manufacturer or lease a similar plane from an aircraft leasing company. If Boeing is having trouble selling all of its airplanes, it could be a sign of future pricing pressure for Air Lease.

Now what: Weak economic conditions in many emerging markets could negatively impact Air Lease and its peers by driving down lease rates and aircraft resale values. Nevertheless, the January sell-off in aircraft leasing stocks appears to be a tempest in a teapot.

Air Lease doesn't have many leases expiring in the next few years, and it tends to complete lease placements several years in advance, providing a substantial buffer against short-term dips in aircraft demand.

Furthermore, Boeing's production cuts aren't as ominous as they seem. While they do indicate low demand for the 747 and 777 models specifically, cutting production will help balance the market, which is good for aircraft leasing companies.

Air Lease investors are right to fear the possibility of a big "aircraft bubble." If overproduction led to a severe drop in airplane residual values, it could spark huge asset write-downs for aircraft leasing firms. However, this risk seems to be overstated. If global markets settle down, Air Lease stock could bounce back.