Please ensure Javascript is enabled for purposes of website accessibility
Log In Help Join The Motley Fool
Free Article Join Over 1 Million Premium Members And Get More In-Depth Stock Guidance and Research
By Daniel Miller - Feb 10, 2016 at 11:02AM

While its 3% sales decline was worse than the industry's 0.4% average, Ford's transaction prices were a thing of beauty.

When Ford Motor Company's (F 0.86%) sales release headline touts van sales, you know it was a lackluster month. And it's fair to say Ford's January was lackluster, with its total sales declining 3% to 173,723 units. That year-over-year decline contrasted with Fiat Chrysler Automobiles' 7% gain, and it even trailed GM's meager 0.5% increase.

However, not all the figures from Ford's January in the U.S. market were bad. Let's take a look at what weighed the results down, and at a couple of positive statistics from Detroit's second-largest automaker.

Car sales plunge
For those looking to place blame for Ford's sales decline last month, the easy target is its car segment. Of the seven vehicles in the segment, five posted double-digit declines compared to January 2015, and the Fiesta and Focus posted significant declines of 25.9% and 29.8%, respectively.

The increase in sales of Ford's SUVs provides a nice segue into the next good statistic from January: prices.

Ford's overall transaction prices were up a staggering $1,800 in January, which is nearly three times the industry average. That was obviously driven in part by fewer cars selling, more SUVs selling, and, of course, the F-Series. In fact, F-Series average transaction prices increased $2,500 during January at a time when incentives declined $500. That is a phenomenal way to generate more profits at higher margins. The only downside was that F-Series sales declined by 5% to 51,540. That decline isn't something investors want to see; however, it should be taken with a grain of salt. Remember that December was the first time in more than a decade that F-Series sales topped 80,000. It's likely that December pulled some sales from January thanks to the holiday season, and January sales historically show a big drop-off from December, as you can see in the graph below. 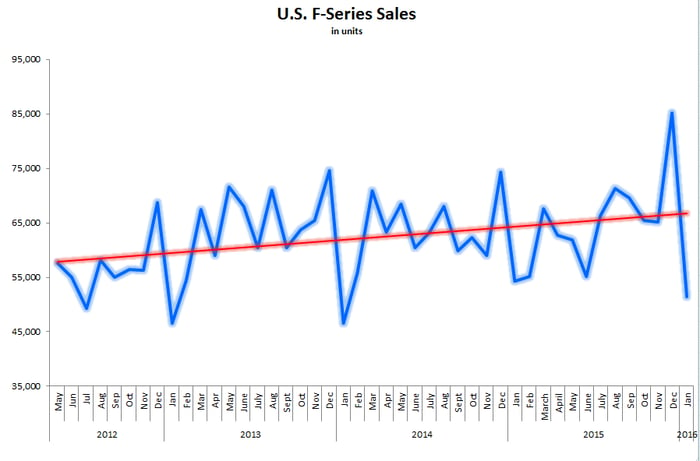 Also, remember that Ford considers any month with more than 50,000 F-Series sales a good month; it's just that investors have been spoiled by the truck's recent sales performances after production of the aluminum-bodied F-150 reached full capacity.

Out of the struggle zone?
The Lincoln brand looks poised to build on its recent sales success. After declining to a 32-year sales low in 2013, the brand finished 2015 on a good note: It was the first year since 2008 that Lincoln's sales topped 100,000 vehicles. Furthermore, 2014 and 2015 were its first two years of consecutive sales gains since 1998. Last month, Lincoln sales were up 8% year over year to 7,177 units, which was the brand's best January since 2008. A significant portion of the sales gains was attributable to the all-new MKX, which posted a 51% increase in sales; that also drove Lincoln's SUVs to their best sales performance since 2001.

While Lincoln's recent improvements are a good sign -- especially since it's becoming critical for global automakers to have successful luxury lineups to drive better overall margins -- the brand still has a long way to go. Ford's committed $5 billion to refreshing models, developing new models, and boosting its dealership count in China.

In 2016, Lincoln intends to open about one dealership every 10 days in China, an expansion that will be vital to the brand's revival and its ability to achieve its 300,000 annual sales goal by 2020. Hopefully, by that year, investors will be able to look back and pinpoint this last 24-month stretch as the beginning of a much brighter and profitable Lincoln story.

Fleet sales are a downer
Last, but not least, is arguably the biggest downer within Ford's January sales data. Ford's total sales were down 3%, but it's a little more disappointing when you consider that its retail sales, those to individual consumers, fell by 11% last month compared to the prior year. On the flip side, Ford's fleet sales increased by 20% in January. Now, not all fleet sales have very small margins, as some would have you believe. Unfortunately, typically the worst fleet sales are those to car-rental companies, which were largely responsible for Ford's 20% gain in fleet sales in January.

Now, it should be noted that taking one month out of context for fleet sales isn't a smart idea because those large orders have random timing implications. It could be the exact opposite next month, with very few sales to car-rental companies, and quite a large order for commercial or government customers. However, the big takeaway is that even with a 20% boost from fleet sales, Ford's overall sales were still down 3% total thanks to the large decline of sales to retail customers -- and there's just not a great way to spin that, currently. Investors should definitely wait to sound any panic alarms in regard to sales during the first quarter, but should hope for a rebound in February.