Please ensure Javascript is enabled for purposes of website accessibility
Log In Help Join The Motley Fool
Free Article Join Over 1 Million Premium Members And Get More In-Depth Stock Guidance and Research
By Matthew DiLallo – Feb 11, 2016 at 10:29AM

The refiner is coming off a strong 2015, but could keep soaring if these catalysts come through.

Valero Energy (VLO -0.36%) had a banner year in 2015, surging 40% largely due to its ability to capture strong refining margins. 2016, however, has been a different story, with the company joining the broader market stumbling out of the gate with its stock down 20% since the start of the year. That slump is primarily due to concerns that the global economy is slowing down and taking gasoline demand with it. That said, if those concerns prove to be unfounded, it could cause the stock to rebound. That's one of three catalysts on the horizon that could fuel a rally in Valero's stock.

1. Gasoline demand is higher than expected
Last year was the best year for gasoline consumption in the U.S. since 2007, with demand increasing by 2.6%, according to the U.S. Energy Information Administration. Driving this increase was improved employment as well as cheaper gas prices, which combined to fuel a 3.7% increase in total highway miles traveled. That said, despite even lower gas prices in early 2016, consumers are expected to tap the brakes on gasoline demand growth, which is only expected to increase by 0.8% in the year ahead and just be flat in 2017.

These projections, however, are fluid numbers and are currently based on expected employment growth against improvements in vehicle fleet fuel economy. If, however, employment growth in the U.S. is stronger than expected, it could drive increased demand for gasoline. Furthermore, lower gas prices drove strong demand for trucks and SUVs last year, with sales up 15% compared to the prior year at the three large U.S. automakers. If more consumers than expected trade in fuel-sipping cars for gas-guzzling trucks and SUVs, it could fuel stronger-than-expected demand for gasoline. That would keep Valero's refining margins strong, which would drive higher profits and likely fuel a rebound in Valero's stock price.

2. It makes an accretive acquisition
While Valero is already the largest independent U.S. refiner as measured by throughput capacity, it's open to expanding that capacity for the first time in years. At least that was what Valero CEO Joe Gorder hinted at late last year when he told analysts at a conference that "we think there are acquisition opportunities going forward." That's a pretty significant change in philosophy because Gorder had said in the past that the company wanted to focus on growing its existing assets instead of buying other refineries.

Refining assets don't change hands very often, with PBF Energy (PBF 2.03%) being the only really active acquirer of refinery assets over the past few years: 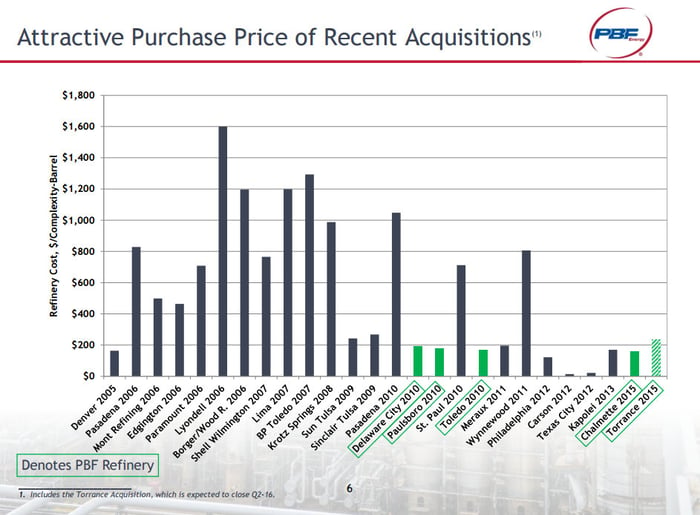 That said, cash-strapped oil companies could be looking to cash out of refining assets to bolster their balance sheets, which could open the door for Valero to buy assets. Furthermore, the deals that have been consummated lately were made at valuation multiples that are low by historical standards. That suggests that conditions are ripe for Valero to make a highly accretive transaction that would provide a nice boost to earnings. In fact, that's exactly what PBF Energy was able to do with its recent acquisitions. PBF Energy's Chalmette refinery acquisition, for example, is expected to be 20% accretive to its 2016 earnings, while the Torrance refinery is likewise expected to be immediately accretive. If Valero can find a similarly accretive deal, it could jump-start its stock price.

3. Ethanol prices rebound
While Valero's refining operations have been running on all cylinders, its ethanol operations have been under pressure due to weak ethanol prices. Last quarter, for example, its ethanol segment's adjusted operating income was just $37 million, which is a steep drop from the $154 million it earned in the fourth quarter of 2014. Furthermore, that drop was despite the fact that volumes were up 131,000 gallons per day to 3.9 million gallons due to ongoing optimization and plant improvements.

A big reason ethanol prices were under pressure is because ethanol production averaged 965,000 barrels per day in 2015, while consumption was just 910,000 barrels per day, according to the EIA. As things stand right now that oversupply isn't expected to abate because ethanol consumption is only expected to rise to 920,000 barrels per day in 2016 according to the EIA, which is based on ethanol's share of the gasoline pool averaging 10%, or right at what's known as the "blend wall." However, in late 2015 the Obama administration ordered refiners to blend 14.5 billion gallons of ethanol in 2016, or roughly 945,000 barrels per day, which would break through the blend wall and could push ethanol prices higher because that would be closer aligned to supplies.

Investor takeaway
After a strong year in 2015, Valero's stock has given back some of its gains in 2016. However, it could reclaim those gains, and more, if gasoline and ethanol demand are stronger than expected or if the company can find an attractive refining asset to acquire.