Geron's stock got clobbered by the moody market last month. 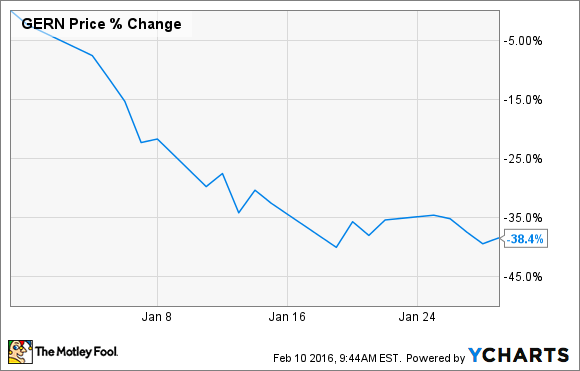 What: Shares of the clinical-stage oncology company Geron Corp. (GERN 4.38%) shed nearly 40% of their value last month, according to data provided by S&P Global Market Intelligence. Fortunately, this drastic sell-off didn't stem from a clinical or regulatory setback for the drugmaker -- but rather it appears simply to be the result of the market's change of heart toward all biotechs, especially risky development-stage companies like Geron.

So what: Geron is perhaps the poster child for high-risk/high-reward clinical-stage biotechs. After all, the biotech has put all of its weight behind developing a single drug following its restructuring process that started in 2011. This drug is a telomerase inhibitor called imetelstat that has the potential to be a truly disease-modifying treatment for deadly blood disorders such as myelofibrosis and myelodysplastic syndrome. As the market seemingly lost its appetite for risk altogether, though, it's not surprising this risky small-cap biotech hit the skids in January.

Now what: Unfortunately, Geron may not be able to break out of this funk anytime soon. Going forward, the next major set of catalysts that could drive shares higher are the top-line data readouts from imetelstat's ongoing clinical trials for myelofibrosis and myelodysplastic, and these trials probably won't produce anything of note until at least the fourth-quarter of this year.

Turning to the big picture, Geron does have a rather favorable licensing deal in place with Johnson & Johnson (JNJ 0.11%) for imetelstat that could trigger milestone payments of nearly $1 billion in total -- that is, if the drug continues down the road of turning into a truly game-changing treatment for myelofibrosis and possibly other blood-based disorders as well. As Johnson & Johnson has an almost uncanny ability of spotting promising cancer drugs early in their development, I think Geron does present a compelling value proposition for seasoned biotech investors that truly understand the significant risks involved.