Please ensure Javascript is enabled for purposes of website accessibility
Log In Help Join The Motley Fool
Free Article Join Over 1 Million Premium Members And Get More In-Depth Stock Guidance and Research
By Todd Campbell - Feb 14, 2016 at 6:41AM

Depomed, Amicus Therapeutics, and Portola Pharmaceuticals shares have been hit hard, but this Fool thinks they're still captivating investment ideas.

Love is in the air, so it's the perfect time to discuss why I still adore these three lesser-known companies even though their shares have taken a monstrous hit during the recent market sell-off. Without further ado, here's why I think you might end up loving these stocks, too.

The company's shares have been cut in half since last July, and the company's forward P/E ratio has fallen to just above 9. That's some hefty pessimism, but I think the company's valuation may finally reflect any risk to Depomed's acquisition-and-relaunch strategy. If I'm correct, then Depomed's future should be much brighter than its recent past.

Unlike Shkreli, who bought a decades-old drug for a rare parasitic infection only to raise its price by 5,000%, Depomed buys drugs in big and highly competitive markets. Specifically, the company has orchestrated a slate of acquisitions over the past three years in pain indications.

Last year, Depomed's struck its biggest deal when it spent roughly $1 billion buying Nucynta from Johnson & Johnson and while Depomed did relaunch the drug with a higher price, the increase only brought Nucynta's cost in line with the far more commonly prescribed Oxycontin. In my book, that's not Shkreli-style price gouging.

In the coming years, Depomed thinks Nucynta could eventually generate peak annual sales of $1 billion, and given that its prescription volume was 20.5% higher year over year in December, that may not be an unreasonable target. If $1 billion isn't unreasonable, then the company's profit should keep marching higher because Nucynta's sales are only running at a $65 million quarterly clip currently. Depomed is already expected to deliver EPS of $1.66 in 2016, up from a projected $0.79 in 2015, and given the potential for bigger profits down the line; I think this is a stock worth hitching up with for the long haul.

No. 2: Amicus Therapeutics (FOLD 0.56%)
Specialty drugs command specialty prices and the potential for an EU and U.S. approval for Amicus Therapeutics' Galafold in Fabry disease patients caused shares to soar in the first half of last year. However, that rally was short-lived because, after revealing a delay to its timeline for filing for FDA approval, Amicus Therapeutics shares have crashed 68% since last summer. 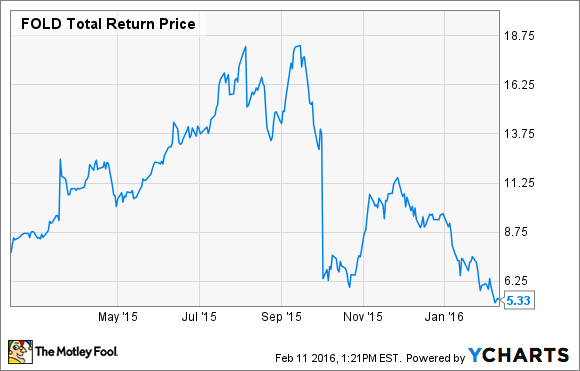 That's a painful drop for any investor to endure, but it's reduced Amicus Therapeutics' market cap to just $665 million, and if an EU approval of Galafold happens (a decision is expected soon), then the company's current market cap could undervalue Galafold's potential.

If approved, Galafold will compete against Shire's (NASDAQ: SHPG) Replagel in the EU, and since Galafold has a different method of action than Replagel, it could eventually end up being used alongside it. Either way, Replagel's $441 million in EU sales last year suggests this could be a nine figure drug for Amicus Therapeutics in Europe someday.

Of course, the big risk here is that the EU passes on Galafold and the company doesn't find a path to U.S. approval. If that happens, then it could cause Amicus Therapeutics to fall even further. It wouldn't, however, necessarily mean an end to the company. Last year, Amicus Therapeutics acquired Scioderm to get its hands on a phase 3 therapy for epidermolysis bullosa, another rare disease with nine-figure potential. Data from late-stage studies for this therapy should be available this year, so investors will want to watch this company closely in the coming months.

That's a huge haircut, and it shows just how nervous biotech investors are about the binary nature of FDA decisions and clinical trial results. However, investors may have overdone it on this stock, and if so, then buying the company here might make sense.

Portola Pharmaceuticals has already filed for FDA approval of andexanet alfa, and if it's approved, andexanet alfa would become the first FDA-approved reversal agent for factor Xa anticoagulants. That's important because factor Xa drugs are arguably better than the commonly used warfarin, and the need for anticoagulants is heading higher because the graying of America means a larger population of seniors at risk of suffering clots.

Factor Xa drugs are already hauling in billions of dollars in sales, and their growing use means that andexanet alfa is likely to become a must-have at hospitals and surgical centers. On Feb. 1, Bristol-Myers Squibb and Pfizer hinted at andexanet alfa's potential when the two inked a $120 million deal to license rights to it in Japan.

Portola also has a big data dump coming up for its own factor Xa anticoagulant, betrixaban, which is being studied head to head against the once-multibillion-dollar-per-year drug Lovenox. If betrixaban outperforms Lovenox, then Portola Pharmaceuticals could have the next big thing in factor Xa on its hands.

Admittedly, there's a risk that the FDA won't approve andexanet alfa, but I think that's unlikely based on the drug's clinical performance. There's also a chance betrixaban's trial comes up short. However, I think that Portola Pharmaceuticals only needs one of these catalysts to pan out to justify its current price, and if both pan out, then I think shares could head nicely higher.