Yum! Brands (NYSE:YUM) stock went on a bit of roller coaster ride in 2015, but in the end it finished right where it started.

The company hit a high of $95.90 during the summer, but it closed the year at $73.05, a slight loss from the $73.44 it opened 2015 at. Still, even though the company's shares went a lot of places to effectively get nowhere, the company did report some positive news when it delivered its Q4 an year-end earnings report.

Overall sales grew by 5% globally, with worldwide restaurant margin increasing 1.5% to 16%. Global operating profit was also up 7%, and the company added 2,365 new locations, including 743 in China, a division that saw sales increase by 2%.

"We are on track to complete the spinoff of our China Division, ultimately creating two powerful, independent, focused growth companies," he said in the earnings release. "The fundamental goal of Yum!, however, is unchanged. We are 100% dedicated to building and strengthening KFC, Pizza Hut, and Taco Bell all around the world, as strong brands are critical to delivering sustained growth and creating shareholder value over the long term."

After the stock's disappointing performance in 2015, there are a number of reasons to believe 2016 will be a more positive year for share price growth. 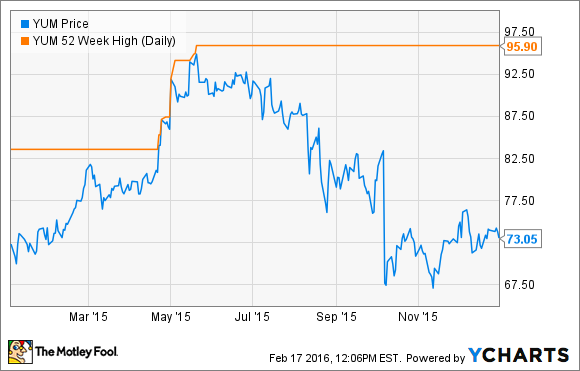 The chain has U.S. momentum
KFC sales rose 2% in the United States for the year, while Pizza Hut posted a 1% full-year gain, which is impressive because the brand struggled with its new custom pizza menu. Taco Bell doesn't break out its results by market but saw an 8% global sales jump for the year.

In a broad sense, the company seems to have found marketing ideas that click with U.S. audiences. KFC specifically has been very clever in switching the role of Colonel Sanders, the company's actual founder, between three different comedians. Those ads have generated media coverage and have made the brand a little bit hip again.

Taco Bell has achieved the same thing with its anti-McDonald's breakfast campaign, as well as its never-ending ability to deliver ridiculous new takes on the taco, like the Quesalupa, which it hyped in a Super Bowl ad. Even Pizza Hut seems to have closed 2015 on firm footing, moving its focus away from its new pizza menu designed to compete with fast-casual brands and toward what it does best -- pizzas with things stuffed in the crust (in this case, cheese-filled garlic knots).

Your rival's loss is your gain
The just-concluded E. coli scandal cost Chipotle Mexican Grill (NYSE:CMG) nearly 15% in comparable restaurant sales in the fourth quarter.  Many of those lost customers -- people who were scared away after 55 people in 11 states fell ill after eating Chipotle food that was possibly tainted, according to the Centers for Disease Control -- probably chose to eat elsewhere.

That probably helped Taco Bell's gains in Q4, but it could have a longer reaching impact, as customers who shied away from fast food in favor of the higher-quality offerings at fast-casual eateries might be slow to return. That could be good for all of the Yum! brands, as sampling by an audience that once considered itself too good for Taco Bell, KFC, and Pizza Hut might lead them to learn the joys of fast-food Mexican, fried chicken, and pizza.

Chipotle will recover its audience, or at least most of it, but the scandal could linger for months, producing an ongoing boost for rivals.

The China spinoff removes uncertainty
Operating in China has been a challenge for Yum!, as it has been for most U.S. brands, and splitting out that division should provide more revenue predictability on a quarter-to-quarter basis. The spun-off company, Yum! China, will be a franchisee of Yum! Brands with mainland China as its territory, according to a press release announcing the deal.

Creed believes the setup will "allow each company to intensify focus on its distinct commercial priorities, allocate its own resources to meet the needs of its business, and pursue distinct capital structures and capital allocation strategies." He also explained that the change will give the original company steadier revenue streams.

"Yum! Brands will have a more stable earnings stream typical of a franchise company powered by industry-leading brands, while also benefiting from the development of the China business as a unique growth engine," he said. "In turn, our China business is self-sufficient and scalable with strong leadership in place and is well positioned to realize its full potential as a standalone business to capture the compelling opportunities in China."

This move reduces risk for the original company while in theory unlocking opportunity in China. Both Yum! companies will still be tied together, but they will be in one case more free to operate according to the needs of the Chinese market, and in another be able to sit back and collect franchise fees.