After posting a hefty loss thanks to some asset writedowns, Ultra Petroleum says this year could be even tougher as debt worries mount.

Ultra Petroleum (UPL) has been in a very tough stretch over the past few years. Ever since natural gas prices started sliding in 2012, the stock has continuously tumbled, losing more than 99% of its value. 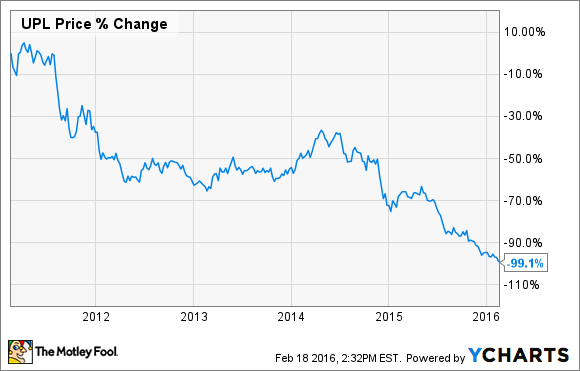 With prices still at unprofitable levels for just about everyone in the industry, Ultra's fourth-quarter earnings ended the year on a very sour note. To make matters worse, management's outlook for 2016 looks even bleaker. Let's take a quick glance at the numbers from this past earnings report and figure out where the company might be headed in the year ahead.

There is such a large discrepancy between Ultra's adjusted and real earnings because it realized a $3.14 billion asset impairment to write down the value of its natural gas properties. At today's prices, most of its reserves are considered uneconomical and therefore must be written down from the balance sheet. Ultra can still revisit these reserves in the future if oil and gas prices increase again, so it's basically a non-cash impairment that doesn't reflect the quarterly performance of the company.

What happened with Ultra Petroleum this quarter

What management had to say
If you were looking for some comfort from management that things will get better, you won't be finding it this quarter. Based on statements by CEO Michael Watford, Ultra's financial situation is looking grim for the year:

With the year-end ceiling test write down, the total assets on our balance sheet is now less than $1 billion. Our year-end 2015 SEC PV-10 reserve value, as Brad said, is $1.9 billion. And if calculated today at current commodity prices, would be a good bit lower. We have been working since early fourth quarter 2015 to obtain relief on debt covenants on several of our creditors. So far, unsuccessfully.

Now due to the continued deterioration in our industry, we need to restructure our debt with our creditors, providing concessions and discounts. Currently, we are working on 4 various agreements with key creditors to put a pause on credit issues to allow more time for restructuring discussions.

Looking forward
For the coming year, Ultra plans to spend about $260 million in total capital expenditures. So unless operations start to consume cash, the recent borrowings from its credit facility should be enough to cover those capital costs. The company anticipates that spending at this level, mostly on its Pinedale fields, will be sufficient to keep production levels pretty flat compared to 2015.

Ultra Petroleum is behind the 8-ball here, as evidenced by the somber comments from management. With oil and gas prices this low, it will need some love from its lenders soon -- otherwise, it will no longer be in compliance with its debt covenants. Investors should be keeping tabs on how it is able to further reduce its production costs and see if there is any increase in gas prices in 2016. Without them, Ultra Petroleum will continue to be stuck in this dismal situation.

The Motley Fool recommends Ultra Petroleum. Try any of our Foolish newsletter services free for 30 days. We Fools may not all hold the same opinions, but we all believe that considering a diverse range of insights makes us better investors. The Motley Fool has a disclosure policy.