Please ensure Javascript is enabled for purposes of website accessibility
Log In Help Join The Motley Fool
Free Article Join Over 1 Million Premium Members And Get More In-Depth Stock Guidance and Research
By Tyler Crowe, Sean Williams, and Matthew DiLallo - Feb 20, 2016 at 9:02AM

With the energy market still reeling, investments in Dividend Aristocrats such as ExxonMobil, Chevron, and Helmerich & Payne are looking that much more attractive.

In today's energy market, one of the few positive things that investors can say is, "Hey, at least I'm still getting my dividend." However, as energy companies begin to announce guidance for 2016, several of the dividend payers are either cutting or outright eliminating their dividends. It would seem that the only place left for some form of dividend security is the Dividend Aristocrats -- a group of a few dozen publicly traded companies that have increased their dividends for at least the past 25 consecutive years.

So we asked three of our contributors to highlight a Dividend Aristocrat in the energy space that they see as a company they would consider buying today. Here's what they had to say.

Sean Williams
There's been little love for the energy sector over the past year-and-a-half given the greater than 70% tumble in crude prices, but when we're talking about Dividend Aristocrats, my eyes land on Chevron (CVX 1.20%).

Let's get the basics out of the way: Falling oil and natural gas prices are weighing on Chevron. There's no way to sugarcoat it, and it's quite possible that Chevron could wind up paying more via dividend than it generates in profit in 2016 because of weak commodity prices. But there are also reasons to believe Chevron's long-term outlook is intact and that investors may be missing the bigger picture.

For instance, investors appear laser-focused on Chevron's drilling operations, which are being adversely affected by sub-$30 oil. But they might be forgetting that lower oil prices can boost refining demand and lower input costs for Chevron's chemical operations. Refining and chemicals won't completely offset the downside pressure from falling commodity prices, but these segments should keep Chevron healthfully profitable.

The Gorgon Project off the coast of Australia is another big long-term positive for Chevron. The company recently signed a long-term contract with China Huadian Green Energy for 1 million metric tons of LNG over a 10-year period beginning in 2020. In combination with prior deals, Chevron has secured long-term contracts for more than 80% of its Gorgon and Wheatstone production capacity. This helps reduce wholesale LNG and natural gas price exposure, which is a big positive with prices in freefall at the moment.

Lastly, buying integrated oil and gas providers is a smart play on a growing and industrializing planet. Oil resources are finite, so the presumption is that oil prices should rise over the long run, further improving the outlook of well-diversified energy companies like Chevron.

Currently sporting a 5% yield, Chevron is a Dividend Aristocrat you should have your eye on.

Matt DiLallo
The recent downturn in the energy sector has had a huge impact on dividends, which used to flow freely out of the sector. Many producers have significantly reduced, if not suspended, dividend payments to preserve cash. In fact, large energy companies are expected to slash dividend payments by 9% this year alone, which would reduce global energy dividend payouts by 22% since peaking in 2014. Suffice it to say that's it's not a great time to be an income investor seeking oil-fueled dividends.

That's unless, of course, you're invested in ExxonMobil (XOM 2.23%), which not only has maintained its payout, but also grew its dividend last year. That wasn't an anomaly, either, because ExxonMobil has grown its dividend every year for more than three decades.

That said, times are very tough in the industry, and even ExxonMobil isn't immune. Exxon's cash flow has been falling along with the price of oil, and this is pushing up its dividend payout ratio. In fact, that ratio was 75% last year -- the highest it's been since the early 1990s. The payout ratio is projected to be more than 100% in 2016 if commodity prices don't improve. This would mark the first time in more than 30 years that Exxon paid out more than it earned. Still, despite that worrisome ratio, ExxonMobil's dividend isn't likely to drop anytime soon, because the company's credit is AAA-rated, which gives it the ability to borrow to pay for its dividend and capital expenditures during tough times like the one the industry is currently going through.

Because of Exxon's rock-solid credit rating and its history of growing its payout, it's the one Dividend Aristocrat I'd want to own during the downturn.

Tyler Crowe
Helmerich & Payne (HP 1.04%) may not be the typical company you would expect to see on a Dividend Aristocrat list, but its 42-year track record of annual dividend increases outpaces both Chevron's and ExxonMobil's. What's even more astounding is that as an owner and lessor of drilling rigs, it has maintained that record in a segment of the energy sector that is extremely competitive and doesn't have a whole lot of economic moats. This shows that Helmerich & Payne has an amazing management team that can handle the ups and downs of the commodity market and identify long-term trends in the oil drilling space.

While many of its competitors are sitting on older rigs that don't have much use in today's market, Helmerich & Payne pounced on the opportunity to build a fleet of rigs that are capable of drilling complex and technologically demanding shale wells. Today, more than 99% of the company's rigs in the U.S. are built to handle shale wells, which has helped the company take market share.

The overall market for land rigs is absolutely brutal right now, as the active rig count in the U.S. is approaching its record low set in 1999. At the same time, though, Helmerich & Payne has remained modestly profitable, is generating more than enough free cash flow to cover its dividend, and still has more cash on hand than total debt on the balance sheet. 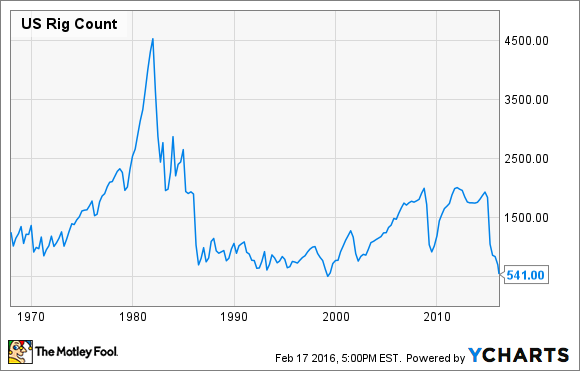 With Helmerich & Payne's dividend yield at about 5% right now and shares down more than 55% since oil and gas prices started to collapse, investors can get the comfort of a Dividend Aristocrat like ExxonMobil and Chevron but also get better upside potential from a company that has seen its shares take an outsized. That's the kind of energy Dividend Aristocrat I want to own.