Once on its deathbed, Sirius XM Holdings (NASDAQ:SIRI) has recovered from the recession and competitive threats to prove itself a consistently profitable, stable company

While profits continue to grow, the stock has been relatively flat for the past couple years. Here are the three charts that explain everything you need to know about the satellite radio provider.

Subscriber growth
Underpinning Sirius XM's business is the need for subscribers. Despite competition from Pandora Media (NYSE:P), Spotify, and more recently Apple, the company has managed to grow its subscriber base steadily for the last six years, as the chart below shows.

During that time, Sirius XM's subscriber growth has ranged between 6.9% and 9.2%. Last year, its subscriber base grew by 8.4%, boosted by a year that saw record car sales. Auto sales are the biggest driver of Sirius XM's growth, as new cars often come with a free trial subscription of the product and most new cars come with the system built-in, replacing old cars that may not have had it.

During that period, Sirius XM's average self-pay monthly churn, the percentage of customers who quit the service each year, has been very stable as well, ranging between 1.8% and 2%. That means that Sirius XM turns over about a quarter of its customer base each year; however, it is able to attract enough new subscribers to grow the overall figure. That steady churn figure indicates that the company's programming appeal has been relatively stable throughout the years, as are other factors that might cause someone to quit the service, like moving to a city or the economy.

The final component of Sirius XM's revenue is how much it charges its subscribers, or average revenue per user. As the chart below shows, that figure has steadily increased since 2011, indicating Sirius XM is able to pass on modest price increases.

Add it all together and you can see that revenue has steadily grown over the last five years, and is set to hit $5 billion this year. 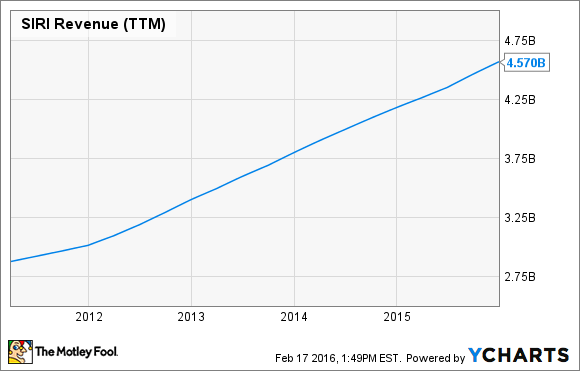 The cost structure
Understanding how Sirius XM brings in revenue is only half the picture. In order to fully understand the company's business and its financials prospects, we have to take a look at the cost structure.

Sirius's subscriber model benefits from the fact that it is able to grow its base of subscribers while keeping programming and content costs flat. However, the company's biggest line item, revenue sharing and royalties, has been growing faster than revenue for several years.

As the chart above shows, expenses for revenue sharing and royalties have more than doubled in the last six years, outpacing revenue growth. That means the satellite radio is being forced to share a greater percentage of its revenue with automakers, whom it pays to install radios, and artists, who get a royalty for songs played on Sirius stations. Most recently, revenue sharing increased 28% last year to $1.03 billion due in part to a settlement on pre-1972 recordings and an increase in the rate of post-1972 recordings.

While revenue sharing costs as a percentage of revenue may be growing, the company is still controlling enough of its other costs to deliver steadily increasing profit. 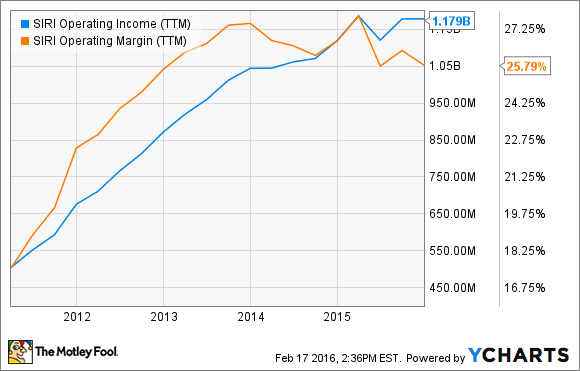 Though operating profit growth has slowed in recent quarters, it's still more than doubled in the last five years, and its operating margin -- at more than 25% -- signals a strong business.

While Sirius XM continues to add subscribers, rumors are circulating of a buyout of rival Pandora. Once upon a time, Pandora was the upstart as streaming was supposed to overtake satellite radio. Sirius XM's success would seem to point to the benefit of paying subscribers, though the company also receives lower royalty rates than Pandora.

Regardless, Sirius XM's formula of music, talk radio, comedy, and sports has proven successful, and even without Howard Stern in the fold for another five years, it should continue to add subscribers.