Chesapeake Energy's (OTC:CHKA.Q) financial condition went from a source of strength heading into 2015 to one of major concern by the end of the year. That's after it burned through billions of dollars pursuing production growth even as commodity prices were plunging due to oversupply. Needless to say, the company has a lot of questions to address when it reports fourth-quarter results on Wednesday morning.

1. How bad was the cash burn last quarter?

Chesapeake Energy started 2015 with more than $4 billion in cash on its balance sheet. However, by the end of the third quarter, its cash balance slipped below $2 billion. Further degradation of its cash balance is to be expected in the fourth quarter because natural gas prices continued to worsen: 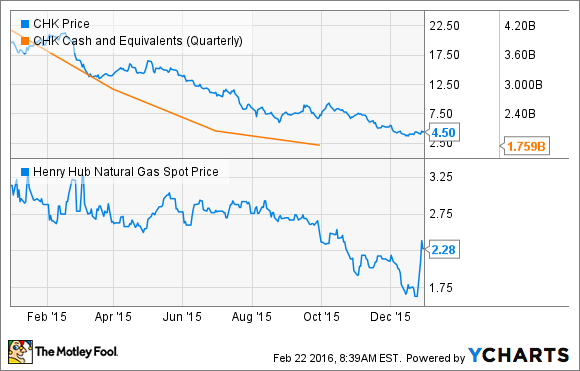 The question that remains to be answered is whether its cash burn rate continued at its prior clip, which according to analysts put it on pace to run out of cash in less than seven months, or if it slowed the burn. For example, the company could have slammed the brakes on capital spending or slowed other cash outflows such as operating costs. Because cash burn is such a concern, investors and analysts want to see that it significantly slowed spending last quarter.

2. What's the game plan on restructuring its debt?
The reason the company's cash burn rate is such a major concern is because of the mountain of debt on its balance sheet. During the quarter, the company made an ill-fated attempt to address its debt by undertaking a second lien debt exchange. That exchange, however, was a miserable failure for two reasons. First, it was viewed by the market as a distressed exchange because it was the same path taken by financially distressed drillers like EXCO Resources (NYSE: XCO). Furthermore, unlike EXCO Resources' exchanges, which were geared toward meaningful debt reduction, Chesapeake's exchange was intending to push back near-term debt maturities, which didn't work.

That unsuccessful exchange only exacerbated fears that Chesapeake Energy had dug itself into a financial hole from which it would be unable to escape, leading to rumors that the company had hired bankruptcy restructuring lawyers. That said, tales of a looming bankruptcy filing were quickly dismissed by the company, which said it was "aggressively seeking to maximize value for all shareholders." What investors want to see this quarter is what tangible steps it's taking to accomplish that goal. They are sick of the rhetoric that the company is working on a plan. Rather, they want to see an action plan -- or, better yet, actions being taken such as the announcement of a major asset sale.

3. What's the plan for 2016?
After investing heavily to grow production in 2016, investors want to see the company significantly pull back on spending in 2016. Ideally, its 2016 capex plan would be one that balances projected cash flow at current commodity prices with capital spending, even if that means a significant drop in production. What investors don't want to see is the company planning to burn through more cash just to keep production flat when the market is still oversupplied.

An ultra-conservative plan is what many of its shale-focused rivals are pursuing in 2016. Continental Resources (NYSE:CLR), for example, cut its 2016 capex plan by 66% over what it spent last year. In doing so, Continental Resources won't be spending enough money to drill the wells necessary to even keep its production flat. Instead, Continental Resources expects its production to decline from its 2015 average of 221,700 barrels of oil equivalent per day, or BOE/d, to 200,000 BOE/d, or a roughly 10% year-over-year decline. A similarly steep cut by Chesapeake Energy is a necessity given industry conditions right now.

Investor takeaway
Chesapeake Energy investors want answers this week. They want to know if the company was able to significantly slow its cash burn in the fourth quarter as well as what steps it's taking to address its debt situation. Also, they want to see that it plans to be ultra-conservative in 2016, not continue its profligate ways. The answers to these questions will show investors how seriously the company is taking its current financial situation and whether it is making tangible progress to make it through the downturn without having to declare bankruptcy.