Please ensure Javascript is enabled for purposes of website accessibility
Log In Help Join The Motley Fool
Free Article Join Over 1 Million Premium Members And Get More In-Depth Stock Guidance and Research
By Tyler Crowe - Feb 24, 2016 at 11:40AM

With shares trading as low as they are, an earnings statement that says, "Hey, we didn't lose as much money as you thought we would" is enough to get investors excited.

What: Shares of Chesapeake Energy (CHKA.Q) are up 16% as of 11:30 a.m. ET today after the company's most recent earnings results showed a sizable loss per share but beat analyst expectations.

So what: If you strip out the $2.8 billion in asset writedowns and impairments for the quarter, Chesapeake Energy posted a normalized loss per share of ($0.16), which beat the consensus estimate of ($0.18) per share from S&P Global Market Intelligence. Considering how much shares of Chesapeake have declined in the past year, any news that can be portrayed as good news is likely to give the stock price a decent boost. 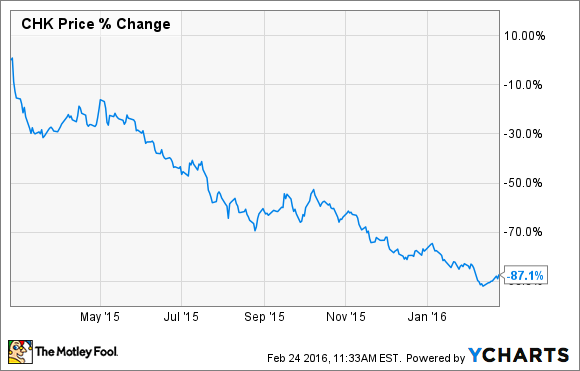 Another possible piece of good news from the recent earnings report is that the company may reduce its spending for 2016 and its debt load. Chesapeake's capital expenditure budget for this year is slated to be $1.3 billion-$1.8 billion, about a 57% reduction from last year. At the same time, management believes it can achieve a production decline of 0%-5% in 2016 at these lower spending levels. If that is the case, it may help close its immense spending gaps. Also, thanks to asset sales and some debt exchanges, total debt outstanding is $9.5 billion, down from $11.8 billion at the beginning of 2015.

Now what: Chesapeake may have helped itself with this quarter's results, but the company is a long, long way off from getting out from under its massive debt load. Also, it is still posting some losses despite an average realized price of $64 per barrel in the previous quarter. As its hedging position -- the thing that has kept realized prices so high -- the company's income statement will look even worse. Considering Chesapeake's tough financial position, any money going toward its stock is purely a speculative bet on oil prices rising, because if low oil prices persist, it won't be able to survive.