Please ensure Javascript is enabled for purposes of website accessibility
Log In Help Join The Motley Fool
Free Article Join Over 1 Million Premium Members And Get More In-Depth Stock Guidance and Research
By Daniel Miller - Feb 27, 2016 at 10:40AM

Come one, come all, Consumer Reports' 2016 Annual Top Picks are in and there were a slew of new winning vehicles. One of those includes Ford Motor Company's (F -1.91%) most well-known, best-selling, and highly profitable F-150 full-size truck.

Criteria
Consumer Reports bases its picks on performance, reliability, owner satisfaction and safety. More specifically, top picks for each segment must rank at or near the top in the road-test score; they must have an average or better predicted reliability rating based on problems reported in CR's 2015 auto survey; whether or not buyers would buy the car again; and the winners must perform effectively in crash and rollover tests.

Essentially, being a top pick means good things. So what brought Ford's F-150 back to the top?

Aluminum pays off
Consumer Reports noted that in large part due to the F-150's fuel economy, quiet ride and a vastly improved infotainment system – remember that Ford has been dinged for years in quality reports for its much maligned MyFord Touch system – the F-150 was the top pick for the Pickup Truck segment. It was the automaker's first win in the Pickup Truck category since 1999.

"By eschewing traditional steel body panels, Ford created a pickup that weighs less, enabling it to be quick off the line and fuel-efficient. The cabin is extremely quiet and spacious. The intuitive Sync 3 infotainment system is a welcome update from the MyFord Touch. The F150 has the best predicted reliability of any domestic truck." According to Consumer Reports' 2016 Top Picks.

Further, it was an even bigger win for Ford than many realize because Detroit's second-largest automaker hasn't had a vehicle win a Consumer Report top pick in any segment since 2012 when the Mustang won for best sports car under $40,000.

The question facing investors, as well as Ford F-Series loyalists, is whether or not the switch to aluminum will impact sales results. So far, the major switch to aluminum has paid off critically with the truck collecting many awards, but it's come at a temporary cost to sales. That's because the switching of factory production to the new model, with aluminum being substantially different to work with than steel, made accelerating production of the truck a nearly year-long process.

It wasn't until the back end of 2015 that production hit full speed, and that enabled General Motors' (GM -1.85%) combined sales of the Silverado and Sierra to outsell the F-Series for the first year since 2009 – last year the sister trucks combined for more than 824,000 units while the F-Series just topped 780,000.

However, if you total the sales over the past few years, the closeness of the sales competition is pretty remarkable. From the beginning of 2010 through the end of 2015 the F-Series totaled 3.97 million units sold in the U.S. while GM's two trucks combined to sell 3.87 million units. If you want to take the competition back even further, it's still amazing how close the sales are between Detroit's two largest automakers. 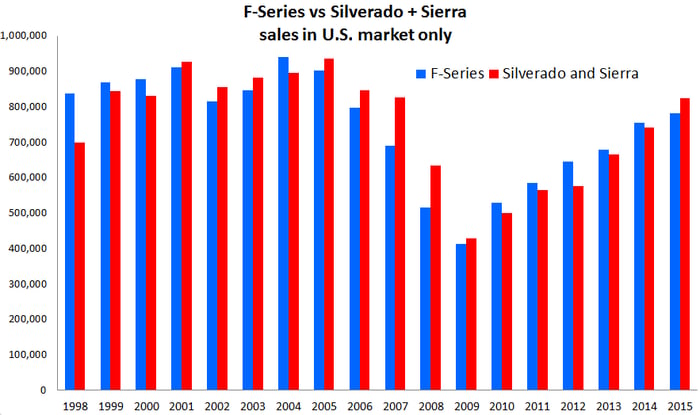 Throughout that entire graph, Ford's F-Series sold 13.38 million units while the GM sister trucks sold 13.47 million – talk about one of the greatest rivalries in the auto industry!

Looking beyond the F-150's win, there are some other worthy highlights to take note of.

First, Toyota Motors' (TM 0.37%) Camry chalked up another win, its fifth Top Pick honor over the past two decades in the midsized car category, although it was its first victory in the segment since 2012.

Consumer Reports clearly thinks highly of the Camry. "The Camry's no-fuss driving experience – great outward visibility, controls that fall easily to hand, a roomy interior – may not be the most thrilling in its class, but it's far from plain. The solid Camry delivers year after year of outstanding reliability, which when combined with impressive crash-tests results, make it a near-perfect sedan."

Perhaps a little surprising to many looking over the rankings was that Subaru, often an automotive brand left in the back of consumers' minds, found its way into two Top Pick spots. Its Forester SUV and Impreza managed to win for Small SUV and Compact Car, respectively. However, if you haven't been keeping close track of these awards, you might be surprised to know it's actually the fifth consecutive win for the Impreza and second consecutive win for the Forester.

Ultimately, as the competition in the automotive industry heats up any type of win in comprehensive studies like this is a great tool. These things add up in consumers' minds, and that means market share -- a critical metric for automakers worried about "peak auto" sales in the U.S. market. For the rest of CR's picks, check them out here.