Indexes closed out the month roughly unchanged after a brutal January cleaved 5% off the Dow.

After spending much of the day in positive territory, stocks fell during the afternoon hours to end lower today. 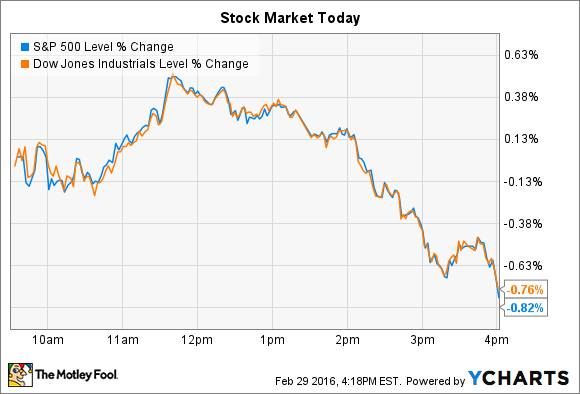 The Dow Jones Industrial Average (DJINDICES: ^DJI) shed 124 points, or 0.7% and the S&P 500 (SNPINDEX: ^GSPC) lost 16 points, or 0.8%. The Leap Day decline left both indexes roughly unchanged for the month after losing over 5% in January.

Berkshire Hathaway's bright long-term outlook
Berkshire Hathaway rose 2% after the conglomerate announced a 31% jump in fourth-quarter net income, to $5.5 billion. That boost included an 18% earnings improvement at Berkshire's diverse collection of businesses like GEICO insurance and BNSF railroad, along with a tripling of income from equity investments and derivative bets made by CEO Warren Buffett.

Book value per share, a key metric for tracking the underlying value of the business, rose 6.4% in 2015 compared to a 1.4% uptick in the broader stock market and a 12% decline in Berkshire's share price .

"Last year was a good one," Buffett said in his annual letter to shareholders (link opens PDF). Some of the highlights he mentioned included; dramatic improvements to BNSF's railroad infrastructure, the 13th straight year of underwriting profit for the insurance operations, and the massive purchase of Precision Castparts for just over $32 billion of cash.

As usual, the CEO's letter was stuffed with business and investing gems for shareholders (or any fan of capitalism). This year he dedicated some time to expressing his optimistic reading on the long-term strength of the U.S. economy. "For 240 years it's been a terrible mistake to bet against America, and now is no time to start," Buffett said. "America's golden goose of commerce and innovation will continue to lay more and larger eggs. And, yes, America's kids will live far better than their parents did," he argued.

United Natural Foods' low-growth forecast
United Natural Foods' stock fell 23% today, bringing its one-year decline to a brutal 63%. The organic foods distributor, which counts on Whole Foods (WFM) supermarket stores to purchase over 25% of its products, posted surprisingly weak quarterly results while lowering its growth estimate for the year. At the same time, the company revealed that it is acquiring Haddon House Foods, a regional distributor, for $217 million in cash.

UNFI's preliminary reading on the quarter that just closed showed sales ticked higher by 2% as adjusted earnings declined to $0.48 per share from $0.65 per share a year ago. Results were pressured by increased competition in the organic and natural food space as the food category moves into the mainstream. "Our updated results reflect the rapidly changing near term industry dynamics facing UNFI and its constituents," CEO Steven Spinner said in a press release .

That challenging environment convinced Spinner and his team to dial back sales growth expectations to roughly 2% this fiscal year, down sharply from last year's 20% rise. GAAP earnings will weigh in at $2.32 at the midpoint of guidance, down from $2.72 in fiscal 2015 as the company works to reduce costs while investing in the business. "Our view of fiscal 2016 reflects our commitment to investing in growth throughout our organization while we continue to evaluate our cost structure and customer experience," Spinner said.