In a world worried about stocks whose growth prospects are tied to the economy, fertilizer stocks are becoming more interesting.

Looking at The Mosaic Company's (MOS -2.04%) recent fourth-quarter earnings presentation, it's clear that management is encouraging investors to look beyond the near-term pressures and consider the long-term case for the company. Investing in the fertilizer sector offers a classic example of the conundrums presented by highly cyclical stocks. Value trap or long-term buy? Try to pick the bottom, or just buy and wait for value to out itself? And does your target have a long-term structural problem, or is it merely in a temporary and cyclical decline?

As you can see from the chart above, it's been a tough five years for both Mosaic and its key rival, Potash Corporation of Saskatchewan (POT).

However, Mosaic CEO James O'Rourke decided to focus on the future on the recent earnings call. He asserted:

Stronger company/business resilience
These aspects are closely related. If Mosaic can continue to generate earnings and cash flow during the worst of the downturn, then it's likely to be well positioned to benefit in the upturn. A good way to measure trends in a company's financial health is by looking at its current ratio (current assets divided by current liabilities): A higher number is better, in that it shows the company's ongoing ability to cover its liabilities.

Mosaic's current ratio has come under pressure in the downturn, but it's better than the equivalent figures for Potash or Agrium, and it's still significantly better than the ratio before the last recession -- not something you can say about Agrium or Potash.

Moreover, a look at earnings suggests that Mosaic is dealing better with the downturn than Potash. The chart below shows historical normalized EPS. Analysts' estimates are for Mosaic to generate $1.75 in EPS in 2016, while Potash is forecast to deliver EPS of $1.04. As you can see from the chart, Mosaic's projected EPS for 2016 is higher than the trough (four-quarter basis) last time around.

Investing conclusion: On a relative and absolute basis, O'Rourke's commentary stacks up: Mosaic is well positioned to deal with the downturn.

Agricultural market
That said, earnings and operational metrics can and will deteriorate in a downturn, and conditions could easily get worse. The primary determinants of fertilizer spending are farmers' incomes (largely determined by crop prices) and, to a lesser extent, issues like farmers' access to credit, and the impact of a stronger dollar on overseas demand.

O'Rourke sought to isolate the current difficulties to a macroeconomic consideration rather than "the current supply and demand balance." In a sense, the two are linked: If crop prices fall, then demand will too, and the supply/demand balance will be negatively affected. However, as he later pointed out, "Cycles can turn more quickly in agriculture because of unpredictable weather and the consistent underlying global demand for food." Indeed, it's precisely the excellent crop-growing conditions in the last three years that have led to falling crop, and fertilizer, prices.

O'Rourke's view is backed up by Potash Corporation's forecast for potash operating rate (shipments divided by capacity) to trough in 2016 and then increase, with shipments returning to their long-term trend line. 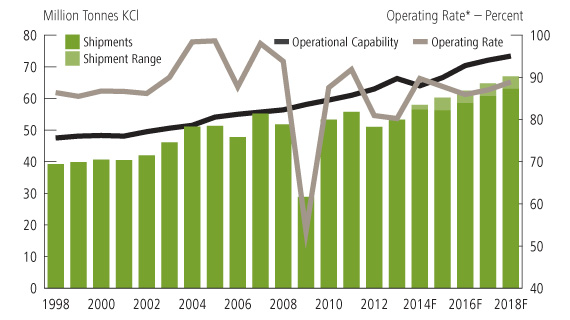 Moreover, the operating rate for phosphate fertilizer (Mosaic has a heavier weighting in phosphate than Potash Corporation does) is also expected to stabilize in future years. 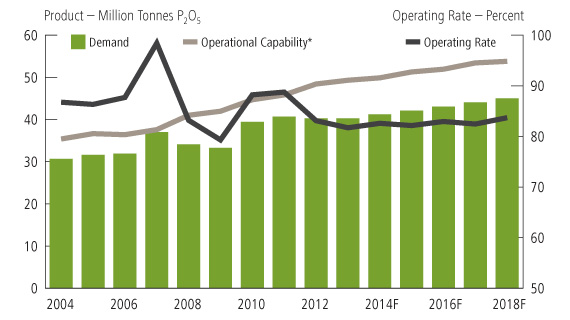 Investing conclusion: The market may fret about current conditions, but in reality, Mosaic is dealing well with them, and any favorable conditions (e.g., poor weather leading to higher crop prices) could promote an improvement in prices and income for fertilizer manufacturers.

What to do next?
No one really knows what the weather will be like or where crop prices will go. Ultimately, investing is always a decision made on a risk/reward basis, and considering the pessimism in the marketplace -- expressed by comparing enterprise value (market cap plus net debt) over revenue in the chart below -- it's fair to say that the market is pricing in some severe conditions for Mosaic and Potash in 2016.

Mosaic has been hit by concerns that there is a long-term overbalance of supply in the market for phosphates and potash, but O'Rourke's commentary looks accurate. Ultimately, I think buying Mosaic stock gives you the potential to benefit from higher crop prices, and that's not a bad thing to have in your portfolio in the current environment.

Why Shares in Mosaic, CF Industries and Intrepid Potash Soared This Week