Ford posted a great sales month, no question. The only potentially concerning factor was the increase in fleet sales.

What a difference a month can make. In January, Ford (F -1.06%) disappointed investors with its 3% year-over-year decline in sales. Even worse, Ford's retail sales dropped 11%, which suggests fleet sales helped salvage its overall figure.

One month doesn't make a trend, however, and investors hoping that Ford would bounce back fast were encouraged by the automaker's February results, released on Tuesday. Let's dig into the details and look at some of the key takeaways from last month's sales data.

SUVs are still red-hot
Starting from the top, Ford's sales in the U.S. jumped 20% compared to February 2015, to 217,192 units. Its retail sales increased 11%, giving the automaker its best February retail result since 2005. And it should come as no surprise that the driver behind that result was SUVs.

It's no secret that sales of SUVs have been red-hot in the U.S. market, and consumers continued to drive them off dealership lots at a rapid rate last month. Looking specifically at retail sales, Ford's 22% gain in SUV sales completely outclassed the automaker's car segment, which gained 6%, and truck sales, which increased by 5%.

All in all, Ford's SUVs recorded their best-ever February sales result. A few standouts in the segment were the Edge, Explorer, and Escape, which posted year-over-year gains of 91%, 18%, and 14%, respectively. While SUV sales definitely powered Ford's February, it's also fair to say that it was simply a good month overall, with only two nameplates showing declines in year-over-year sales.

F-Series rebounds
January is historically a weaker month for F-Series truck sales, and that pattern held true this year: Sales of the truck line declined by 5% to kick off 2016, making January the worst sales month for the F-Series in almost two years. Because the F-Series are Ford's most profitable vehicles, investors had been watching February results closely, hoping to see a sales rebound. 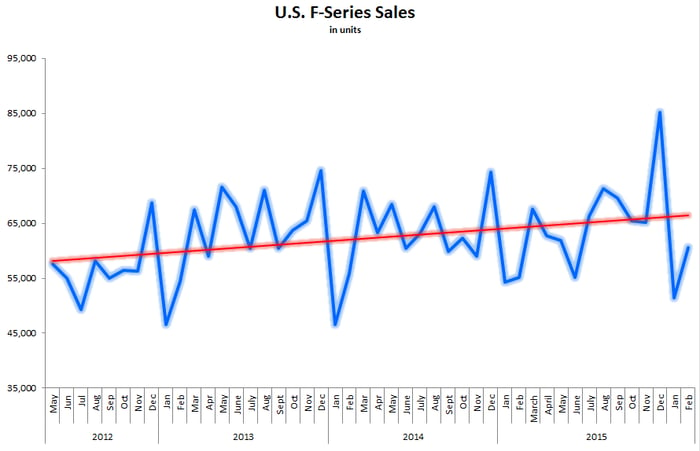 That's exactly what investors received, with sales of the truck line moving nearly 10% higher in February compared to the prior year. That was enough to top 60,000 units and powered the F-Series' 2016 total to the positive side, currently up 2.4% compared to the first two months of 2015. Better yet, the F-Series has continued to record strong average transaction prices (ATPs) alongside sales gains. The F-Series' ATPs were up roughly $1,800 from a year ago, which is music to investors' ears.

The key here is to understand if that's a temporary timing blip or a change in strategy -- because Detroit automakers have preached lessening their dependence on less profitable fleet sales, such as to rental companies. Investors shouldn't be concerned yet, and Ford forecast that fleet sales would be elevated in the first half of 2016, taper off during the second half, and end the year only slightly higher than 2015's figures.

Ultimately, it was a great month for Ford, which arguably outshone the rest of the automotive industry. Expect strong SUV and F-Series sales to continue powering healthy profits for the company -- but keep an eye on fleet sales as the year moves along.