The fashion company is beginning to recover from an accounting scandal. Could shares go higher from here?

One of Iconix's many brands. Source: Iconix.

What: Shares of Iconix Brand Group (ICON) recovered some of its recent losses last month, gaining 31%, according to S&P Global Market Intelligence, as the company named a new CEO and said it would soon release restated financial statements in response to an SEC request. But as you can see from the chart below, the stock is still down 75% over the past year despite last month's surge. 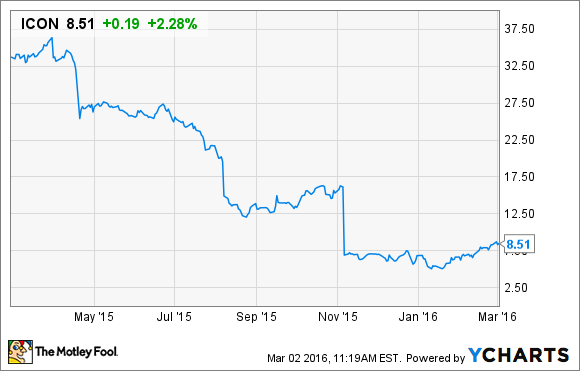 So what: Nothing will rattle investors like an accounting scandal. The owner of brands including Candies, Danskin, and Rocawear issued a statement on February 18 that it will restate historical financial statements based on its own conclusions. Peter Cuneo, interim CEO at the time, reminded investors that there would be no impact on free cash flow, and reaffirmed the company's 2015 adjusted EPS guidance of $1.35-$1.40.

Earlier in the month, the stock's momentum seemed to carry over from January as BlackRock, an investment management group, purchased 2 million shares of Iconix, and the stock got another boost when the company named a new CEO on February 23. John Haugh will take the CEO chair on April 1. He's previously served as an executive with Luxottica Retail, and sits on Aeropostale's board of directors. Most importantly, Haugh can help the company start a new chapter after the CEO, CFO, and COO all resigned last year in the wake of the accounting scandal.

Now what: With the stock now up nearly 100% since its bottom in January, investors seem to believe that the worst of the accounting scandal is behind the company. While management has yet to release the restated financial statements, the hope is that, with a new CEO, the worst is in the rear view mirror. If Cuneo's guidance is correct, then the stock still looks like a steal at today's price with a P/E of just 4.5. Additionally, the sale of its Badgley Mischka label for $16 million on Wednesday shows there's still plenty of value in its portfolio.