After beating down the share prices of LINN Energy, California Resources Corporation, Denbury Resources, and Whiting Petroleum for two years now, Wall Street is using the recent oil price climb to throw these stocks a bone.

What: As the price of oil climbs yet again today, it's taking the share prices of several independent oil and gas producers with it. As of 11:30 a.m. ET, the price of West Texas intermediate climbed above $35 for the first time in a couple of months. The companies in the oil patch leading the way today thus far are LINN Energy (LINEQ), California Resources Corporation (CRC), Denbury Resources (DNR), and Whiting Petroleum (WLL). All of them have seen their shares climb 20% already. 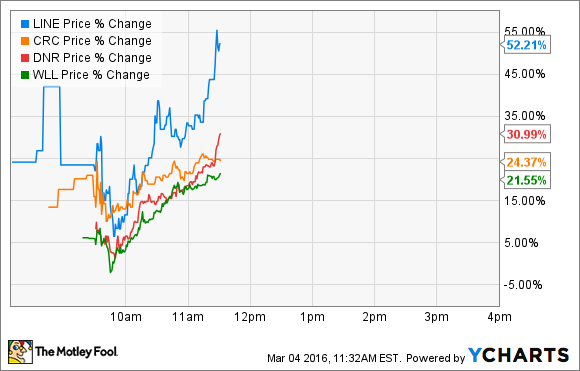 So what: One thing to keep in mind here is that these massive percentage gains are off a very small base. If we compared all of the gains we have seen today to the losses over the past couple of years, they'd be barely noticeable. So don't get too excited about today's surge as a "I missed the boat" sort of event. 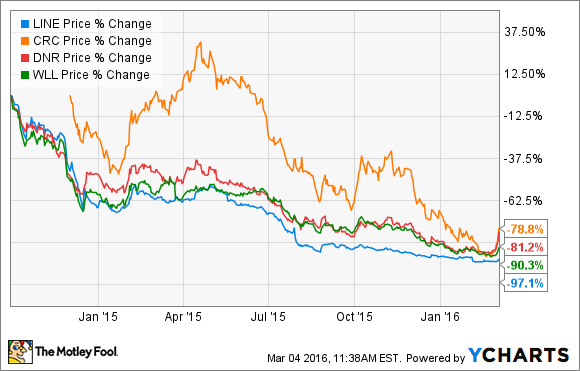 The theme of today's price surge is comprised of two things: improving oil prices and signs that bankers might be willing relax some debt covenants and obligations as many oil producers are under strain.

Oil prices have been the bane of these companies for some time, but as we start to see more and more 2016 capital budgets come in from producers, the more it looks like U.S. production is going to see some sizable declines that should help clear the glut of excess crude. This is an especially touchy subject for producers in more remote shale formations like Whiting Petroleum because crude from the Bakken and Niobrara shale has traded at a pretty sizable discount to U.S. benchmark crude prices.

Of course, as is the case on any given trading day, there is always the chance that Wall Street could take back those gains just as quickly if it gets scared of Iranian oil coming on line this year or whatever currently unforeseen event is around the corner.

Having bankers be a little more lenient on borrowing terms, however, is something that is certainly worth watching in the coming quarters. Just this week, LINN Energy announced that it was failing to meet the covenants on its credit line with lenders, and is now in talks to renegotiate them. As more and more companies are in similar positions, lenders could be coming to the realization that they could be stuck owning a lot of oil and gas properties in bankruptcy if they aren't willing to let some of these companies work through this downturn.

Now What: It's too soon to say whether this oil price rally is the beginning of the end of low oil prices. The reason that prices should rise over time -- production declines -- haven't set in yet and there are wild-card factors that could still keep oil production levels high. So investors should still be prepared to see share prices of these companies decline again. The encouraging news here is that lenders may be willing to let these companies ride out the tough times, which gives all of these companies a longer runway to see oil prices rise and help them all get their financial houses in order.