Seadrill was the ship that towed everyone else to big gains today, even if it was something that only effected Seadrill long term.

What: Shares of just about every oil and gas related company were up today, but one of the biggest gainers today has been Seadrill (SDRL) and its more than 100% - yes that's right, 100%. Its performance was so strong that it even helped to lift the likes of its peers by more than double digits. As of 3:15 pm EST, shares of Ensco (VAL), Transocean (RIG 0.00%) Noble Corp (NEBLQ), and Tidewater (TDW) are up by double digits. 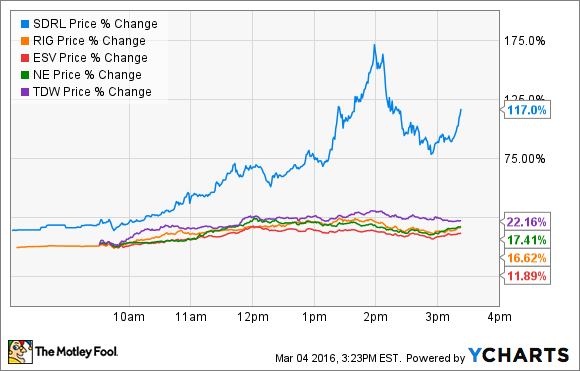 So What: You know the old saying that a rising tide raises all ships? Well, today looks like one ship is actually helping raise the tide for everyone. There has been some speculation recently that Seadrill's founder and Chairman Jon Fredrikson is raising cash from some of his other investments to inject some needed capital into the debt laden offshore company. That move has given investors a lot more confidence in the stock and it's causing short sellers to cover their positions in the stock.

When you step back and look at the situation, this is something that effects Seadrill and Seadrill only, and should have little to no bearing on the performance of its peers' respective performances. Then again, the market moves in mysterious ways sometimes.

The one company that actually had its own positive news today was Tidewater. The company won a case it had against Venezuela related to Venezuela's seizure of 11 vessels in 2009 as part of the country's effort to nationalize the oil industry. Tidewater has been granted $27 million of the $46 million compensation decision. The company expects to receive the remaining in the calendar year.

All of the companies here are facing two major problems: declining demand for rigs in general, and a swath of new rigs that were ordered years ago finally coming to market. This is leaving companies with a glut of non-active rigs and pretty sizable debt obligations -- Tidewater has support ships, but the same dynamics apply. Those with older rigs in their fleets such as Transocean and Noble have been scrapping older rigs and taking large charges to do so, and pretty much all of these companies have done something to lower their cash outflows through either debt restructuring or dividend cuts.

Now What: Anyone invested in Seadrill should be very happy that the company's founder is looking to step in and help keep the company afloat. The company's large debt load needs to be addressed and the interest costs related to it need to decline otherwise its less utilized fleet won't be able to keep up. For the rest, today's boost doesn't really mean much because it seems to have been driven by something that has almost no influence on the companies themselves. So take today's gains as a small relief from their multi year slides, but don't be surprised if they decide to start sliding again.