What: It's beginning to sound like a broken record, but Atwood Oceanics (ATW) is up double digits once again on Friday, jumping more than 10% by 2:45 p.m. EST. The offshore driller experienced similar moves on Monday, Wednesday, and Thursday. Add it up, and the stock is up more than 50% this week alone: 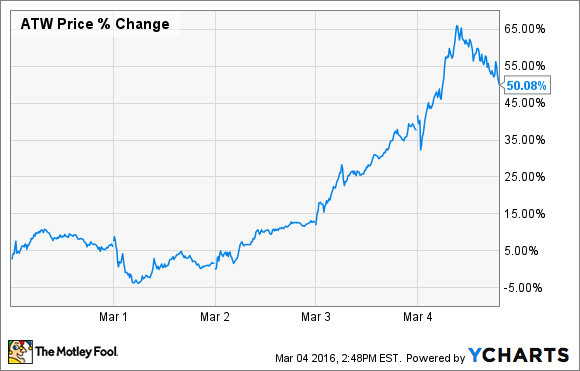 So what: The fierce rally this week is being fueled by two catalysts: Oil prices and short covering. We'll start with oil, which ended the week up 9.5%, to more than $35 per barrel. Oil is flying higher on the market's belief that progress is being made to address the oil glut. Not only is OPEC working on a coordinated effort to freeze its output and the output of other big non-member producers, but U.S. oil production is projected to keep falling. Combined, this should eventually help work off the glut of oil on the market, potentially leading to a much improved oil price later this year.

That more-optimistic market outlook is causing short-sellers to have second thoughts that a bankruptcy tsunami is on the horizon. Adding to that optimistic outlook is the fact that offshore drillers Noble (NEBLQ) and Seadrill (SDRL) both seemed to be taking steps to bolster their balance sheets, further muting bankruptcy fears. Noble, for example, announced it will spend $300 million to retire $200 million of its bonds at a discount, which will not only improve its balance sheet, but save it $10 million in interest per year.

Meanwhile, Seadrill is working on its own debt-reduction plan, with the market speculating that its Chairman, John Fredrikson, who owns 24% of the company, will lead a bailout of the company after he raised more than $500 million this week by selling a stake in another company he owns. That news caused the whole sector to spike this week, with Seadrill more than doubling.

Now what: Investors betting against offshore drillers are getting scorched this week. They are, in a sense, fighting each other to buy these stocks to cover short bets, which is fueling a big price spike. They're starting to doubt the thesis that the sector will sink into bankruptcy now that signs are emerging that oil prices and balance sheets are starting to improve.

However, both need to improve a lot more before "all clear" can be declared. Oil needs to more than double before oil companies will be incentivized to pour more money into offshore wells. Meanwhile, a net $100 million debt reduction from the sector is pocket change compared to the billions of dollars in debt yet to be addressed. In other words, the coast isn't close to being clear.

Investors Finally Figured Out What to Make of Atwood Oceanics, Inc.'s Earnings
401%