The No. 2 U.S. footwear maker returned to its pattern of beating the experts last quarter.

What: Shares of footwear-maker Skechers U.S.A. (SKX 2.00%) stepped up 16.8% last month, according to data from S&P Global Market Intelligence, on the back of a strong earnings report. 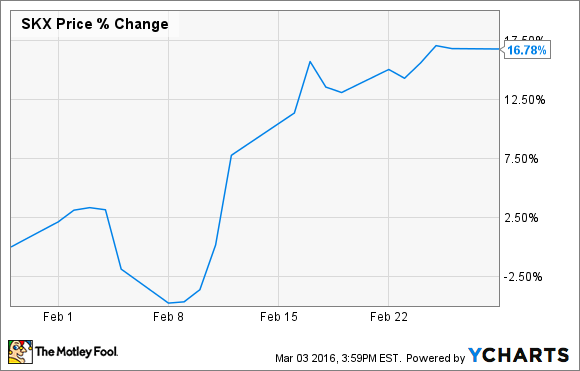 So what: Skechers delivered strong growth again as revenue jumped 27% to $722.7 million, well ahead of estimates at $693.5 million. Earnings per share at $0.19 was up from $0.14 a year ago but still a penny short of expectations, though the market overlooked that in favor of the impressive top-line growth. COO and CFO David Weinberg said the growth came across all key segments including men's, women's, and kids. International markets were also strong, and the company's backlog grew by nearly 10%.

Skechers recent growth has been driven by a push into running and casual footwear, signing sponsorships with musicians like Ringo Starr, Demi Lovato, and Meghan Trainor. The company also plans to open 330 to 340 retail stores, increasing its store count by about 25%. Weinberg said comparable sales growth was tracking in the mid-to-high single digits for the current year, and projected first-quarter performance would fall in line with analyst expectations with revenue of $885 million-$920 million and earnings per share of $0.50-$0.55.

Now what: With 35% growth in January, Skechers appears to be off to a strong start in 2016. The company has found a niche in casual shoes and sneakers that competitors like Nike and Adidas have ignored.

Skechers had been one of the best stocks on the market in 2014 and 2015 until its sales growth disappointed in its third-quarter report. That drop in the stock seemed to be reflective in part of the stock's overheated valuation and outlier quarter rather than a slowdown in performance. At a P/E of 22 and with strong growth momentum, the stock looks poised to move higher from here.

Jeremy Bowman has no position in any stocks mentioned. The Motley Fool owns shares of and recommends Skechers. We Fools may not all hold the same opinions, but we all believe that considering a diverse range of insights makes us better investors. The Motley Fool has a disclosure policy.