Honeywell International (NYSE: HON) is an industrial giant sporting an $80 billion market cap and annual revenues of roughly $38 billion. It's in strong financial shape and is still posting solid earnings despite a sluggish global economy. However, that doesn't mean you should ignore the risks the company faces.

An industrial is an industrial
The first thing to note about Honeywell on the risk front is that it's an industrial company. It's well diversified, with operations in aviation, automobiles, industrial controls (think thermostats and the like), and specialty chemicals, among others. But that doesn't change the fact that economic weakness is a notable headwind for industrial manufacturers.

And 2015 was a perfect example. If you pull out the impact of currency changes, Honeywell's core growth was basically flat year over year. Earnings were up 10% because of cost-cutting efforts. That slowdown in core growth was actually better than some peers; Eaton Corp. (NYSE: ETN) saw organic sales fall 2% last year, while ABB (NYSE: ABB) saw a 1% drop, pulling out the impact of currency changes.

So the first big risk to keep in mind about Honeywell, and all industrials, is that their results will wax and wane with the economic fortunes of their key market segments.

For Honeywell, some key industries to watch include construction and aviation. Although the company makes a broad array of products that get put into both commercial and residential buildings (about 24% of 2014 sales combined), a downturn in either would crimp results. Aviation, meanwhile, has been a growth area for many industrials, including Eaton, but if demand for new commercial aircraft should falter, Honeywell would quickly feel the impact (aircraft makers were 6% of sales). That would be even more apparent if there were a slowdown on the military side of things (about 12%), however.

That said, a drop off in travel could also hit the company's aviation aftermarket business (11% of revenues), which sells things like replacement parts. So even though Honeywell is widely diversified, there are a few areas, from a big picture perspective, that are worth keeping an eye on.

Around the world
Honeywell not only operates in many different industries, but its business also spans the globe. It's the same with competitors. For example, ABB generates only about 30% of its revenues from the Americas, a region that includes far more than just the United States. Emerging markets, meanwhile, make up around a third of its business. Honeywell gets a little over half of its revenues from North America. About 20% comes from emerging markets and "other."

In many ways, this diversification is a good thing. However, it means Honeywell is subject to the events taking place, economic and social, in countries well beyond the United States. So an economic slowdown in China or Europe (together a little over 30% of revenues) will have a direct impact on the company's results. In other words, you need to be aware of what's happening around the globe if you invest in Honeywell. 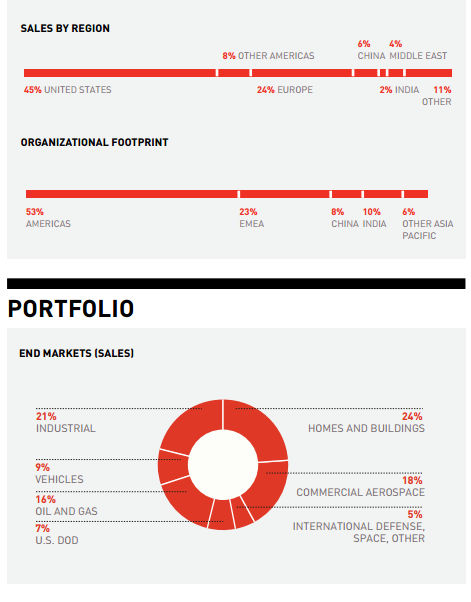 Make it rain
Along with the business-level issues that result from operating around the world, there's also an accounting factor to think about. That's because Honeywell reports earnings in dollars: What it earns in other countries has to be converted back to U.S. dollars. This can be a benefit when the dollar is relatively weak, allowing foreign currencies to buy more dollars. Or, like now, it can be a headwind, since foreign currencies buy fewer dollars when the dollar is strong.

That said, over time, the currency effect should balance out and be a non-issue. But that doesn't mean investors won't react to the changes over the short term. So, as a long-term investor, you'll want to make sure you pay attention to core numbers that pull out currency changes. That way you'll be focused on the underlying business instead of the impact of temporary, though sometimes material, currency shifts.

Restructuring and more
The last issue to keep in mind is the nature of Honeywell. It's an industrial conglomerate. That means the company is kind of like a portfolio of different businesses that will shift and change over time. You always have to be mindful of acquisition and disposition activity.

And don't forget the constant need to trim the fat, at times. Big companies like Honeywell tend to have cycles of growth followed by cycles of cost-cutting. In fact, both can be taking place at the same time, depending on the divisions you're talking about. That means Honeywell, and its peers, are pretty much always working on reducing expenses. So costs, and the efforts to keep them in check, are another key issue to monitor. It was cost-cutting that allowed the company to expand margins in 2015 and boost earnings by 10% despite growth headwinds and the dollar's strength.

Not so risky, really
From a big-picture perspective, Honeywell isn't all that risky. It has a diversified business that spans the globe providing the things the world needs to keep businesses running. However, that's kind of a long-term view of things. Over shorter periods, Honeywell will be affected by economic weakness, industry-specific and country-specific events, currency fluctuations, and a near-constant need to shift and adjust its portfolio to the current market. You shouldn't go in worrying too much about all of these things, but you certainly shouldn't forget about them, either. In fact, if you take a long-term view, some of these near-term problems could open up a buying opportunity for you.