Southern Company is on the verge of a few big changes that could lead to higher share prices ahead.

Southern Company (SO -0.30%) has a lot of moving parts right now, and a couple of those shifting cogs haven't been working as smoothly as planned. But it looks like things are getting better, and in a big way. Here are three reasons Southern Company stock could rise.

A smooth acquisition
One of the biggest moving parts at Southern today is its proposed $12 billion acquisition of AGL Resources (GAS). Southern is predominantly an electric company and AGL a natural gas company. Their operating regions overlap to a large degree, and because they don't directly compete the businesses should be complimentary. With natural gas becoming an increasingly important fuel source, this looks like a good move for Southern. It will roughly double the utility's customer count and provide another avenue for capital investment-led rate growth.

More important, if things go smoothly, which is never a sure thing, Southern plans to reward investors by increasing the rate at which its dividend has been growing. So if everything goes as planned with AGL, investors will probably revalue Southern Company shares higher once the deal is fully consummated.

Big projects
The next issue to monitor is Southern's two big power plant construction efforts. This has been a negative for a number of years, as delays and cost overruns have hit both its clean coal with carbon capture and nuclear power plant building projects. However, 2016 could be the year that both turn a corner.

For example, the clean coal plant is actually nearing completion. Getting that done will be a huge weight off Southern's neck. But there's more here than just a mood of "thank goodness it's finally done." This plant will be the first U.S. facility with a large scale carbon capture system. That not only sets up the company to continue using dirty coal in a clean way, but Southern also happens to own a piece of the carbon capture technology.

A South Korean utility is already looking to license that tech. So if all goes well with the carbon capture plant, Southern could find it has a new plant and a new profit center.

The nuclear project isn't expected to be done for a few more years. However, Southern just rejiggered the construction team on the project. If that leads to better execution, than this weight would be lifted, too. So a turn for the better at both of Southern's big utility projects could lead investors to reward the shares with a higher valuation. 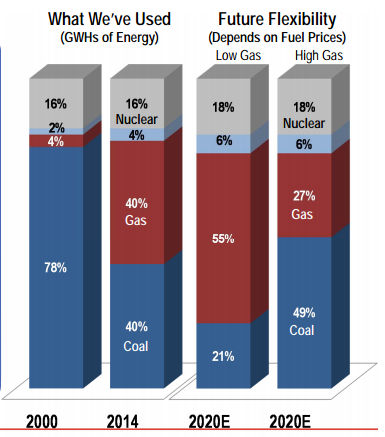 Rising natural gas prices
This one is a little counterintuitive, but it's worth understanding. At the turn of the century, Southern generated roughly 80% of its electricity from coal. Last year that figure fell to around a third, with natural gas accounting for nearly 50%. That's a hard shift toward natural gas, which is pretty much the big trend in the utility industry.

So in some ways, a spike in natural gas prices would cause Southern to pass higher costs on to its customers. Not only do customers find this less than desirable, but regulators can take a dim view of rising bills, too.

But Southern is a very conservative company and it believes strongly in fuel diversity (which explains why it's building both nuclear and a carbon capture coal plants). The utility's long-term goal is to be able to shift between the cheapest fuel source, with coal accounting for as little as 20% or as much as 50% of its fuel. As other utilities shut down coal and shift toward gas, keeping its options open could allow Southern to protect its customers from rising bills and, in the end, keep its regulatory relationships in a positive place.

Right now, market watchers are high on natural gas and renewable power, but this is a sleeper issue that could lead investors to price Southern differently from the pack.

Looking up, finally
Southern has been a hard stock to love for a while, as construction issues have led to both bad press and costly one-time charges (more than one, actually). But as 2016 gets under way, things are starting to look better for the utility. If the merger with AGL goes well and its construction efforts start to go more smoothly, Southern Company's stock could rise. On a more subtle level, however, don't overlook the fuel source issue. If natural gas prices start moving higher, the ability to shift to the lowest cost fuel will keep customer and regulators happy, which, in turn, should keep investors happy.