Please ensure Javascript is enabled for purposes of website accessibility
Log In Help Join The Motley Fool
Free Article Join Over 1 Million Premium Members And Get More In-Depth Stock Guidance and Research
By Demitri Kalogeropoulos - Mar 8, 2016 at 11:25AM

The retailer misjudged demand over the holiday season and so profits will suffer this year as it works to clear out excess inventory. 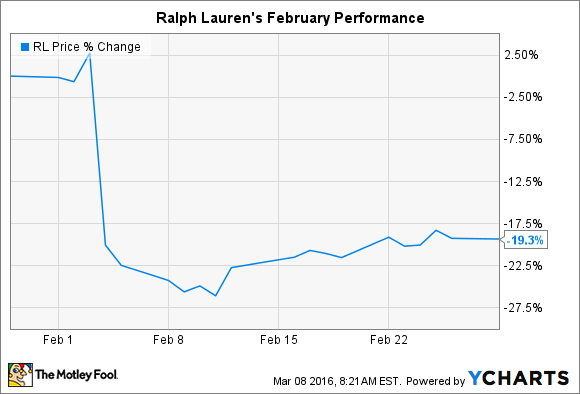 The drop left shareholders down by more than 20% over the last one- and five-year time periods.

So what: February's slump came after the company posted surprisingly weak earnings results for the holiday quarter. Adjusted revenue declined by 1%, compared to the 1% gain that management had forecast going into the critical selling period. New CEO Stefan Larsson admitted that the executive team was "disappointed" with the results, which were marked by a 5% drop in comparable-store sales.

Gross margin held up in the face of intense competition from rival retailers, though, and disciplined expense management helped operating margin jump to 13.7% of sales from 12% the prior year. That outperformance helped Ralph Lauren beat consensus profit expectations by generating $2.27 per share of earnings ($0.12 per share higher than Wall Street's forecasts).

Now what: However, the company's updated outlook revealed that the profit boost won't carry on into the new calendar year. In fact, operating margin for the current quarter should dive lower by 4 full percentage points, management warned, as Ralph Lauren works to clear out all of the excess inventory it built up over the prior quarter.

For the full year, executives see sales ticking higher by just 1% as profitability declines. That's an uninspiring outlook, but Larsson promised big operating shifts ahead that are aimed at ushering in improving results. "I am finalizing an extensive assessment into all aspects of the Company," he said, "and working with my team to build a comprehensive strategic and financial plan to win."