Where next for the diversified industrial now that its merger talks with United Technologies are seemingly over?

Following its aborted bid for United Technologies (RTX 0.55%), Honeywell International's (HON -0.14%) 2016 investor conference gave management an opportunity to redefine its strategic future to the analyst community. In the end, management outlined a mix of near- and long-term catalysts that should help investors decide what to do with the stock. Let's take a closer look at them.

All told, Cote argued that the bid didn't mean Honeywell was necessarily looking for a major acquisition, and the company has growth prospects of its own. Still, that he entertained taking on United Technologies is an indication that conditions are ripe for Honeywell to make a large acquisition, so keep an eye on events.

2. Calling a bottom in its oil and gas business
In the last year or so, investing in an industrial stock with a significant oil and gas component has been a punishing exercise. Honeywell estimates 14% of its sales will come from oil and gas.

However, it's not all doom and gloom. In fact, Honeywell's oil and gas business has growth prospects for three main reasons:

All told, Cote predicts that Honeywell's oil and gas operations will pass an inflection point in 2016 and deliver around $200 million in revenue growth in 2017.

3. Aerospace set for long-term growth
In common with United Technologies, Honeywell faces headwinds in its commercial aerospace operations in 2016. In both cases, it's a consequence of new airplanes entering the marketplace. United Technologies forecasts aerospace systems operating profit growth to be flat to negative $50 million because of negative effects on volume mix (to the tune of around $325 million to $300 million) of selling newer, initially lower-margin, products.

Meanwhile, Honeywell is giving incentives to get new aircraft platforms in order to spur long-term growth. Honeywell Aerospace CEO Tim Mahoney produced a useful slide outlining the specific programs, with heavy exposure to three highly successful programs. For reference, the Boeing 737 MAX has 3,073 unfilled orders to February, with the Boeing 777 X at 306 unfilled orders, and the Airbus 350 at 777 orders. 4. Growing software and industrial Internet of Things
It wouldn't be a presentation by a major industrial company without a segment on the industrial Internet, and clearly it isn't just lip service with Honeywell. Half of its engineers are employed in developing software, and management expects 77% of its growth from its breakthrough initiatives in the next five years to involve a software component. All of this is intended to lead to 66% of aerospace sales and 81% of automation and control systems sales containing software by 2020.

5. Segment margins will continue to grow
Honeywell managed to expand adjusted operating margin by 280 basis points to 17.9% in 2015, and despite core organic growth only increasing 1% (reported sales were down 4%), the result was adjusted EPS growth of 10%.

The good news is that despite management forecasting just 1% to 2% organic sales growth for 2016 (leading to adjusted EPS growth of 6% to 10% in 2016), margin expansion is set to continue in the coming years. 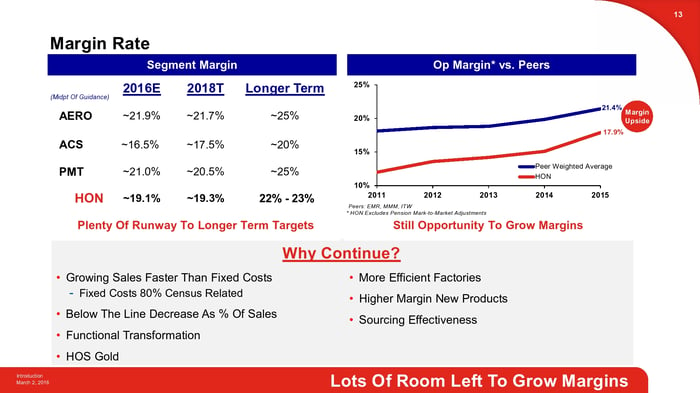 Where next for Honeywell International?
All told, it was a pretty good presentation that helped investors refocus on the underlying growth prospects at the company. Ongoing margin expansion in the near term while building long-term profit growth through investments in the industrial Internet and getting on aerospace programs provides the stock with a compelling mix of attributes.

With or without United Technologies, Honeywell International is an attractive stock.