A weak monthly sales report pushed the stock down, but it wasn't deserved.

What: Shares of L Brands (BBWI 6.81%) fell 12% last month according to data from S&P Global Market Intelligence as the stock sold off following its January sales report. The stock failed to recover despite a strong earnings report later in the month.

So what: The parent of Victoria's Secret got knocked down a peg when it posted a surprise decline in January same-store sales, which fell 2% against expectations of an increase of 2.4%, and after an 8% jump in December. The company blamed the shortfall on a shift in a semi-annual sale from January to December, and noted that same-store sales were up 6% for the entire fourth quarter, an impressive result during a period when many other retailers were struggling. 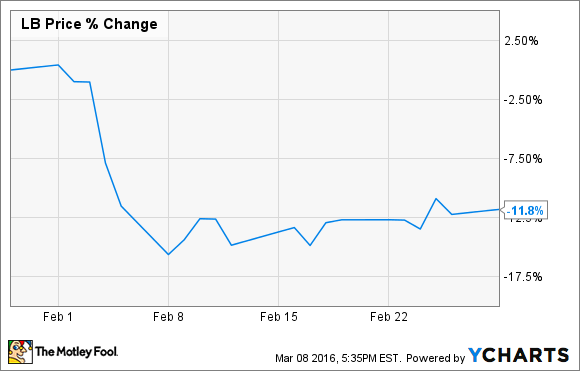 Investors were unimpressed, however, even as the company raised its quarterly dividend 20% to $0.60 and announced a special dividend of $2.00. The stock dropped a few more points on February 12 after Victoria's Secret CEO Sharon Turney suddenly resigned. Turney said she was stepping down to focus on her family and personal life, and will stay on to serve as an advisor. L Brands CEO, Leslie Wexner, will take over her role.

Finally, the company, which also owns Bath & Body Works, reported its full fourth-quarter earnings report, beating analyst expectations but posted weak guidance for 2016. Its earnings per share of $2.15, topped the consensus of $2.05, but the retailer projected 2016 EPS of $3.90-$4.10, below the Street's view at $4.20.

Now what: In its February sales report, the company said comparable sales jumped 5%, an indication that it's returned growth following the disappointing January results. Considering its otherwise strong quarterly report, the sell-off seemed odd as the January performance was mostly an anomaly. L Brands is one of the few retailers posting consistent comparable-sales growth, and the stock trades at a modest valuation. I'd expect to recover last month's losses in due time.