Please ensure Javascript is enabled for purposes of website accessibility
Log In Help Join The Motley Fool
Free Article Join Over 1 Million Premium Members And Get More In-Depth Stock Guidance and Research
By Reuben Gregg Brewer - Mar 14, 2016 at 11:15AM

Mosaic sells commodities to commodity producers, but there's a growing appetite for the products it makes.

When you boil things down, Mosaic Co. (NYSE: MOS) produces commodity products, plain and simple. It's main market, fertilizers and agricultural products, has been a pretty rough one as of late. Slowing economic growth, particularly in China, and too much production have led prices lower throughout the commodities markets. However, the market Mosaic serves is a little different than most, and that's important to keep in mind. Here's your five-minute guide to Mosaic stock, to help you understand the nuances that make Mosaic different from others in commodity markets.

Not all commodities are equal
In some ways, Mosaic is no different than other miners like Rio Tinto. That said, Rio Tinto mines for things such as iron ore and copper. Demand for these commodities tracks very closely to global economic growth and, in recent years, has been largely driven by the slowing Chinese market.

Iron ore is one of the hardest hit commodities, but it paints a clear picture of how bad things have gotten in commodity land. But here's the thing: Mosaic's commodities are a bit different from iron ore, copper, coal, and the like. Mosaic produces phosphate and potash, agricultural commodities that are used to fertilize crops.

Farmers need fertilizer if they are going to grow things such as corn and wheat. Supply and demand for these products will dictate how much gets grown, but it's different from, say, making steel for cars or buildings where cyclical swings can be quite large. Unless there's an overnight change in global population stats, food has pretty solid underlying demand fundamentals.

Which helps explain why Mosaic's prices for phosphate and potash fell about 8% and 14%, respectively, last year. That's not good, but it's a whole lot better than Rio's iron ore hit. So one of the first things to understand here is that global supply and demand dynamics are important, but Mosaic operates in a slightly different part of commodity town.

Different, but similar
There's another wrinkle here, however. That's because Mosaic teams up with Potash (NYSE: POT) and Agrium (NYSE: AGU) to sell potash. This consortium used to compete with another consortium based in Europe, but that European group has fallen apart. So part of the pricing issue today is related to commodities and part is related to a shift in the competitive landscape of the fertilizer market, as some companies have been willing to sacrifice pricing to gain market share. The new industry dynamic is still playing out. 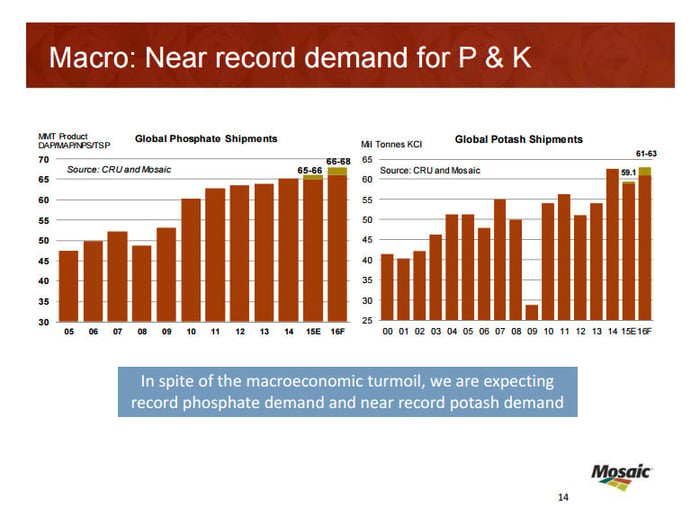 All of this said, there is an oversupply in the markets that Mosaic serves today as new production comes on line. But the major industry participants are working to rein that in, just like so many other commodity players. For example, between 2014 and 2018, Mosaic is trying to shut down 600,000 tonnes of its own potash supply. It estimates the industry will close around 5 million tonnes of supply. Production is also being trimmed, with curtailments of some 1.8 million tonnes. So despite the differences between fertilizers and, say, iron ore, you still need to keep an eye on supply and demand.

Big picture
But here's the thing: The underlying demand for agricultural products really charts its own course. And that course pretty much follows the number of mouths the world has to feed -- not the number of cars being built or buildings being erected. And when it comes to demand for food, the direction appears to be a steady upward climb.

The United Nations estimates that there are around 7.3 billion people in the world today. That's a lot of mouths, but by 2030 that number should reach around 8.5 billion, in 2050 it's expected to reach 9.7 billion, and by 2100 it will be a massive 11.2 billion. The trend is pretty clear -- more and more people. That will clearly help demand for all commodities, but food is a consumable, and you have to keep replacing it or people starve.

Adding to this trend is that wealthier countries tend to need more grain to produce the food they consume. Since more and more countries are moving up the socioeconomic ladder, demand for grain, and thus phosphate and potash, will get a double boost. In other words, Mosaic has a pretty solid underpinning for its products with a solid long-term picture for future demand growth. In fact, despite the oversupply and weak pricing, demand for phosphate and potash remain near record levels.

An important player, but...
Some other things to note about Mosaic are company specific. For example, it is the world's largest producer of phosphate. And, notably, by producing its own phosphate it can keep costs relatively low compared to marginal fertilizer companies that have to buy phosphate. That's a benefit today, but it can only do so much since, at the end of the day, the company's revenues are tied to commodity prices. In other words, it's good but it's not enough to stave off the impact of a weak pricing environment. On the potash side, the company is in the top five production wise, but its costs are higher than peers like Potash. So, really, the company's strength is on the phosphate side of things.

Financially speaking, Mosaic's debt is roughly in line with peers like Potash. However, it has more cash and short-term assets floating around. For example, Mosaics current ratio, current assets divided by current liabilities, was roughly 2 at the start of the year. Potash's current ratio was about 0.9. Essentially, if the fertilizer market were to really hit the fan, Mosaic would have enough cash to keep going for a while and Potash could have trouble paying its near-term bills. Which may help explain why Potash cut its dividend and Mosaic didn't.

The runway is still there
Mosaic is, indeed, a commodity producer subject to some of the same market dynamics as any other commodity company. But its markets are a bit different because they involve the production of food. And that provides a very long runway for growth, because the world seems to keep making more mouths to feed, which could make the current sell-off a buying opportunity for contrarian investors.