Energy Transfer Equity (NYSE:ET) has gotten itself into quite a pickle. The midstream general partner thought it was creating an energy infrastructure giant when it finally convinced Williams Companies (NYSE:WMB) to join its family. That move, however, has clearly backfired, resulting in some really bizarre storylines surrounding Energy Transfer Equity in recent days.

About a month ago, the entire Energy Transfer Equity family, along with potential future family members Williams Companies and Williams Partners (NYSE: WPZ), plunged after the company announced it had replaced its CFO: 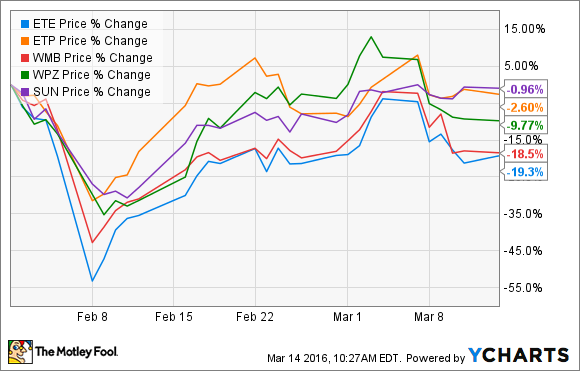 Investors saw the move as a sign that the company's financials might be in trouble, though the company quickly denied that the move was being made because of any disagreement over accounting or financial matters. In fact, it had offered its CFO another position within the company. However, in time, the market learned that the CFO was apparently actively working to nix the merger with Williams Companies by reportedly calling major shareholders and asking them to vote against the deal. He saw the $6 billion cash portion of the deal as "mutually assured destruction" because Energy Transfer Equity was taking on $6 billion in debt to make that payment.

He's now suing the company for breach of contract by firing him, alleging that the termination was "motivated by an agenda unrelated" to his performance. That's adding even more drama to an already dramatic situation.

Searching high and low for cash
When Energy Transfer Equity initially made an offer to buy Williams Companies, it made an all-equity offer, which Williams rejected before settling on a cash-and-stock offer. However, it's that cash portion of the deal that's turning out to be a real problem, which is why Energy Transfer Equity's now ex-CFO was reportedly working to scuttle the deal. The big concern is that the added $6 billion in debt could come back to bite the company in the future by limiting its financial flexibility.

In order to improve its financial flexibility, Energy Transfer Equity is exploring a number of options to boost its cash position. To that end, the company recently completed a private offering of convertible shares to some of its investors, which resulted in those holders agreeing to forgo receiving some of their distributions for up to nine quarters. That retained cash would then be used to pay down some of the debt incurred to acquire Williams Companies. That savings aside, what's really curious is that only some investors were allowed to participate in the offering because Williams Companies wouldn't allow its accounting firm to sign off on it. Clearly, the company didn't like the proposal.

In addition to that, Energy Transfer Equity is reportedly exploring the sale of its general partner interest and the incentive distribution rights in gas station and convenience store operator Sunoco (NYSE:SUN). That stake is said to be valued at as much as $2 billion and was acquired just last year from its namesake MLP Energy Transfer Partners (NYSE: ETP). That transaction was part of the company's transition to a pure-play diversified general partner, but desperate times often call for desperate measures.

Meanwhile, Energy Transfer Partners, which has been slowly dropping down its retail assets to Sunoco, now owns a 36.4% stake in the company as part of those drop-down transactions; however, it too would likely sell that stake as part of any deal. That would bolster its own cash position, which is somewhat necessary given that its access to the capital market has been effectively shut off amid the crash in the energy market and the drama surrounding its parent company.

Investor takeaway
Energy Transfer Equity has really made a mess of things. It so desperately wanted to acquire Williams Companies that it made a deal that, in hindsight, is turning out to be a disaster. Not only is the deal causing a lot of drama because of the open battle between the company and a former top executive, as well as between the company and Williams, but because the added debt could really limit the company's financial flexibility going forward. It's getting to the point where the deal either needs to be restructured, or it needs to fall apart, because in its current form, it could be Energy Transfer Equity's undoing.

What in the World Is Going on at Energy Transfer Equity LP? @themotleyfool #stocks $WMB $ET $SUN Next Article
Current