Please ensure Javascript is enabled for purposes of website accessibility
Log In Help Join The Motley Fool
Free Article Join Over 1 Million Premium Members And Get More In-Depth Stock Guidance and Research
By Brian Feroldi, Sean Williams, and Cheryl Swanson - Mar 18, 2016 at 8:22AM

The broader market has mostly rebounded from its early 2016 tumble. The biotech sector hasn't, and our contributors see some bargains available in it now.

The broad S&P 500 has rallied over the last few weeks, and it has largely recovered from the beating that it took early in the year. The biotech sector, however, hasn't fared quite as well. Many biotech stocks are still way down for 2016, and the iShares NASDAQ Biotechnology Index (IBB 2.02%) -- an ETF that focuses on the sector -- is off more than 24% since the start of the year. 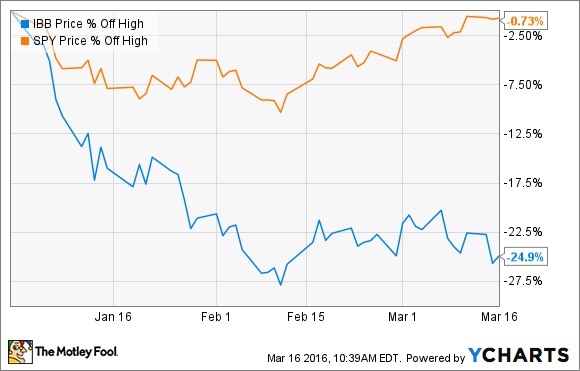 That disconnect could make this a great time to go bargain hunting in the sector, so we asked three of our Motley Fool healthcare contributors to pick through the carnage for potential winners. Below, each has highlighted a biotech stock that they think is a smart buy right now.

Brian Feroldi: Clinical-stage biotechnology companies are particularly prone to wild price swings, affording brave long-term investors plenty of opportunities to buy when Wall Street sours on the entire sector. One stock that I have my eye on is Coherus BioSciences (CHRS 6.75%), a small-cap biotech that specializes in creating biosimilars. These are essentially generic versions of biologic drugs, though creating such treatments is far more challenging than developing a generic for a chemically synthesized drug.

Shares of Coherus are down nearly 50% from their 52 week highs, which makes it an interesting time to give this biotech a closer look.

The year ahead should be an exciting one for investors -- Coherus plans to submit three of its biosimilar compounds for regulatory approval. The one that looks likely to be in regulators' hands first is CHS-1701, a biosimilar version of Amgen's white blood cell boosting drug Neulasta. Coherus is completing its final study of CHS-1701 now, and plans to submit the drug to the FDA sometime in the middle of the year. If the company can win approval, then it's staring down a massive opportunity. Amgen sold more than $4.5 billion worth of Neulasta in 2015, so if Coherus can wrestle away even a small fraction of market share, it could be enough to turn the company profitable. Add in Coherus' two other late stage biosimilar product candidates, and the company's addressable market jumps to more than $25 billion.

Coherus' bank account looks flush right now: The company ended 2015 with more than $158 million in cash, and it just raised another $100 million through a convertible notes offering. That should give the company plenty of firepower to continue to advance its candidates along the regulatory path. Add it all up, and this could be a great time to consider adding a few shares of Coherus to your portfolio.

Cheryl Swanson: Allergan (AGN) looks like a great bargain right now, with its planned merger with Pfizer on track for the back half of this year, and the sale of its generic unit to Teva Pharmaceutical happening in April. I suppose some might quibble that Allergan is not technically a biotech, but the company's double-digit top-line growth certainly makes it look more like one than a traditional pharma.

Pfizer's deal to purchase Allergan initially valued the target at over $363 per share -- more than 30% higher than the stock was trading Wednesday. And what if merger falls through? Regardless, the company appears markedly undervalued on a stand-alone basis. After all, some analysts put Allergan's 12-month price target as high as $400 before the Pfizer deal was announced.

Allergan's existing drugs are knocking it out of the park, with Botox, Restasis, and Linzess posting constant-currency growth of 15%, 19%, and 39% respectively for the fourth quarter. Add in the new products -- especially Viberzi, a recently launched irritable bowel syndrome treatment -- and the prospects for continued strong organic growth appear very solid. In sum: whether or not the Pfizer deal goes through, Allergan's recent pullback looks like a profit-making opportunity for investors.

Sean Williams: There are plenty of profitable biotech stocks on sale given the meltdown the industry has experienced since the beginning of the year. Yet, my pick for a bargain that could be worth scooping up is one with just a single drug in development and no profits to speak of: Geron (GERN 5.48%).

Geron's key product is imetelstat, an experimental oligonucleotide that's designed to be an inhibitor of telomerase. The good news is I don't need to throw scientific words at you to describe how exciting a drug imetelstat could wind up being.

In early-stage clinical studies that tested imetelstat as a treatment for myelofibrosis (MF), a rare cancer of the bone marrow that leads to scarring, some patients were observed with partial, and even complete, responses. This is noteworthy because no prior clinical study for MF patients utilizing any therapy had exhibited a clinical response. In fact, the only approved therapy for MF is Incyte's Jakafi, a JAK inhibitor that merely reduces symptoms associated with MF, such as enlarged spleen and anemia. The assumption here is that if imetelstat were to make it to market, it would displace Jakafi as the preferred MF treatment.

Imetelstat has also attracted the attention of Johnson & Johnson, which gave Geron $35 million up front and dangled an additional $900 million for meeting developmental, regulatory, and commercial milestones. Not only does Johnson & Johnson have deep pockets and an experienced sales staff to help Geron, should imetelstat win approval for MF and/or myelodysplastic syndrome, but J&J also has a knack for picking winners from the small-cap realm. Its last partnership with Pharmacyclics more than five years ago yielded the blood cancer drug Imbruvica, which may wind up doing more than $7 billion in peak annual sales.

Geron's roughly 40% tumble from its peak could represent a nice opportunity for biotech investors who have a higher tolerance for risk.