Are domestic tobacco companies about to burn out after a blistering multi-year rally?

Shares of Altria (MO -0.85%) and Reynolds American (RAI), the two biggest domestic tobacco companies, respectively rallied about 20% and 45% over the past 12 months. Both stocks easily outperformed the S&P 500's 2% decline due to four factors: cigarette sales rose due to lower gas prices, investors fled to consumer staples stocks amid market volatility, dividend yields remained attractive due to low interest rates, and both companies were insulated from currency fluctuations.

But after that big rally, some bearish critics believe that both stocks are due for a pullback. In a recent Bloomberg article, Jennifer Kaplan claims that "the long rally in U.S. tobacco company shares may be about to burn out." Kaplan cites five bearish factors: high valuations, falling dividend yields, declining smoking rates, rising taxes, and waning demand for e-cigarettes. Let's take a closer look at that bearish case and see if both stocks are actually overvalued.

Valuation and dividends
Altria's trailing P/E of 23 is currently at its highest level since it divested its stake in Kraft Foods in 2007 and spun off Philip Morris International in 2008. Reynolds American has a P/E of 20, which retreated from a multi-year high after it reported its first two quarters with Lorillard's sales included. Those ratios are in line with the tobacco industry and the S&P 500, which both have a P/E of 22. Therefore,  Altria and Reynolds' P/Es are high, but it would be a stretch to call them "overvalued".

However, many investors buy tobacco stocks for their big dividends. On that front, Altria's 3.6% yield and Reynolds' 2.9% yield are near all-time lows due to their rising stock prices. So from an income investor's point of view, both Altria and Reynolds might look "overvalued". 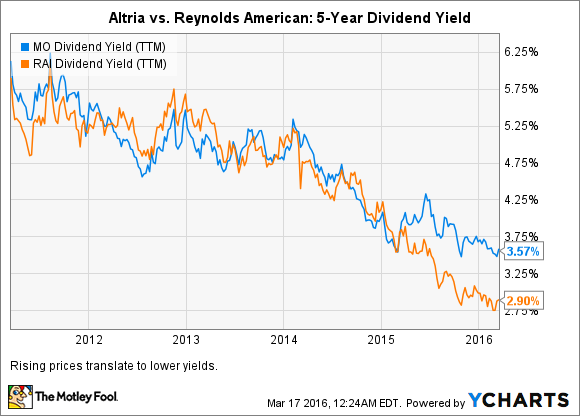 Falling smoking rates and rising taxes
It might seem like Altria and Reynolds American's dependence on the U.S. tobacco market is unsustainable, since the smoking rate in America has declined from 23% to 15% between 2000 and 2015. Taxes are also rising -- since the beginning of 2000, U.S. states have passed 130 state cigarette tax hikes. On the federal level, the Obama Administration raised the federal tax rate for a pack of cigarettes from $0.39 to $1.01, and recently proposed to raise that rate by another $0.94.

These challenges have caused cigarette shipments to slide, but Altria and Reynolds American offset declining shipments and sales with price hikes, cost cuts, and stock buybacks. As a result, sales growth remains flat, but earnings -- which are crucial for dividend growth -- continue rising. Between 2010 and 2015, Altria's annual revenue only rose 4%, but its EPS rose 43%. Reynolds' annual revenue fell 1% between 2010 and 2014 (its last full year before buying Lorillard), but its EPS also jumped 43%.

The average price per pack of Altria's Marlboros in the U.S., including excise taxes, is just $6.50, according to Numbeo. Customers in the U.K. and Australia, which have comparable smoking rates as the U.S., are respectively willing to pay $12.14 and $17.50 per pack. Therefore, falling smoking rates and rising taxes will eventually hurt Altria and Reynolds, but I believe that they still have plenty of room to raise prices.

Falling e-cig sales
Big tobacco companies consider e-cigarettes to be a promising new growth market. Reynolds' Vuse is the most popular e-cigarette brand in America, with 24% of the market, while Altria's MarkTen only controls a single-digit share. Kaplan notes that sales of electronic smoking devices have declined annually over the past three months, and that new FDA regulations could prove that long-term estimates might be "too optimistic". E-cig sales certainly look weak now, but newer variations, like "hybrid" e-cigarettes (which add small amounts of tobacco to improve flavor) could revive public interest.

Investors should also note that e-cigs still generate such a tiny percentage of Reynolds and Altria's revenue that sales aren't reported separately. For example, sales of Reynolds' e-cigarettes are grouped together with other products like nicotine gum, which together accounted for just 3% of its sales last year. Therefore, weak e-cigarette sales are disappointing for Reynolds and Altria, but won't likely hurt their overall top line growth.

That cycle can't last forever, but it won't break down anytime soon. Therefore, as long as gas prices remain low, the dollar remains strong, and cigarette prices don't get bumped up to $10 per pack nationwide, I believe that both stocks still have room to run.

Leo Sun owns shares of Philip Morris International. The Motley Fool has no position in any of the stocks mentioned. We Fools may not all hold the same opinions, but we all believe that considering a diverse range of insights makes us better investors. The Motley Fool has a disclosure policy.