The worst energy crash in half a century has left long-term dividend investors with a remarkable opportunity to buy high-quality, high-yield midstream MLPs at severely undervalued prices.

However, the challenge is determining which MLPs truly represent great values and which are high-yield value traps. Take for instance, Energy Transfer Partners (NYSE: ETP) which has underperformed its peers over the past year by a significant margin. 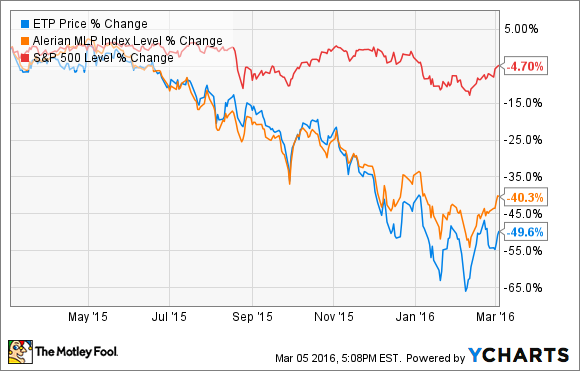 Given Energy Transfer's business model that's built on long-term, fixed-fee contracts -- which are theoretically immune from commodity prices -- what explains 2015's weak results; especially the alarming decline in the MLP's coverage ratio? The answer lies in several problems that make Energy Transfer one of the poorer choices in this industry.

First, management chose to unwisely make distribution growth a priority in 2015, despite the continuing decline in energy and its unit price. This was probably to try to support the unit price which would theoretically make raising equity capital cheaper and more profitable.

However, Wall Street's panicked rush to dump all things oil and gas related overwhelmed the payout increases and the 150.1 million units Energy Transfer Partners' issued in 2015 ended up selling at extremely low valuations. This resulted in 42.2% year-over-year dilution that brought the more expensive payout to the brink of unsustainability.

Another negative factor last year was that Energy Transfer's quarterly earnings revealed that its contract mix didn't provide nearly the cash flow security investor's expected. For example, while 80% of 2015 volumes were technically "fee-based," only 64% of its volumes were protected by minimum volume guarantees.

This exposed Energy Transfer Partners' to declining volumes and cash flows when oil and gas producers in North Texas, Oklahoma, and the mid-continent region began cutting back production.

Distribution profile is getting hammered by oil crash

As you can see Wall Street is pricing Energy Transfer Partners as if its distribution is at high risk of a short-term cut. In addition analysts aren't very optimistic about the MLP's long-term growth prospects.

Given Energy Transfer's 39% decrease in annual DCF per unit both facts are understandable. However, analyst projections are educated estimates at best and always need to be taken with a grain of salt. After all, Energy Transfer Partners does have a growth project backlog of around $9 billion scheduled to come online through the end of 2017 that could theoretically boost its distribution coverage and future payout growth beyond Wall Street expectations. 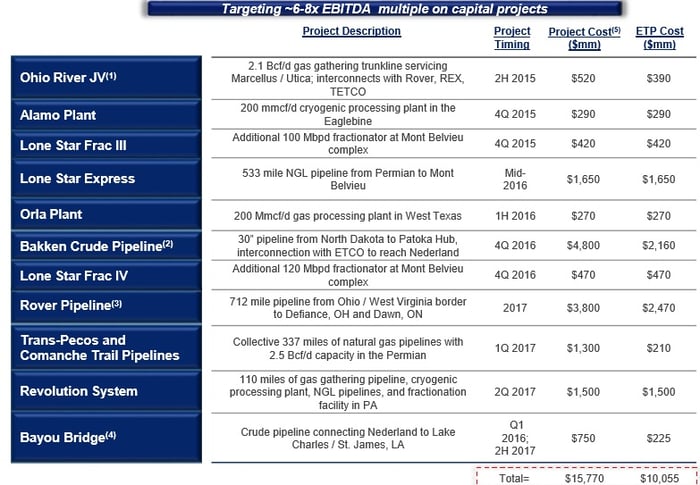 In addition, its sponsor Energy Transfer Equity (NYSE:ET), thanks to its 2015 $38 billion buyout of Williams Companies (NYSE:WMB), oversees America's largest pipeline empire and has access to vast oceans of potentially valuable assets it could theoretically use to bail out its troubled MLP.

Management is quick to point out that it has $1.36 billion in available borrowing power remaining under its $3.5 billion revolving credit facility, which has an interest rate of just 1.86%.

However, given the MLP's debt/EBITDA or leverage ratio of 4.5, (as measured under its credit agreements) it might not actually be able to borrow the full amount because that same credit facility includes covenants that limit its leverage ratio to 5.0.

As for financial salvation coming from Energy Transfer Equity, investors shouldn't count on that because it turns out that the Williams Companies acquisition, given current market conditions, has become a nightmare.

Bottom line
Energy Transfer Partners' may not be the worst midstream MLP investment prospect you can buy but it's also far from the best. Given its: relatively poor contract mix, limited access to cheap growth capital, and its sponsor's own financial difficulties, I think it wise for dividend investors to steer clear of this troubled pipeline giant for now.